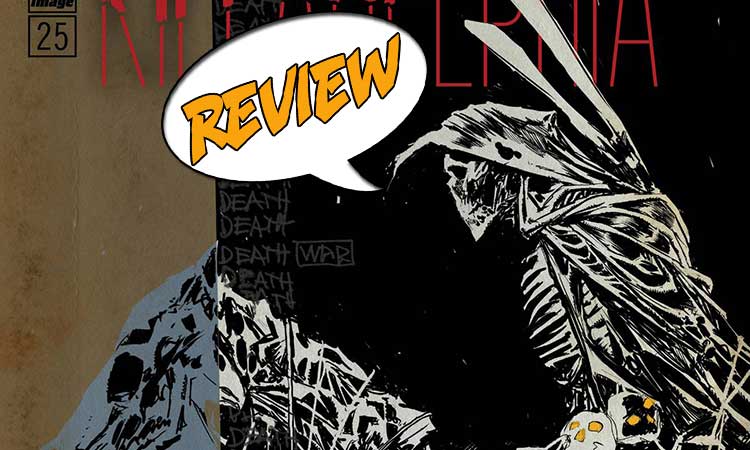 Vampyres fighting against humanity may be the spark that brings Armageddon to Earth. But if humanity dies, is there any remaining purpose for either the Dark Realm or the Light? Find out in Killadelphia #25 from Image Comics!

Previously in Killadelphia: Vampyres fight to take hold of the city. General Toussaint arrives with a small army to fight against them as a mercenary in a battle against the Dark Realm. SeeSaw ponders the desire for immortality and the irony of becoming a monster in order to attain it. He also remembers the life and the sudden, violent death of his father, which was an important turning point in his life. Above the slaughter in the streets, Sangster, the Adamses, Washington, Tituba, and the Lycans watch. The skirmish has become a war.

As Killadelphia #25 opens, Anansi finds Corson and talks to him. Corson has the war he was looking forward to, but he distrusts Anansi who is known as a trickster god. Anansi states simply that he wants to save the world. If humanity is wiped out, what will become of the Immortals? Who is a god with no worshippers, or a demon with no one to torment?

The focus shifts to James Sangster deep in the middle of all the fighting. He reflects on how he got here. I really like this break. This series has been running for some time and the conflict has escalated. It is nice to get a recap from his point of view now that we see where things have ended up. But perhaps Sangster is reflecting because he also sees that Toussaint and his people are terrifyingly good at killing Vampyres.

Anansi warns Corson that if the Dark Realm makes its move, it will provoke a response from the Light. Corson is surprised by Anansi’s concern. Armageddon has long been prophesied in many holy books. If it has always been inevitable, what is the concern? Anansi returns to the idea that if they do not have humans to inspire or to torment, will they have any purpose anymore? Immortals may be powerful, but perhaps humans are what give their existence meaning.

Jose and Jimmy remain inside, safe from the fighting. In a reflection of his father, Jimmy remembers the bitterness of his relationship with his father. It has taken his death to draw them closer together even while the vampirism pushes them apart. To have his father back as an undead has given them a second chance to patch things up, and Jimmy is terrified that he may lose his father again.

In battle, James’ memories turn to the city he knew. Even before this battle, Philadelphia was a hard place and getting harder. Desperation threatened hope, but still people had hope that their lives could get better.

I like Anansi’s argument and the point he makes about humans, but Corson has a counterargument which is surprising and compelling. Perhaps their purpose as Immortals is already gone. Corson does not need to torment humans; they torment themselves endlessly. And what purpose is there in a god who requires faith from their worshippers but does not deliver anything tangible in return? Is there any need for them to weep for humanity at all?

A couple new artists have joined the team for Killadelphia #25, and it is terrific that they understand the flavor of this book so well. The grittiness and drama shine through. Anansi and Corson are a cornerstone of the issue. Anansi still looks mostly human while Corson is more of a traditional demon, wings and horns and glowing eyes. They meet at an abandoned restaurant and sit at an outdoor picnic table. It emphasizes the feeling of “as above, so below” that runs through the story and is depicted so eloquently here.

I am fascinated by how we can keep seeing fights with Vampyres full of blood and gore, with dismembered body parts flying around, and yet each one has its own focus and emphasis. The fights are not about the fights as much as they are about the characters in them. We have not had a thoughtful moment with the elder Sangster for a while. He fights heroically, a reflection of his idea of himself as a police detective in the past even while he realizes that even Vampyres are not fully Immortal.

I love how Killadelphia #25 can be so dramatic and exciting all while being thought provoking. A good horror story often uses the fantastic as a stand-in for something from the mundane world. Killadelphia provides that in several layers. Reading it is an incredible experience.

Humanity fights for survival with some unexpected allies.