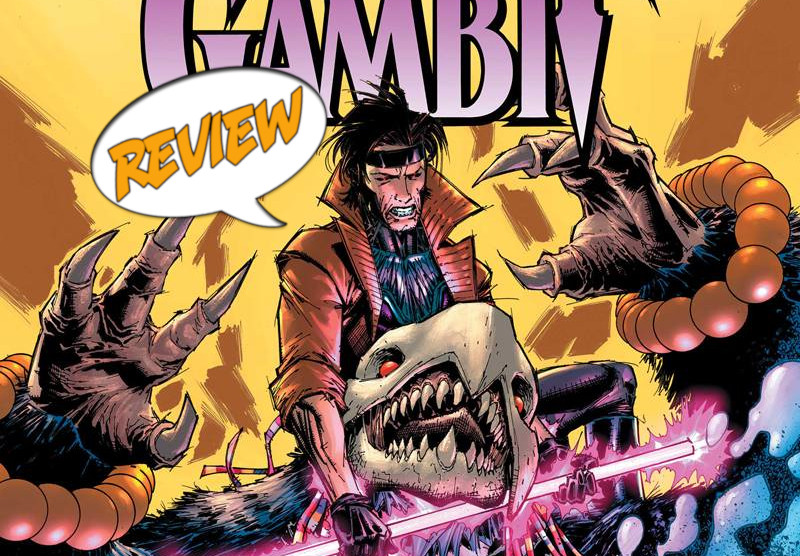 Gambit and ‘Ro had many adventures before Gambit joined the X-Men. However, can they save Marissa DeCastro from intergalactic bounty hunters? Find out in Gambit #5 by Marvel Comics!

Previously in Gambit: Gambit met a de-aged Storm and has taken her under his wing. While traveling, they saved Marissa and Gabriella DeCastro and butted heads with Dominic Solarz. They later head to a Lila Cheney concert, who is a singing sensation and an interstellar thief. Remy has taken it upon herself to fight off bounty hunters and even made a truce with Bounty. However, another set of bounty hunters has captured Marissa!

Gambit #5 starts with a crisis. Marissa is being absorbed into Bonehead and replaced with technology in real time. Gambit and his team prepare to fight. ‘Ro and Gabriella fight a hunter name Sunami. With the power of Ashaké, they defeat Sunami, and Gabriella absorbs her powers.

After the fight, Marissa is gravely injured. Lila Cheney suggests they go see a Doctor in space. Marissa and Gabriella prepare to leave, but Marissa tells Gambit to stay with ‘Ro. She is a child and needs a mentor.

Chris Claremont did a masterful job exploring Gambit’s backstory and the honor among thieves feel in Gambit #5. While this issue primarily featured action and the climax of the arc, I appreciated the small things in the resolution. Things like ‘Ro overhearing Gambit and Marissa talking about her and Gabriella proving a mother’s love is above all. The only concern I have is the interpretation of Bounty. I don’t know much about the character. Still, watching Bounty help Gambit seemed a little convenient, and she didn’t play a massive role in the final fight. Instead, it appeared that Bounty was there to set up a future potential storyline involving Marissa and Gabriella.

The art and colors were also exceptionally well done. I appreciated the use of ‘Ro on the skateboard in action scenes, and the character designs of these villains were engaging. But perhaps the standout image was when Marissa was getting her eye removed. Great work by the creative team.

BOTTOM LINE: A LOT OF LOVE

There are a lot of great things about Gambit #5. I’m impressed with the quality of the writing and the interpretation of the characters. A lot of thought and love went into this storyline, and it showed in the final product. On top of that, this is right up my alley and hits my nostalgia factor hard. Gambit #5 is a 4.5 out of 5 stars.

Gambit #5 had a lot of love and consideration for the title character and supporting cast.