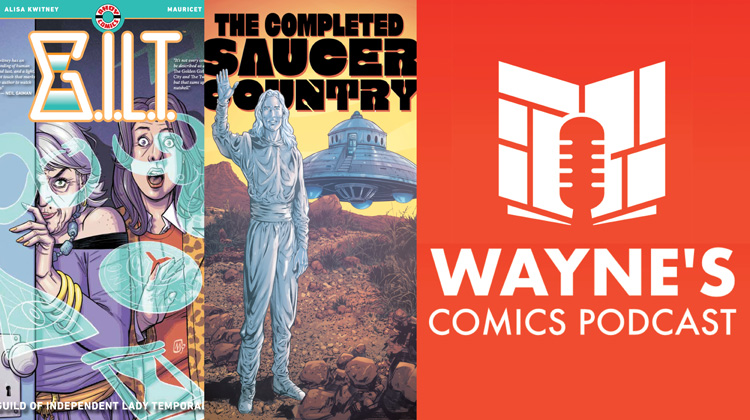 This week’s show, #563, is an excellent doubleheader episode, featuring interviews with Alisa Kwitney and Paul Cornell!

It all kicks off with Eisner-nominated writer Alisa Kwitney from the terrific Ahoy comic G.I.L.T., and her trade paperback of the first story has recently been released! It’s described as “a fusion of The Golden Girls, Sex and the City, and Twilight Zone starring unlikely time-travelers Hildy and Trista. Hildy has a big secret: Her Manhattan apartment comes with a time portal and membership in the Guild of Independent Lady Temporalists. Their prime directive: Do not alter the past without co-op board approval!” We explore this unique story, including the exceptional characters and what they’re up to! You won’t want to miss this fun conversation!

Then everything wraps up with the return of creator Paul Cornell, who has a Zoop.gg fundraising project underway for The Completed Saucer Country! This book he’s finished with artist Ryan Kelly is described this way: “Saucer Country is a dark thriller that blends UFO lore and alien abduction with political intrigue, all set in the hauntingly beautiful Southwest. Experience the full story of alien abductee Arcadia Alvarado’s campaign to be U.S. President… and her search for the truth of what happened to her, in the comic that suggested there was Russian intervention in U.S. politics way before it was cool!” It will conclude in early December, and Paul fills us in on what else he’s working on as well, so you’ll enjoy another great interview with this high-power comics creator!