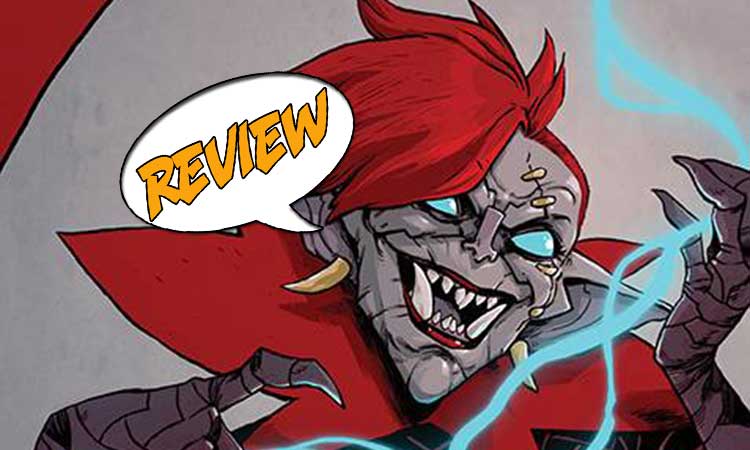 Wynd: The Throne in the Sky #4 Review

A surprise rescue saves the children from immediate danger, but also takes them off course in their journey. Will they be able to get back on track? And what of all the people who are trying to find them, for good or for ill? Find out in Wynd: The Throne in the Sky #4 from BOOM! Studios.

WYND: THE THRONE IN THE SKY #4

Previously in Wynd: The Throne in the Sky, Duke Yadriel makes connections in the prison camp with Oakley’s father, Roderick, and Thorn’s father, Ash. They may not agree with the duke, but they are interested in keeping their children safe, so they help him to escape. In the mountains, the children find some respite at a hot spring. Yorrik says something about Weirdbloods without thinking and then he realizes how many of his friends are not human. He wakes at night ruminating on how he wishes things could just go back to normal. Oakley finds him and they talk. She understands how people do not like change. General Eks reaches the cave they thought was a safe place. But then a giant arrives as well.

SAFE AT AN UNEXPECTED DESTINATION

Wynd #4 opens as the Giant walks away through the mountains with the children all gathered up in a glass jar. Merien has heard stories that they lived in the time of the Winged Ones. Wynd heard him say that two little birds told him where they were, and he wonders if they were the winged creatures he saw earlier. The Giant, Strawberry, takes them to a vast, abandoned city and empties them carefully into a tower as though he was putting bugs into a terrarium. This, he tells them, is the Old City. He has gotten the old thermal vents working as part of cleaning up the city. He tells them they can wait out the war safely here.

The duke’s party is deep in the mountains. Roderick and Ash discuss Weirdbloods, their loyalties, and their children. They care about their kids, but neither is completely in agreement with the duke. They come across the remains of General Eks’ party. He is not there, but neither are the kids.

Eks and his second-in-command are the only two survivors from his party. She regains consciousness to find him carrying her through the snow. He tells her he has heard reports of Giants. He thought they were only stories, but he remembers everything. He has also gotten reports that someone has been preserving entire buildings in the Old City, and his spies have seen traces of huge handprints. He thinks this will be a convenient place to have the children martyred.

Wynd awakens early. Merien is already awake, and she beckons him over. Outside their tower is a statue of a winged person who looks like Wynd does now. She reminds him that the Winged Ones once ruled over Esseriel. She begs him to convince the Giant that he is the last of the Winged Ones so he might help them to reach Northport. Wynd does not want to lie, but he does agree to do it. Strawberry surprises him. He already knows all the Winged Ones are long gone. And he tells Wynd a myth from Giant lore, a story of four brothers who were lonely and restless. They each chose a direction and wandered the world. They also stole magic, and when they found they continued to be alone, they created smaller creatures to inhabit the world. But these smaller people they created eventually went to war. The story is eloquently told and gives another layer to the mythology of this world.

But as the other children wait for Wynd to see if he can get them out, an unexpected guest drops in!

As Wynd #4 opens, Strawberry strides through the mountains. One of his features is his hat, which is big enough that it has a bunch of trees growing on it. I enjoy this touch in his design and it helps communicate just how big this world’s Giants are. He also appears to be wearing some kind of furry leggings, and one does not want to imagine what sort of creature is big enough to provide that fur! The kids are terrified when he drops them off and I like how he immediately talks to them, asking if they are all okay. Except in very long shots, we do not see much of him at a time until Wynd approaches him. I love how we see him carefully brushing debris away from buildings like an archeologist.

This is a story that periodically dives into history and mythology. Since it is at least a double-sized issue, we have the time for it. The art makes a subtle shift when we reach the tale about the Giants. Instead of being rectangular the panels are rounded and more organic in shape. The coloring makes a gradual shift from pleasant greens to more reds and yellows and the conflict increases.

Just when you thought you understood the world in Wynd #4, it opens further and changes our perspective yet again.

Wynd: The Throne in The Sky #4

Do the history and mythology of the world have a part to play in its future?