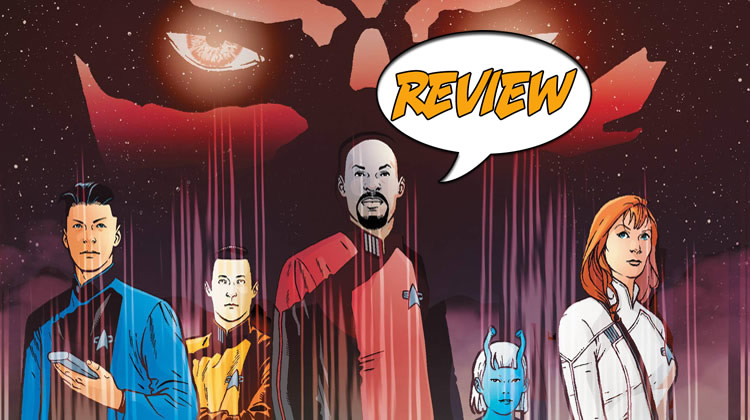 Captain Benjamin Sisko is back, and he’s chasing god killers with a crew with members from many versions of Trek in Star Trek #1 from IDW Publishing.

SOLICITATION: It’s Stardate 2378, and Benjamin Sisko has finally returned from the Bajoran Wormhole omnipotent. But his godhood is failing with every minute. Sent by the Prophets on a mission to the deepest parts of space aboard the U.S.S. Theseus, he witnesses the unthinkable: Someone is killing the gods. And only Sisko and his motley crew of Starfleet members from every era of Trek can stop them.

This comic worked for me, a long-time Star Trek: Deep Space Nine fan, on many levels. First, the opening sequence follows up perfectly from the final scene of the last episode of the show. Then, Sisko is back, and he’s with his son Jake!

Sisko then approaches Captain Picard (reminiscent of the very first DS9 episode) to get the ship he needs to carry out the mission given him by the Prophets. Picard assigns Data to Sisko’s crew as first officer.

We see members of other Trek crews on the ship, including Dr. Beverly Crusher from the Enterprise, Scotty from the original crew, Tom Paris from Voyager, Andorian Ensign Sato, and Vulcan Ensign T’Lir on the U.S.S. Theseus.

Of course, Trek fans like me probably recognized this format from a proposed motion picture idea that never came to pass, and it was to have members of several incarnations involved on a mission something like this one. It’s actually fun to see all these different characters interact as they try to resolve an interesting situation. Trek has always had a problem with “gods” or “god-like” people. They either were frauds or something close to that even if they believed their own higher-than-human status. To see many of these characters in trouble—well, that’s something I’m going to be fascinated to see this crisis eventually resolve. Will they be gone or will they return to their former status?

One of the great things that goes on in this issue are the references to related characters. For example, Paris notes that his wife would like to be with him on this mission when he says, “B’Elanna is going to be so jealous.” Also, Data deactivates his emotion chip just before the ship runs into big trouble, a reference to the TNG films.

If you aren’t a big Trek fan, you probably don’t find these fun diversions all that important. But those of us who have watched the franchise regularly and know a lot about these characters will enjoy that kind of quick diversion.

Also, Trek fans will enjoy the new uniforms and the return of the Theseus. The color schemes remain the same, but the design is something new. I look forward to seeing cosplayers wearing these outfits at upcoming Trek and comic-cons.

Of course, what’s important when art tries to imitate real people are the resemblances—are they accurate? I have to say that they are excellent! Very likely, photo references were provided to make sure people looked they way they should!

How are the action and dramatic sequences? Very much like the franchise would provide on the small screen. When the ship faces the Crystalline Entity, that reminded me very much of the more cinematic approach that Discovery uses these days. Very nicely done!

BOTTOM LINE: Where No Sisko Has Gone Before!’

Fans of DS9 were treated to a lot of happenings that could very easily have taken place on that series. Sisko does everything the “Wormhole Aliens” want him to, but does everything work out as expected? Of course not! Then, too, the reunion of Sisko and his son was the touching one many of us who watched the show would have liked, so that worked out well!

Sisko is slowly returning to his human state, and that’s causing some problems for him. I don’t know where we go from here, but I’ll be back next issue to find out, you can bet on that! Highly recommended!

IDW already considers this a success! In fact, a spin-off is already announced featuring more Trek characters, this time on the U.S.S. Defiant. Can’t wait!

This comic worked for me, a long-time Star Trek: Deep Space Nine fan, on many levels.