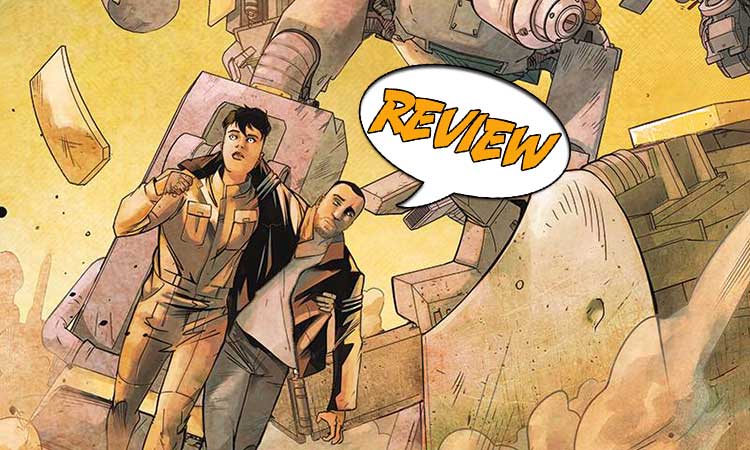 Kit’s battle against kaiju becomes a personal battle against another Titan, remotely controlled by her Uncle Orlando! Orlando wants to destroy the Hobbs family’s Titan. Can he be stopped? Find out in We Ride Titans #5 from Vault Comics!

Previously in We Ride Titans: Kit and her father form enough of a truce that they can work together when Kit operates the family Titan. As the days pass and she fights kaiju, Dej texts her, not getting a response. He checks himself into a psychiatric hospital. Kit finally goes to see him, and they have a talk. He shares with her that this is where he needs to be. He does not blame her for not doing more as a sister. It also comes out that other people in their family have had problems over the years. A kaiju attacks, and Kit must go, but the other Titan also arrives. Kit takes it on, relying on information from her father to help. But he stops responding.

We Ride Titans #5 opens with Kit battling the other Titan, and we see what she does not yet know. Dwayne is being held at gunpoint by his brother, Orlando, who built the unfamiliar Titan and who pilots it remotely. He demands to talk to Kit. He sort of apologizes to her, but she is in his way. He was supposed to be the family Titan rider and he bears a grudge. Dwayne reminds him that he was a mess.

In Orlando’s eyes, Dwayne could not wait to take over his job. The family took everything from him and abandoned him. Dwayne remembers waiting to drive him for the clinic, but Orlando never showed up. Orlando felt like the family thought he was a liability, but ever since he left, they have all screwed up. Dwayne was injured. Dej took over before he was ready to. Now it is Kit. Orlando wants to destroy their Titan and perhaps take them out too. The family issues run deeper than we knew.

Kit is confident that she can take him on, and she draws his Titan back into the fight. Orlando acknowledges that she is surprisingly good, but he still does not believe she is a match for him. Kit apologizes to her father for the damage she might be about to cause to their Titan. She disrupts Orlando’s Titan. This distracts him enough that Dwayne can jump him.

Time passes. Family is still family, and it is important. The Hobbs change the way they run things. They use Orlando’s remote piloting technology. They bring in specialists from outside the family. Dej gets out of the hospital and gets his first apartment and Kit helps him move in. On her way out of town, she stops at the psychiatric hospital to see Orlando, but visiting hours are over. She returns to her own home and Jen. It has been a rough road, but they are all making steps to try to change things.

IT’S IN THE DETAILS

One of the things I like about the art of We Ride Titans #5 is the precise linework. It allows for a lot of detail in the Titans to show where they are articulated or reinforced. When Orlando and Kit face off, we see the similarities and differences, which supports the idea that Orlando’s new design still had some basis on the old Titan he was familiar with. It keeps the fight interesting because we can see where parts may break loose from the large mechs. The linework also allows for backgrounds that appear relevant during the fight, such as buildings with cracked windows.

But this issue is not all about the big fight. As wonderful as those scenes are, the heart of the story is at the personal level. Orlando has a lot of anger, but we also see a lot of pain. Even when he is threatened, Dwayne stands up to his brother and we get a sense of their longstanding conflict. But the most moving scene is after Orlando’s Titan is brought down. Fury takes him over until he sees Dwayne’s wife, who picked up the gun he dropped and is holding it on him with a look of horror. Orlando realizes how far he has taken things and collapses.

We Ride Titans #5 takes the action of a kaiju fighting story and balances it against the very real drama of a family with a lot of stress and resultant issues. I like the way it plays out as being hopeful and cautiously optimistic and that everyone needs to make some allowances for the others to have room to grow.

Kit learns that the rogue Titan is piloted by her estranged uncle who has an axe to grind!