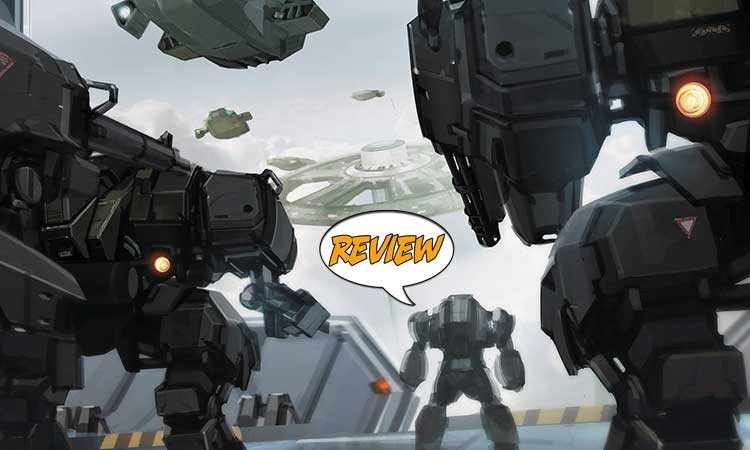 Lela leads her impromptu army of Ironclads into the Citadel to find Peris as battle rages between the Armorclads, Legionnaires, and bugs! Will they be able to get back out alive? Find out in Armorclads #5 from Valiant Entertainment

Previously in Armorclads: Peris has been taken to the Citadel, where Governor Domahn claims he may be the only person who can operate a rare, antique device that might be able to change the lives of everyone drastically. Determined to rescue Peris, Lela becomes the impromptu leader of the Ironclads. Her crew alters the mining Ironclads, so they have weaponry. But as they march toward the Citadel, the Citadel is attacked by another group – the Legionnaires!

Reinforcements arrive at the Citadel as Armorclads #5 opens, but before they can land, the Legionnaires unleash their secret weapon. The tether collapses and the ship starts to descend, uncontrolled. On the ground, the Legionnaires have also brought in an army of the local bug-like aliens. Their aim is to take out the Governor.

Trapped in Domahn’s lab, Peris tries to get out with no success. Finally, he turns to the weapon he is supposed to be able to operate. It does nothing. Then the doors buckle as an explosion blasts them inward. When the dust clears, Lela is there with a small contingent of Ironclads. They are there to get Peris out. They do not have a spare Ironclad for him but will keep him protected. He insists that they should bring the weapon as well. He may not know what it can do, but he feels it is important.

On the surface, Domahn is in his Destroyer and is surrounded by bugs. The falling ship warns that a crash is imminent. The Ironclads reach the surface and realize they need to evacuate immediately. But first they need to fight their way through the bugs. Peris recognizes Domahn’s Destroyer and asks Cole to point the ancient weapon toward the attackers. He wants to save Domahn because he is sure he has more information. The weapon fires an enormous blast.

The bugs start to flee, and Lela recognizes that they are aware of the impending impact. Peris looks at the falling ship and asks Cole to reposition the weapon. In a truly cinematic moment, he fires off the weapon cleaving the ship in half and causing it to break up further, saving the Armorclads. Peris pulls the Governor out of the wreckage of his Destroyer. Domahn tells him he must restore the flame as he passes away.

It may be a powerful weapon, but what Peris takes away from this experience is that that is not what has the power to change things. The fact that the Ironclads can come together and fight for something beyond themselves is more powerful. He wants to use the weapon only to liberate people. He also acknowledges Lela, who brought everyone together, as their leader.

It is a tidy close to a story with a limited arc. While it feels abrupt in some ways, it does manage to tie up loose ends and give us a sense of where the Ironclads may go next. There is an epilogue which sets up a possibility, as well as connecting this book to another part of the greater Valiant universe, which is exciting.

THE CHAOS OF WAR

Armorclads #5 is primarily a big, climactic battle. There is a lot going on in several places. The art does a good job of leading us along the path the Ironclads take whether it is in the lab below the planet’s surface or in the main battle and in the potential impact crater. That said, the battle is complicated and has a lot of elements and it can be a little difficult to figure out who everyone is and what their goals are.

What are executed particularly well, though, are several key panels illustrating significant points in the fight. Some of the connections between these moments feel weaker, but the story hinges on the main points. Lela’s arrival with her small contingent is one of those dramatic moments. Later, during the main battle, we also see a wonderful shot showing just how big the Ironclad army is, and it is considerable. And Peris’s take out of the dropship is wonderfully dramatic.

BOTTOM LINE: AN INTERESTING CORNER OF THE UNIVERSE

Armorclads #5 is a solid ending of the story arc. Overall, while there are times when the story drags because there is so much world-building information, it is a satisfying read and I like that it has a strong sense of hope.

Multiple conflicts converge on the Citadel!