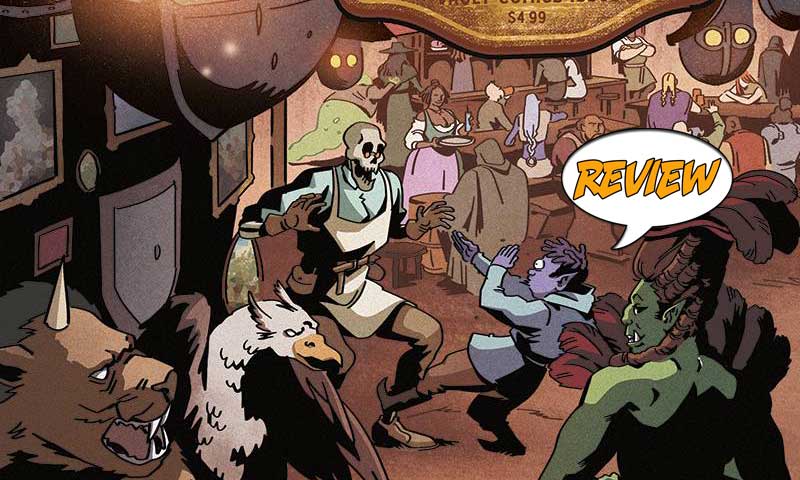 As adventurers visit before and after their quests, Barrow considers his current life. Why is everyone so interested in his tavern and what can he do about it? Find out in Quests Aside #2  from Vault Comics!

Previously in Quests Aside: Barrow is a legendary former adventurer, now owner of a popular tavern where his employees are always ready to serve a drink or give customers information on a side quest. His employees are an esoteric bunch. Zuzanna, one of his servers, is in a relationship with Ray, a cook who happens to be a skeleton. Barrow must deal with a racketeer, then a competitor who wants to buy his place. Then the King drops in for a visit and a chat, as it turns out he is an old adventuring buddy of Barrow’s. And he tells Barrow he wants to buy out his building so he can put up barracks.

Quests Aside #2 opens with Boon putting together an adventuring party. Barrow gives him a letter to deliver to the King. Boon does not want to until Barrow rephrases this into a sort of quest. One by one, Barrow’s employees have issues. Jodan wants the night off for a meeting. Ray is quitting – again – this time because they don’t have enough food for him to work with.

Barrow spots a group of adventurers there for drinks and, as it happens, sharing stories, some about Barrow. Krayn and Peryl share more stories about the old days, with some corrections by Barrow, and ultimately come around to trying to talk Barrow out of retirement. Owning a bar is no life; it must be regret!

Mira drops in. She is not there to make another offer for the place. Instead, she has figured out that the King is trying to force Barrow out and she asks him what he is going to do. Barrow really does not know yet. But she brings him some supplies to help tide him over. I like this complexity in her character.

Zuzanna tells Barrow that the people he invited over for his meeting have arrived. She also wants to talk to him. She is having some trouble with Ray. But Barrow does not think he has the time right now to listen to her problems. I like all of this random activity and how it helps fill us in on how Barrow is really trying to make a go of it in a post-adventurer life, and how so many of the little problems his people have sound so ordinary and familiar.

The scene shifts to his meeting – Adventurers Anonymous. There are a couple pages of the participants sharing their stories, and it is a terrific mix of poignant and goofy. Barrow hears them out and shares his own story. He was an incredible adventurer. Is opening up a bar the biggest mistake he ever made? Or has he created something here that he did not even know he had been missing in his life? But why is the King, his former friend, trying to take this all away from him?

CAPTURING THE MOOD AND MOMENT

Quests Aside #2 features a truly motley variety of adventurers in the background of its pages. The art breathes life into the tavern, and it is a fascinating mix of over-the-top stereotypical adventurer tavern and sensitive, thoughtful problems that feel down-to-earth. The art supports this well. The adventuring party that stops by could have stepped out of a fantasy game and their expressions are dramatic. The following scene is Barrow alone with Mira. They may be competitors, but theirs is not a comedic relationship. They are compatriots in a way, and it gives us the sense that Barrow’s problems are more serious than the average side quest for hunting rare mushrooms.

And I love the Adventurers Anonymous scene. It’s in a storage room, so there is some extra stuff around. Everyone has their chairs arranged in a democratic circle. There is even a side table of snacks. Again, we have a new variety of ex-adventurers and every one of them has a story that is not what we expect. The dialogue can be so funny, and their expressions are so serious that I really feel for them.

BOTTOM LINE: CAN AN ADVENTURER’S LIFE EVER BE QUIET?

Quests Aside #2 continues to defy expectations and take fantasy tropes in directions we were not expecting. I like that we’re settling in on the questions of “Why did Barrow quit?” and “Why does the King really want Barrow’s tavern?” With just the right touch of melodrama, it is an engaging read.

As everyone seems to want to buy his Tavern, Barrow wonders if he made the right decision when he gave up adventuring.