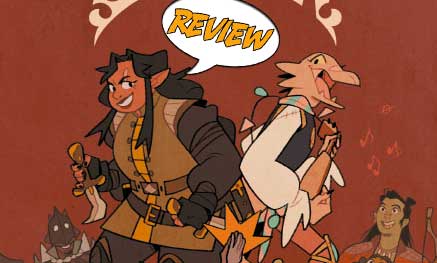 The party split up and without Kezz, they were caught by the lich and cursed. Can they break the curse? Can they make it up to Kezz? Can she help them out of their predicament? Find out in The Last Session #5 from Mad Cave Studios!

Previously in The Last Session: The players split the party and left Cass’ character, Kezz, behind. Cass tells the others to play on without her and leaves to pick up pizza. Lana accuses Jay of playing favorites with Cass and her character, and he asks his other friends if any of them read any of the notes he gave them about the game. They have not, and he lets them play on without Cass. They make their way to the throne room and find not the necromancer they were expecting, but a lich – a lich who has been trying to keep the local lord from accumulating Magestone and potentially becoming an even worse evil overlord!

THE GAME COMES TO A CLOSE

The Last Session #5 opens with a flashback of Jay and Cass on a video call. Cass wants to hear all about his latest game. He is at home, where his grandmother wants to make sure he isn’t involved in any “devil games.” Cass has never played a game, but she is super-excited to join the campaign, and has more character concepts than she knows what to do with.

Flash forward to the present and Cass returns to the apartment with the pizza and tries to put on a brave face. She wanted to love this game so much and has been kicked out. Instead, the other players apologize to her for taking out their own issues on her. Even Lana admits she has been kind of a jerk and asks her to rejoin the game. Cass forgives her, and with a little pizza, everyone relaxes and gets ready to continue playing.

In the game, Kezz, who was left behind, chats with a skeleton until the rest of the party arrives. They think she’s being attacked, but she has learned the skeletons are pretty chill unless they’re attacked first. She asks about their big fight. They confess to losing against the lich, and Lana’s character is cursed. She will die unless the party can defeat Lord Avalon. They ask Kezz to help come up with a plan.

The party arrives back at the castle, announcing that they have defeated the lich, completed the quest, and are here for their reward. They are allowed in to see Avalon and claim they have the lich’s phylactery. They just want to be paid first. He gets the money, and they hand over a chest. Avalon opens it, and a construct works its way out. Then they confront him about his evil plot and tell him how they have broken his hold on the constructs. He claims to be wearing enough Magestone to defeat them all and attempts to regain control of the construct.

But it was an illusion. It is not really a construct; it is Kezz in disguise and with a scroll that magically recorded his confession. Avalon prepares for a big fight – but a well-timed intimidation roll saves the day. The campaign is over; the players have won; the lich removes his curse and invites them to stop by for a visit any time. The players have a nice bit of closure and there is a charming epilogue.

I like the way The Last Session #5 saves Cass’ story to present here. We are reminded of the enthusiasm and excitement she had for the game that we saw in the first issue. In the art, we can see that in her face as well as her longing to be a part of it. Then we see her in the present as she pauses outside the door the collect herself and tries to put on as happy a face as she can muster. I really do love that all the other players are big enough to apologize and try again.

The game scenes have a lot of humor. As Kezz talks about being abandoned by the rest of the party, the skeleton sits by her, dutifully jotting down notes with a quill pen as though it is her therapist which is delightful. Lord Avalon is as smarmy as we would hope, what with trying to become an evil overlord. I love the huge construct pulling its way out of a box that is way too small for it. Details like this capture the goofy fun which is so often a part of role-playing games.

In The Last Session #5, everything works out fine, which is what I was expecting. But I think this is a story that is more about the character growth everyone goes through. The main thing is that the book ends on a positive note, and sometimes that optimism is very welcome.

8.0 Ends on a Positive Note

It’s not just about the game, it’s about major transitions in life.