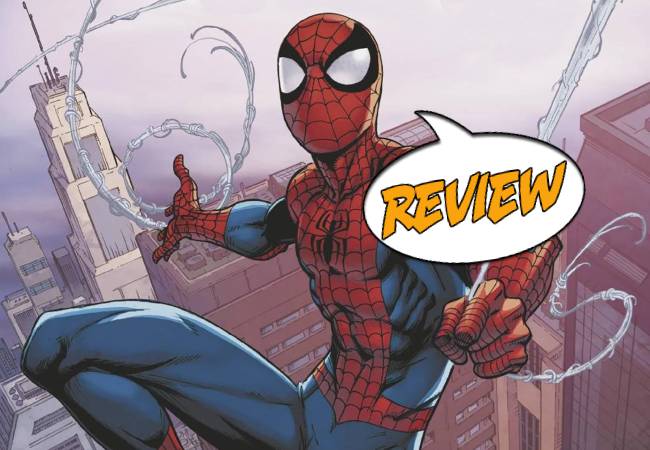 How low can the Wall-Crawler fall? Looks like we’re about to find out. Your Major Spoilers review of Amazing Spider-Man #1 from Marvel Comics awaits!

The first page of this SIXTH volume of Amazing Spider-Man opens with a crater. In its center is Spider-Man, costume tattered, clutching some sort of gadget to his chest… and screaming. Is it pain? Terror? Distress? We don’t know, and the issue immediately jumps six months into the future, where Peter Parker tries to explain to Aunt May why the past few months have been so difficult, including seemingly causing her to lose her home. She warns Peter to stop immediately, as she can’t bear to have him lie to her. On his way home, he has to dodge creditors, Randy Robinson (his former roommate, who apparently paid his rent while he was gone), and all manner of responsibility. Elsewhere in the city, Tombstone and the united gang lords (Black Mariah, Crimemaster, Diamondback, Hammerhead, Mr. Negative, Madame Masque, and The Owl) are voting whether to let The Rose join their coalition, now that the Kingpin of Crime has once again been deposed. Tombstone votes no, The Rose blows up Tombstone’s house. Quid pro quo for the gangsters of the world, but it leaves Tombstone in a very unique position, offering to show Spider-Man how the world REALLY works.

The whole Beyond arc of Spider-Man was quite interesting, ending with the big cliffhanger in Amazing Spider-Man Vol. 5 #93 a couple of weeks ago. That’s why this issue’s opening is so disorienting for me, throwing those questions aside to… raise a bunch more questions? The last two or three Spider-arcs have also begun like this, with a lot of unexpected changes that then have to be explained and unraveled throughout the story, so it’s not unprecedented, but it’s very difficult to get into. The interactions with Aunt May and the Human Torch make it clear that Peter has made some very bad decisions since the death of his clone-brother, but the details are sparse. He’s stretched all his friendships to the limit, which has made things awkward with Randy (who is about to ask Tombstone for his daughter’s hand in marriage?) As for the art side, John Romita does a really fun Spider-Man, with some well-designed action sequences, but certain pages feel very sketchy and unfinished. I couldn’t recognize half of the assembled crime-villains, including Madame Masque and Mister Negative, whose faces are gold and blue/white, respectively. The layouts are strong, though, and unlike most comic artists, he can draw Mary Jane’s two children in a way that looks like human children.

BOTTOM LINE: THEY HAVE MY ATTENTION

But wait, when did Mary Jane get kids? Weren’t she and Pete going to move in together? What happened with that explosion? Where’s Ben Reilly, who was suddenly a creepy green-and-purple villain at the end of the last issue? And what about the glowing guy outside Mary Jane’s window? These questions and more are… not even addressed in these pages. With the art ranging from excellent to occasionally seeming unfinished and the story doing backflips to avoid giving us any real information about what’s happening, Amazing Spider-Man #1 is clearly meant to be the tease that pulls you in for the next however-many-issues to get the answers, stacking up to 3.5 out of 5 stars overall. The answer to that question will depend on how you feel about Romita’s stylized art (I like it), the high price point of six dollars for 48 pages (I dislike it), and whether you can keep up with the high-velocity pace of Spider-titles.

Given that the previous volume of Amazing Spider-Man put out nearly 100 issues in the space of 4 1/2 years, that last one might be the most important consideration.

The previous issue ended on TWO big cliffhangers, which this one just leap-frogs and launches into a well-drawn, but hard-to-parse new chapter.