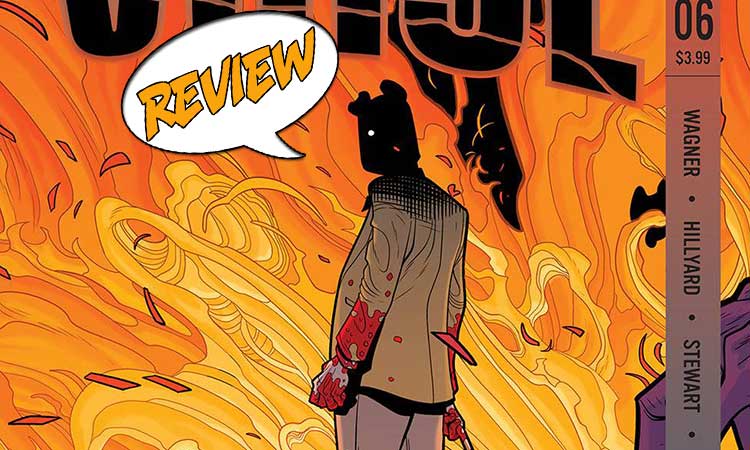 All the bloodshed, all the murder, all the music, it all comes down to this as Walter’s hunt nears its end.  Your Major Spoilers review of Vinyl #6 from Image Comics, awaits!

Previously in Vinyl: Walter has hacked and slashed his way through the Sunflower Bunker, in an attempt to rescue the FBI agent trying to imprison him, who’s also his only friend.  Now only a few left standing in his way.

Vinyl #6 opens with Walter taking a walk through the bunker, examining the aftermath of the events of the last five issues.  He encounters the last of Madeleine’s forces, a trio of husks,  before encountering the leader herself.  The two square off and fight, during which Madeleine tries to explain to Walter that Dennis is not a good person, and that by sending her son to prison, he condemned him to death.  Walter is undeterred by this and continues to fight her until flames surround them and the final blows are dealt.  Things then move ahead in time and we see Dennis, back at work. He receives a key and an address.  It turns out to be a storage locker full of albums that are tied to various murders and missing persons cases that will guarantee that Dennis will be well recognized for his police work.  Elsewhere a woman interviews for a spot in the fashion industry and a man is enjoying music on a bus.

A BLOODY RACE TO THE END

The finale to Vinyl checks off all the boxes on the list of things that made this series enjoyable, except one.  This has blood, it’s shockingly violent, while not being overly grotesque,  they keep the music element upfront, and the main character remains likeable even while being the perpetrator of horrible things.  What seems to be lacking here is the heart.  Throughout this series, there’s been an underlying tone of, for lack of a better word, wholesomeness.  It’s clear that all these characters, even the bloodthirsty murderers, cared for each other in their own unique way.  This issue though, there isn’t a lot of opportunity for this sort of interaction.  We get a bit of it from Madeleine as she speaks about her husks, but that’s it.  There’s actually a distinct lack of personality in general here.   There’s a lot of filler panels here that don’t really add anything to the story or are particularly interesting to look at.  The entire ending is wrapped up with a one sided narration via letter and Dennis doesn’t speak at all.  It’s as if there was just a bit too much story left to wrap things up in five installments, but not enough to make six.  Of course, like any good comic book series these days, there are openings for a sequel series or continuation.

THE BOTTOM LINE:  MORE OF AN EPILOGUE THAN A CONCLUSION

Vinyl #6 has the unfortunate job of not only wrapping up the series, but also following up on the characters.  The main story wraps up neatly with plenty of blood and action, but then an extended and awkward sequence follows that lacks any of the characteristics that have made the series fun.  3 out of 5 stars.

Vinyl #6 doesn’t quite stick the landing. It has a decent run up to the climactic showdown and a good fight sequence there, but the pages that follow are lifeless and meandering.