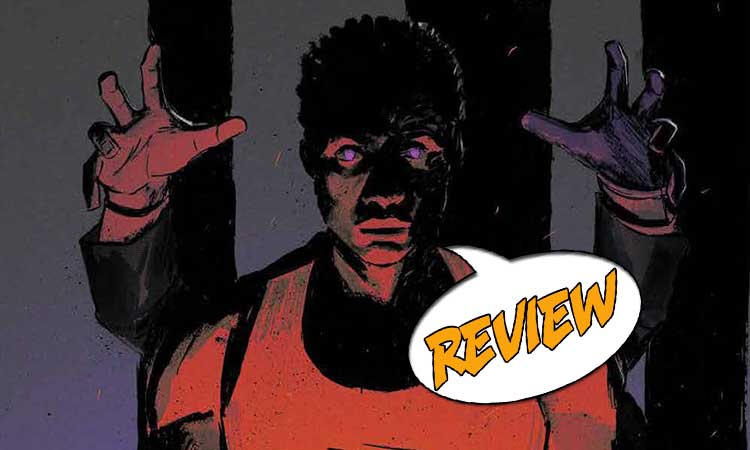 Previously in House of Slaughter: Aaron Slaughter is a hunter even though he has a streak of kindness. His story is also an examination of his past. As one of few young Black Masks, he is tormented by White Masks, especially when he almost bests them in a training exercise. Jessica tries to give him some encouragement afterward, but she has other news. He is getting a roommate, Jace, a White Mask transferring from the Maison de Boucher in New Orleans, another branch of the Order. Aaron shows Jace around, and Jace insists on sneaking up to where they might see the Dragon.

THE BURNING FLAME OF MEMORY

House of Slaughter #2 opens with Jace out in the woods roasting a fish over a fire. Aaron, a fully-fledged Black Mask, shows up with a sword. Jace is on the run and Aaron was sent after him. This is a story that roams through Aaron’s memory, so time is loose. At the time of this encounter, they had not seen each other for years.

Aaron remembers an incident in the past. He woke from a nightmare of when his parents died. When he awakens, he hears Jace talking in his sleep, and something in his bag seems to be talking back to him. Of course, this is Jace’s totem, and he gets cross at Aaron for messing with his stuff. The next day, Aaron apologizes and offers to make friends. Cecilia and a few White Masks come upon them, and Jace rejects the offer.

The memories in this story serve the additional purpose of filling in more background for the Order, such as Jessica working with Aaron and Erica on controlling their emotions. They work on a meditative exercise that involves calling out their monsters, but also ignoring them and finding a place of nothingness where they can maintain their balance.

At the ceremony, Jace is ordered to untether his monster. He does do. If he can survive and retether it, he will be accepted into the House of Slaughter. He attacks his monster, and it appears that he is successful. But after this night, he continues to have nightmares, and this is the start of a closer relationship between him and Aaron.

THE ISOLATION OF ADOLESCENCE

The world of House of Slaughter #2 is unforgiving, and the art captures that feeling of isolation and conflict. Shadows are strong and dark, even in daylight. The only brightness we see is during the meditation scene, and during Jace’s untethering, where he has a disquieting moment where he can see everyone’s totems and monsters, and they are all saying, “Dead.” This darkness also serves to highlight the unearthly colored eyes the members of the Order all have.

We get hints again of the trauma these young people have been through in order to summon and trap their monsters, as well as the ongoing, private, dealings with them. Having favorite childhood stuffed animals as the totems to capture these monsters has always been interesting; here there is something even more sinister about having a favorite childhood companion turning into not a protective guardian, but one who would be perfectly happy to see its owner dead.

BOTTOM LINE: A DARK LOOK AT THE INNER WORKINGS OF THE ORDER

In House of Slaughter #2, adolescence can be a lonely time, and even lonelier when you’re kept in isolation from the rest of the world.

Aaron recalls the first man he ever loved – and how he had to kill him.