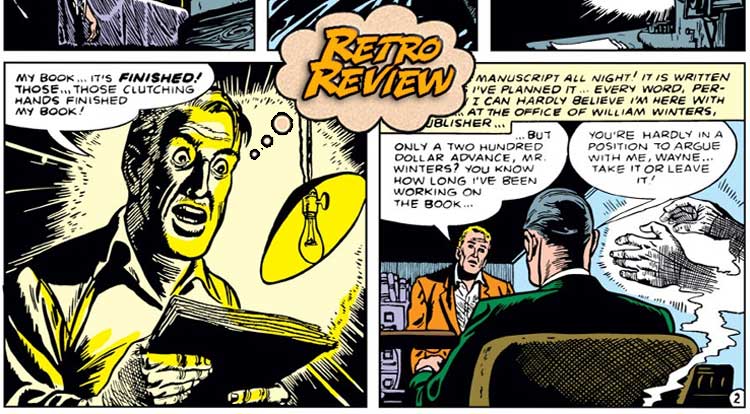 For our spooooky holiday Retro Review, see how ’50s Marvel responded to the EC revolution!  Your Major Spoilers (Retro) Review of Journey Into Mystery #1 awaits! Previously in Journey Into Mystery: Best remembered these days as the magazine that gave us Thor and Loki, Journey Into Mystery was once a full-on horror magazine.  Though the concept of horror comics is as old as comic books themselves (indeed, Siegel and Shuster created horror tales starring Doctor Occult before creating the Man of Steel), the twilight of super-hero comics at the end of the 1940s opened the doors for other genres.  EC Comics’ line of horror books (Tales From The Crypt, Vault of Horror, Crypt of Terror, et al.) hit it big in the early 1950s, and if there’s one thing that Atlas/Red Circle/Marvel publisher Martin Goodman knew, it was how to capitalize on what works.

Our first tale, kiddies, asks an important question: What good are riches to a man who has… ONE FOOT IN THE GRAVE? It’s the tale of Tony, a florist who greedily pays men to steal flowers from the graves of the newly buried, then resells them at a profit.  it’s a questionable business practice, made even more so when a suspiciously pale man comes to buy several of his best arrangements without paying.  When he chases after him, his greed is his downfall, as he is frightened to death that the dead have returned to take what’s theirs.  it’s… okay, I guess?  The Crypt-Keeper probably wouldn’t have bothered with it, and the art (by future Joe Palooka artist Tony DiPreta) is just okay.

Our second poison bon-bon is called The Clutching Hands, detailing the life of writer Ted Wayne, who murdered another author and stole his work, only to find a pair of ghostly hands completing the work as he watched.  Then, they get even more creative, strangling his editor, forging a confession and sending him to the gallows. That one’s more than  a little underwhelming, and that second-to-last panel purporting to be a ghost doesn’t really seem like a journey into mystery as much as it does a Polaroid in a dark room.  This story is the only one in the issue with a credited writer, Carl Wessler, who also worked for EC during this time period, and it’s not his best work.  (Check out Tales from the Crypt #45 if you don’t believe me.)

Our third story takes place in an abandoned house, as a mysterious figure slips in to find a place to hide, only for a young couple to show up interested in buying the old wreck. I’m not really sure I get this one.  It feels like the ending is supposed to be a surprise (it’s not a criminal, it’s a G-G-G-GHOST!) but it doesn’t work because the beginning of the story doesn’t feel like a mystery?  I dunno.  Still, it’s War and Peace compared to the next story, the tale of Frankie Arno, who pays a creep to steal a body that looks just like him, then double-crosses him and somehow steals the corpse’s identity, I think? It’s the kind of story that doesn’t really work out of its era, and probably only landed there for people who enjoy cruel Outer Limits endings.

Oh, and speaking of cruel endings, our final story gives one to a crook and murderer named Bronson, who uses a diving suit to steal a sunken treasure, and walk away unscathed, only to wander into a hidden aboriginal tribe… where he is mistaken for Iron-Head, one of their gods. It’s a really unpleasant story, and the depiction of the natives is pretty racist and messed up as well.  All in all, Journey Into Mystery #1 isn’t a particularly scary comics, not is it a very good one, but if you had 10 cents burning a hole in your pocket at the end of the Truman administration, it might kill half an hour on a Saturday afternoon, earning 1.5 out of 5 stars overall.  It’s clear that Atlas was only interested in the surface of the horror books of the period, and not the underlying craft that made the best of them memorable.

The collection of four and five-page suspense/horror tales runs the gamut from trite to incoherent, with okay art (and a really nice cover by Russ Heath) as its only real selling points. It's a pale imitation of the EC oeuvre.