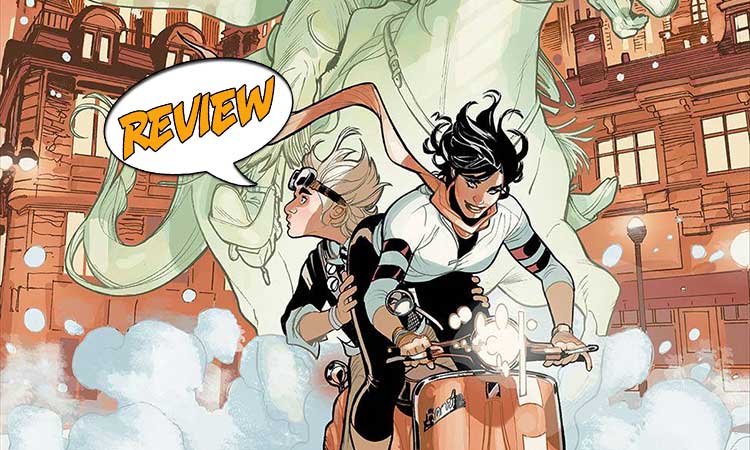 Baroness Bizarre has been banished! But are there more ramifications of Claire Connell taking up the mantle of Adventureman? Find out in Adventureman #6 from Image Comics!

Previously in Adventureman: Claire Connell has taken on the role of Adventureman! She meets Gentleman Jim, a hero from the past, just in time to learn that Baroness Bizarre is poised to take over Earth! Jim has a spell that could capture her, but he needs Claire’s help to keep the Baroness distracted. We also learn that Jim imprisoned Phaedra Phantom to save her from being forgotten like the rest of the past heroes. She kept their memories alive in books, and that is what made Claire’s new life possible. The Baroness summons Abbathexiddion, but Phaedra arrives and offers her protection. The Baroness is banished; Phaedra and Jim fade out; and Claire’s astonished family reach the upper floor of the Adventureman headquarters.

A SNOWFALL IN NEW YORK

Adventureman #6 opens on Christmas Eve in New York in the 1930’s or 1940’s, judging by the cars and the gangsters who are being chased by a masked gunman on a horse. We shortly learn that he is the Crossdraw Kid. The Adventureman of the time meets up with him and helps. This may have been a chance meeting, but it is also from a past everyone has forgotten.

The scene changes to the present, also a snowy night in New York. A Black man, the driver of a horse carriage, revels in the delight and surprises of the city in the snow. His horse spooks at something, unusual for the placid animal.

Claire awakens to find her entire family around her. She has been sleeping for three days and now she is ravenous. Tommy looks through his Adventureman books to see if they have any information about this. Before he can get some breakfast, Claire eats it all.

Later that morning she goes to her mother’s old shop with a couple of her sisters. They have just bought an estate collection and need to move a lot of boxes. With her super strength, Claire is happy to help unload the truck.

One sister, Reggie, ducks out of this job. She volunteers at a nursing home, and things are getting crazy there. Strangely, it seems that many of the older people with a cognitive decline are now waking up, becoming alert, remembering more things. And old man asks Reggie if she can dial a phone number for him.

Done with her heavy lifting, Claire heads to Tommy’s school and catches some of the rehearsal for “A Christmas Carol.” When she walks home with him, he is full of questions. How does the Adventureman serum work? Does it wear off? What powers does she have now? He spent much of the day devising tests for her in the best tradition of a superhero’s sidekick.

In the subway, Claire’s scarf blows off in an uncanny breeze. This is no mere wind; it appears to be ghosts. Adventureman goes into action. She goes after them, but instead they turn back on her, throw her up against the ceiling, and let her fall. Then they grab Tommy. After the train arrives, they vanish as quickly as they appeared. But this may only be the start of more odd occurrences…

The art of Adventureman #6 is lovely. Instantly, we recognize that we are in the past as every detail shows that to us as well as the limited color palette. It may be night, but this also brings to mind movies from the time period. The transition from past to present is clever and seamless; in fact, it took me a panel or two to register the switch. The palette continues to be blue, but it is subtly brighter. And I must say that the horses we see look amazing.

I love that we get Claire’s family again, although I am the first to admit that I cannot remember their names off the top of my head. It doesn’t matter. This is a lively family and even through a short breakfast scene, they are so individually dynamic that their personalities shine through. There is a lot of humor to be had in Tommy and his enthusiasm for his mother and her new powers. He is a smart kid, but he acts like a kid and his joy is infectious.

The world of Adventureman #6 is big and vivid. I like the way it is shaping up and that after the opening arc, it feels as though a new world is opening up to us. And that it is a world full of glorious possibilities.

A quiet winter day in the life of the new Adventureman…or is it?