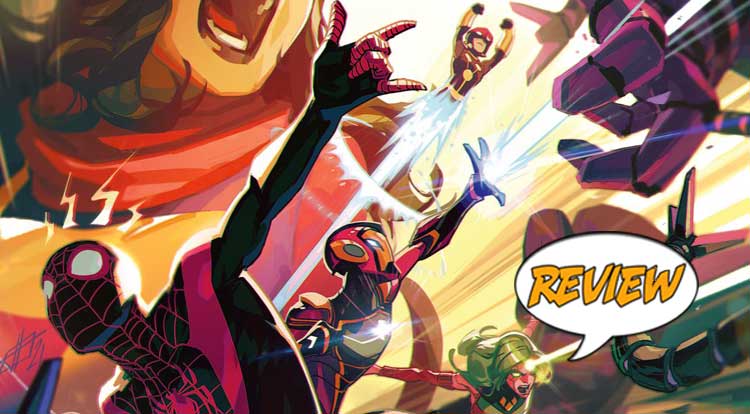 The Champions are no longer outlawed, but that doesn’t mean the threats are all done.  Your Major Spoilers review of Champions #10 from Marvel Comics awaits!

Previously in Champions:  The Champions win a major victory over Roxxon… only to discover a much deadlier threat waiting in the wings!  Can they win against vicious machines engineered to predict their every move?  Or is it the end of the line for our young heroes?

Thanks to the undercover efforts of Spider-Man, Nova, and Ms. Marvel, Roxxon’s new social media app has been shut down, but there’s still a problem: The wizard behind the tech has taken control of the secret robots that were the last phase of the plan to control teenage superheroes.  The team confronts them, but quickly discovers that the machines have pretty huge flaw, in that they can’t predict the actions of kids who aren’t a part of their network.  This allows Viv Vision and Ironheart to gain the upper hand, but before they can capitalize on it, the treacherous Miriam Blakemoore, Roxxon’s utterly amoral social media specialist, pulls the plug on young Andre, making a public statement that shifts ALL blame for the disastrous launch to him and allowing her corporate overlords to emerge unscathed.  Ms. Marvel is annoyed, but the rest of the team reminds her that they did everything right this time, and their undercover plan worked, leaving them with an overall win, and a team selfie to celebrate.

THE METAPHOR IS THE MESSAGE

Champions #10 is the last issue of this volume, and it’s actually quite good, even if the characters themselves point out how on-the-nose the villain’s robots are, trying so hard to protect teenagers that they end up harming them instead.  The character interaction between the five core Champions is well-handled, and I appreciate how they mostly sound like actual teenagers in these pages (but I still miss the full team from the previous volume).  Vecchio’s art is smooth as silk in these pages, and I appreciate the slightly cartoonier vibe that he has given the the Champions, with exaggerated forms that remind me of Humberto Ramos, but more controlled.  Nova’s helmet and Ms. Marvel’s proportions are especially well-done, and the lush coloring helps bring is all to life in fun ways.

Champions #10 is the last issue of Champions for now, and once again I hope they’re back sooner rather than later, as this story is clever and creative, channeling what feels like real teenage attitudes without condescending and giving us truly impressive art for 3.5 out of 5 stars overall.  Given that Kamala, Sam, and Riri no longer have their solo titles, only Miles still has a monthly book, so I’m hoping that there’s a new Champions volume in the works, but this issue provides enough closure for a little while.

It seems weird that I'm reviewing my second Champions #10 season finale in as many years, but cancellation hasn't stopped this team before, and this final chapter provides closure for the ridiculous 'OUTLAWED!' arc.