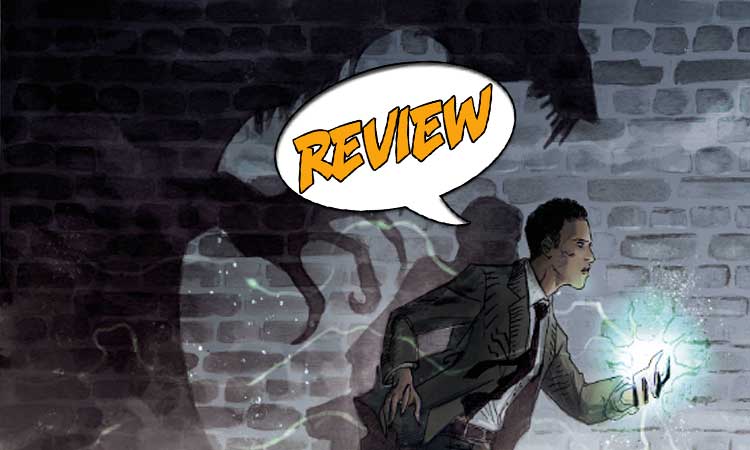 Foxglove and Abigail are drawn into the web around the werewolf. Where is he from and what is he doing here? Find out in Rivers of London: Monday, Monday #4 from Titan Comics!

Previously in Rivers of London: Monday, Monday: Peter Grant becomes the point of view character, and we see that life with baby twins is complicated. He gets called back in to work about the werewolf, and the foxes are on the job to protect the girls. Peter goes to the hospital to interview the officer who was running the “shop.” He doesn’t remember much except for a glyph on the guy’s shirt. This leads Peter, with Billy in tow, to the Goblin Market. This in turn leads to Peter’s interview of Kyle (see also issue #1) and then to a little hideaway where someone has been camping out. But then a phone call brings him the news that his dad is in the hospital after a heart attack.

JUST ANOTHER DAY OF MISCHIEF

The careful reader to Rivers of London: Monday, Monday #4 will have caught onto the fact that we’ve been circling closer to the center of the plot by following different characters who are involved. They are well-developed enough to have their own distinct concerns, reactions, and thoughts. Not only does this give us remarkable insight into the story, but we really see how much these characters connect to one another.

Our center this time is Foxglove, one of the Fae living at the Folly. She doesn’t speak, so this is a nearly wordless issue. But it is a delight to the eyes as it goes through the last of the missing pieces to the story and also takes some time to tidy up loose ends. In doing so, it captures the glorious world of Rivers of London and makes it feel real.

Foxglove awakens, eager for the day. She runs naked through the Folly, which is a scene we saw in issue #2 and which primes us to keep our eyes open. Molly puts her foot down, and things look boring until Abigail arrives. Foxglove convinces her to go to the train station with her so she can sketch. But once they are there, she sees the young man in the red hoodie with the glyph, the werewolf. Abigail approaches him, he grabs for her, and Foxglove interposes, startling him. He runs and they chase, and soon the young man has almost caught up with Kyle when he gets caught by the police.

The young women catch the young man in the hoodie and Foxglove clearly, if wordlessly, asks if she can keep him, to which Abigail sternly says, “No.” But they take him back to the Folly and find out his story. He is Oscar, from Sweden, and his apparently happy family includes a wolf. He came to London to sightsee and ended up helping/befriending Kyle. When Kyle goes to sell his goods at the “shop,” his werewolf aura comes out, but not deliberately. However, along the way, he has lost his passport.

They need to go back to the hideaway. He stops to help get the twins (and the foxes) up the stairs – Oscar is plainly a really nice young man. They get to the hideaway at the same time as Peter and Billy, and Oscar sneaks in from behind to recover his wallet. As they sneak back through the Folly behind Nightingale, who is now keeping an eye on the twins, he of course catches them, and the foxes recognize Oscar as a werewolf. The truth comes out in a story as perfectly plotted as I have ever seen. The epilogue is like tying a decorative ribbon around it.

SEEING EVERYTHING FROM ANOTHER ANGLE

I love that Rivers of London: Monday, Monday #4 is mostly wordless. It focuses our attention on the artwork so we make the connections with scenes we have seen previously. It draws us deeper into the world and makes us as complicit as Foxglove and Abigail are. The opening panel sets the entire tone. Foxglove loves to paint, and she is in her studio sleeping in front of a Roy Lichtenstein style self-portrait in which she is saying, “Now what trouble can I get myself in today?” Even if you aren’t familiar with the characters, this gives you enough to appreciate the upcoming shenanigans.

I love how much is communicated through the facial expressions of Abigail, Foxglove, and Oscar. Curiosity, determination, independence – these are all young people living life as it comes and getting into situations as one does at that age. It’s just that, in a world where magic is all around, some of those situations can become complicated very quickly. I also love that this story takes the werewolf trope and turns it around to give us a werewolf who is friendly and well-adjusted, and who comes from a close-knit family. He is refreshingly low on angst.

BOTTOM LINE: A DELIGHT FROM COVER TO COVER

Rivers of London: Monday, Monday #4 succeeds brilliantly in giving us a day in the lives of so many characters and finding the various delights of life that nestle among the trials and tribulations. If you are familiar with Aaronovitch’s work, it is indescribably fun to watch everyone have their turns and affect the story.

What a difference a day makes in so many lives.