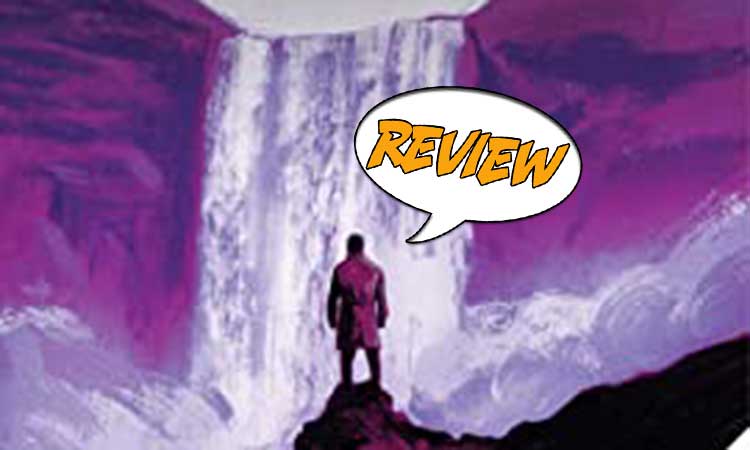 Things have been set in motion, and with them come more mysteries and more bloodshed.  Your Major Spoilers review of Lost Falls #3 from ComiXology Originals, awaits!

Previously in Lost Falls: FBI agent Pyncheon has been sprung from jail by the orders of a mysterious man in the woods, while a cult assembles.  Meanwhile in town a murder of high school student has the town on edge.

Lost Falls #3 opens with Daisy in the midst of a dream about her mother.  Her father comforts her briefly before everyone heads out to Drake’s funeral.  In the woods, the man who ordered Pyncheon released from jail, cryptically speaks with him before leading him through the waterfall, revealing a bunch of strange dwellings behind the water. At a town meeting, Daisy’s father tries to settle the town down.  Elsewhere, the cult, along with their recent kidnapping victim has summoned something from the water and it heeds their call, then things go very poorly for them.  Back at Daisy’s house, her friend Jay arrives and they have a heart to heart about the recent events before kissing.  He leaves when Daisy’s father arrives and meets someone on the road with glowing eyes.  Jay then returns to Daisy’s house, changed.

Lost Falls #3 has some good things going for it.  It’s spooky, it has a diverse cast of characters with fairly distinct personalities, and it has just the right amount of bloodshed to be disturbing but not campy or grotesque, and the mystery so far has been engaging.  Yet, it’s that mystery part that’s causing some of the problems that this issue has.  Whenever a series is based around a mystery, there comes a point where there needs to be some payoff, even just a little bit, even if it’s a red herring.  There’s none of that in Lost Falls #3 and without it, it’s just another issue of a cast of characters doing seemingly unconnected things, while something inexplicable happens in the background.  This is for the most part tolerable here, but I couldn’t help but find myself losing interest in what’s happening here, mostly due to the snapshot quality all the events of this issue has.  Nothing is shown to completion, which while possibly an intentional decision, is one that left me a little less willing to put in the effort to engage with the plot.

TOO MUCH OF A GOOD THING

Lost Falls has a good art style, especially for this genre.  Having most of the character’s faces be made up of swaths of colors rather than detailed line work is a bold choice that works really well here at being something interesting to look at.  Where it doesn’t help the issue is when some detail is needed to differentiate characters or to make clear that something subtle is happening.  For example there’s a page near the end of the issue where Jay confronts someone, but it’s not clear who it is, it almost looks just like him. It’s moments like these when some more detail would’ve been nice.  Other than that, it’s a visually appealing book.

THE BOTTOM LINE: HAS SOME EXPLAINING TO DO

A lot of things happen in Lost Falls #3.  There are murders, and reveals, and kissing, and mourning, and something vaguely supernatural happening.  Yet, without any sort of explanation, these all come off as independent of each other, giving this book a lack of cohesiveness the series really needs at this point in the plot.  It’s still a good looking comic, even though the art style gets in the story’s way at times.  3 out of 5 Stars.

Lost Falls #3 represents a point in the story where it really needed just a bit of exposition, but there was none leaving this issue feeling like a series of unrelated events that will also need explaining at some point.