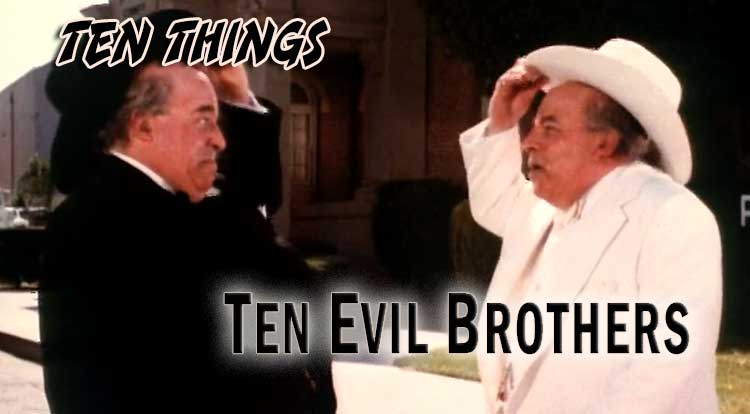 He ain’t heavy… but he is nefarious, sneaky and overall wicked. Welcome to Ten Things: Ten Evil Brothers! A native of the fascist-controlled planet Georwell (which has also been described as a future Earth in some versions of the tale), Ivar Osk is an abusive bully who grew up torturing his brother, Jemin. Gifted with the same growth abilities, Ivar followed his brother into superhuman government service and relished the chance to beat on him some more when Jemin was declared an enemy of the state. Say what you will about him being a worthless brutal jackwagon (and indeed, he is) his cowl and visor look cool as heck. A clone of Barry Allen created by a government facility in the hopes of generating their own super-speed super-soldier, Pollux is a big blue example of the “Nature vs. Nurture” argument. Mistreated by his handled, Pollux escaped captivity and killed them in revenge. Pollux and his “brother” clashed, but when it seemed that The Flash would die from a sniper’s bullet, Pollux threw himself in front of it and took a mortal wound to save Barry. It’s a fittingly thematic end for a man who takes his name from the mythological character who agreed to give half his immortality to his dying twin. Initially the leader of a team called Bloodstrike, Cabbot Stone had his memory wiped and was rebuilt into a stone-cold killer known by that name. Both before and after his transformation, Cabbot repeatedly clashed with his brother Battlestone, the leader of rival team Brigade, presumably over who is the more deserving carbon-copy of Cable. The only reason I’ve chosen Cabbot as the evil one today is that his team is a black-ops unauthorized operation created by a secret underground conspiracy known as The Covenant of the Sword, while Battlestone operates with government clearance. Another brother who isn’t exactly evil but still endlessly clashed with his sibling is David Knight, son of the original Starman. David idolized their father and dreamed of being the new Starman, but was killed early in his career, leaving brother Jack to take up the mantle. Through magical machinations and #TimeTravelShenanigans, David was sent back in time to the year 1951, where he became that era’s Starman. It was a blessing that allowed Jack and David to repair their relationship and make up for time lost, after which David was returned to the moment of his death. A member of the Shi’ar Imperial Guard, real name unrevealed, Zenith used his energy powers to hunt down and capture threats to the empire. Unfortunately, that included his brother Raza Longknife of the pirate crew known as The Starjammers. He had energy powers that allowed him to access another superhuman’s powers, but that didn’t help him much against Carol “Future Captain Marvel” Danvers. Originally believing that his powers came from literal G-O-D, Hank Hall took the death of his brother and crime-punching partner, Dove, very hard. Without the balancing aspect of Dove, Hawk spun out of control, embracing rage and violence, rejoining the Titans to keep his murderous impulses in check. That’s when he discovered that his powers weren’t biblical in nature, but in fact were imbued by an avatar of capital-c Chaos, and only a new Dove with the power of order was able to balance out his madness.

It worked… until he killed her and transformed himself into the armored monster, Monarch. The biological son of Howard and Maria Stark, Arno Stark spend decades in an iron lung, watching his brother Tony inherit an empire and become a world-renowned hero. When Tony discovered his existence, he and Arno adventured together, but after Tony’s death, Arno became obsessed with a menace called the Extinction Entity, taking over Stark’s companies and trying to subject all artificial intelligences to his control. Tony was forced to trap his brother in a simulated reality to stop his bid for world domination.

Worst of all? The Extinction Entity didn’t even exist. It was a delusion brought on by his neurological condition. Not exactly evil, but definitely amoral, Tukla Oly rejected his family’s expectations that he become another career soldier, instead becoming a gifted thief. This put him in conflict with big brother Rident, a law enforcer, forcing Pakrat to make a run for New Earth. Stowing away on a random ship, he found himself dragged into the Dark Dimension by Martin Champion, becoming a de facto member of Atari Force.

Don’t let this image fool you, Pakrat is a coward at heart, unless you have him cornered.

Nobody puts Pakrat in the corner. It’s never quite clear why super-villain The Monarch (born Malcolm Fitzcarraldo, according to one telling) hates Rusty Venture so much, but it’s ironic, given that they’re almost certainly siblings. A resurrected Jonas Venture admitted as much, hinting that he helped fellow hero The Blue Morpho father a child the old fashioned way. There’s also the matter of a positive DNA test, but since that was in the last episode of the show, it’s still up in the air. Maybe the movie will address it, whenever that gets made. Can you get more evil than murdering half the beings in the universe? It’s gonna be a pretty tall order. Thanos of Titan (whose brother Eros is better known as Starfox of The Avengers) was born with Deviant Syndrome that made a thick-limbed purple rhinoceros man, and the very sight of him drove his mother into a killing rage. He grew up to have a crush on the embodiment of Death itself, and worst of all, he killed Captain America with his bare hands!

I mean, Cap got better, but still, that’s a douche move.

Once again, this week’s topic, Ten Evil Brothers, is all me, but feel free to follow along @MightyKingCobra to suggest your own! There’s always more Ten Things madness on my Twitter or check out the full Twitter archive here! As with any set of like items, these aren’t meant to be hard and fast or absolutely complete, if only because the shadow of Cain & Abel is a very loooong one. Either way, the comments section is below for just such an emergency, but, as always: Please, no wagering!