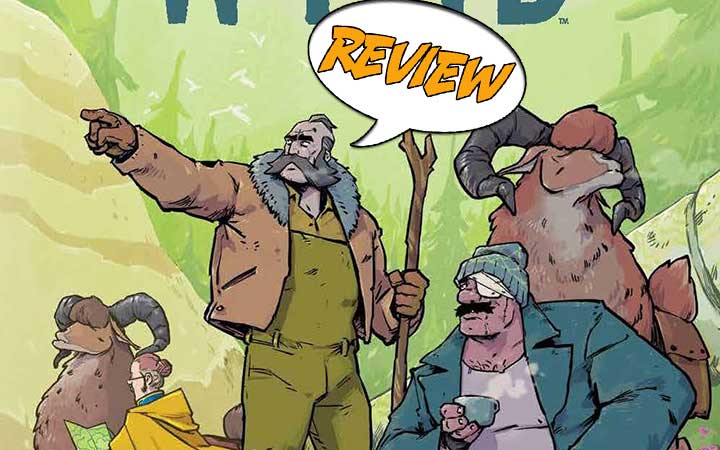 Does Wynd have a mysterious and heroic destiny, or is he adventuring simply to help the boy he loves? Find out in Wynd #9 from BOOM! Studios.

Previously in Wynd: On the run from the Vampyres, Wynd meets a Faerie who happens to be the daughter of the one who helped them reach the Duke’s ship. She is upset about her mother’s death, but on finding out that Vampyres are here, she takes him on ahead to Escalion and sends people to find his friends. In another part of the woods, Basil, Titus, and Ash continue to make their way to the land of the Faeries. They are attacked by a large spider, which they overcome. They throw the body into the river, and Ash takes this opportunity to pin a note to the spider, a note to King Yossar. Zedra and her Vampyres continue to hunt Thorn. Zedra decides to try to wipe out Escalion…but make it look like King Yossar is the one responsible.

A REALITY CHECK FOR ALL

As Wynd #9 opens, King Yossar summons his Queen. He tells her to go ahead, to tell him what she wants to say. She declares that the hate his father planted in him has twisted his mind, is killing him, and will kill them all. He has found out that she sent emissaries to the Duke to tell him about Yossar’s conspiracy with the Vampyres, yet accuses her of starting a war. He may be dying, but he is still King. He orders her to be locked in her chambers and sends Roderick and a handful of men to find Basil and his companions.

The Faeries work to heal Thorn. Lady Merien was able to let Wynd, Yorrik, and Bastian in to observe for a while, but she needs to take the Prince and his cousin to the Council. Wynd finds Oakley who wants to talk to him. She thinks they should leave and head to Northport. They are just kids, after all, and this is major political stuff. Wynd does not want to go. He is drawn in by the thought of making the world a better place. Oakley bluntly challenges him as to whether this is really all about Thorn, who still doesn’t really know him at all.

Wynd flies off and lands on a tree branch where he finds a small, old person with four arms who has also come up here to get away from people. They ask to see Wynd’s wings and is enthralled, saying they had never thought they would see the day when the Winged Ones returned, and that Wynd was touched by the Four Winds and would help to set everything right – namely by slaughtering all the troublesome Vampyres and humans.

The Council meeting does not start out well. Bastian says they did not mean to cause any trouble. The Counselor points out that they brought the Vampyres, and Yorrik is the son of the Mad King of Pipetown. The Duke, an idealistic dreamer, is not better. Lady Merien takes their part, pointing out that they are young people who are trying to get to the Capitol. She will lead them herself; all she wants is a small group of guards.

Merien finds Wynd who is still worried about Thorn. She asks if he knows him well, which leads to an explanation of the whole, complicated answer. But they also find some common ground in Merien’s mother, and her belief that everyone had the potential to change, and in changing to grow and to become better. As it happens, Yorrik overhears this part of their conversation.  The tree they are in creaks and moves, and he is exposed, but he admits to inadvertently eavesdropping. Then there is a louder rumble, and Merien suddenly realizes that the tree itself is coming down!

THE CITY IN THE ANCIENT FOREST

Wynd #9 uses art to great effect, not just to establish settings, but to reflect moods. We don’t see long distance views of Escalion, but what we do see gives us just enough to build more of the city in our minds. This is a city built in the giant trees, and we see this organicity in the operating room where the bed Thorn is on appears to have grown out of the floor. The young people observe from a gallery up above which looks more constructed, but the decorative style is reminiscent of leaves. This shape and flavor continues outside where Oakley and Wynd talk, so even though their location is clearly different, it is also connected.

I have become more impressed by the expressions of the characters as the story has developed. The main characters are young people on the brink of becoming adults, at the cusp of realizing that the world is a complicated place. We see in Wynd himself some traces of his youthful optimism and idealism, but this takes turns with moments where reality hits him straight on, forcing him to think about the bigger world.

BOTTOM LINE: A PAUSE FOR SOME THOUGHT

As the world opens up, Wynd #9 brings the main character and his friends closer to realizing what a dangerous and complicated place the world is. And as the next generation, their responsibilities start to loom.

On their way to the Duke, Wynd and his friends learn what others think about humans.