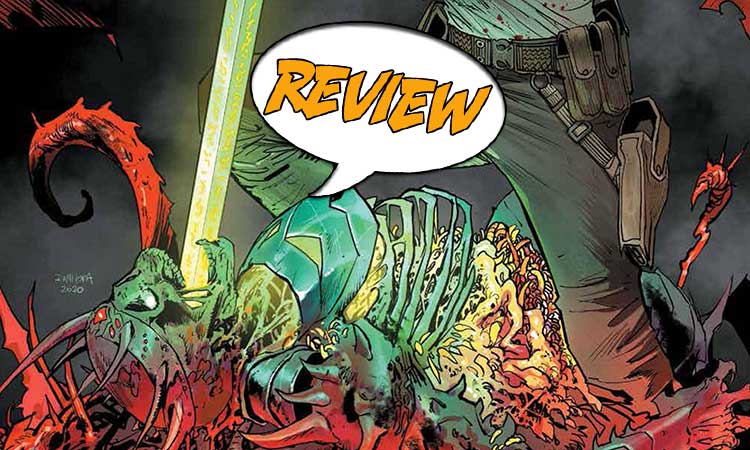 Once and Future #18 Review

Duncan and Bridgette struggle to stay one step ahead of Elaine, or is it Arthur, or Merlin? Or does the plot run even deeper than that? Find out in Once and Future #18 from BOOM! Studios.

Previously in Once and Future: Duncan and Bridgette try to stay even with Elaine, even though the supernatural activity has now drawn the attention of the secret government agency headed by Hempleworth. They meet face to face in the Otherworld. Galahad pulls Elaine out of the castle where everyone is but does not seem to recognize her even though she is his mother. Merlin, it turns out, has manipulated everyone to be here. Galahad returns to the castle, finds the Grail, and flees with it. The dragon turns toward the remaining people, but Rose notices it is wounded and manages to befriend it.

Once & Future #18 opens with Rose, Duncan, and Bridgette on the dragon’s back. Duncan urges Rose to make it breathe fire, easier said than done. Merlin urges Galahad to greater speed and to bring the grail back to him. The dragon breathes on Galahad. Elaine has found her way back to Merlin and she demands that she save his life. He insists he cannot interfere with a holy quest. Pretty rich, coming from someone who has been manipulating so many of the characters involved. Elaine insists she will kill him and Arthur. He counters that all their plans will be for nothing. She holds firm.

He capitulates and uses his magic to turn the dragon away. However, his blighted presence also causes the Grail to fade out of existence. But, he tells Elaine, at least she has her son back.

Bridgette also notices the disappearance of the Grail. This will skew reality. They leap off the dragon and make a run for it, picking up Hempleworth and James along the way. When they reach the portal, it is no longer there. Rose recalls when she used a candle to be their tether (several issues ago), but now on this trip, they have no tether. But what they do have is the bathtub that linked to the boiling cauldron in the Grail castle. It works, and they all return to the real world.

Hempleworth departs. Rose and Duncan give Bridgette a lift home. They remember the Green Knight, but have a year before he is officially a problem again. Bridgette invites them in for a New Year’s meal which should be nice and quiet.

Hempleworth goes to Downing Street to report. He tells the Prime Minister that “they” are working within their parameters, and all the recent problems seem to have stabilized. He gives the impression that things are going well. Then James steps in. The PM placed him in Hempleworth’s office. He wants to know the truth of what’s going on. To give Hempleworth some credit, he has an idea of what the dangers are, and why they should be kept secret. The PM has Hempleworth taken away, and James tells him all about the monsters and offers to show him video footage.

But then, remember that nice, quiet dinner at Bridgette’s residence? As everyone sits around after the meal idly watching television, the show is interrupted for a broadcast by the PM. He is on all the channels. He makes an announcement about an ancient, monstrous evil and he shows the footage. And all I will say about the ending is that it was beautifully set up, and it was not what I was expecting, and I may have shrieked just a little.

A STUDY IN ARTISTIC CONTRASTS

The twists and turns come fast in Once and Future #18. Starting out with a dragon is solid, and I found it interesting that whatever it shot at Galahad manifested as several beams of something, probably magic, rather than the expected flames. The Otherworld has always been an interesting dark mirror of what we might expect of Camelot. I really like the depiction of Merlin. He’s a skinny guy with a big white beard, clothed in a hooded robe, which all seems straightforward. But his eyes glow, pinpoints of light surrounded by radiating lines of bright red which looks magical and uncanny.

Contrast is used to great effect. Of course, there is the well-established contrast in coloring between the real world and the Otherworld. But the art and layout also help with this effect. Panels in the Otherworld may be at angles or have insets. At times, their borders are drawn roughly and not perfectly square. A whole page is laid out at an angle from the actual edges of the page. It all emphasizes that the Otherworld is topsy-turvy. And when we return to the normal world, the panels also fall more into line. Right up until the PM’s broadcast, that is.

BOTTOM LINE: I WASN’T EXPECTING THIS

Hats off and a chef’s kiss for Once & Future #18! Thank goodness it says “To Be Continued…” at the end, but it is also a tidy little place to stop and take a breath. This is a book well worth reading. Just masterful.

Who is really in control of the Arthurian legends, and what is their plan?