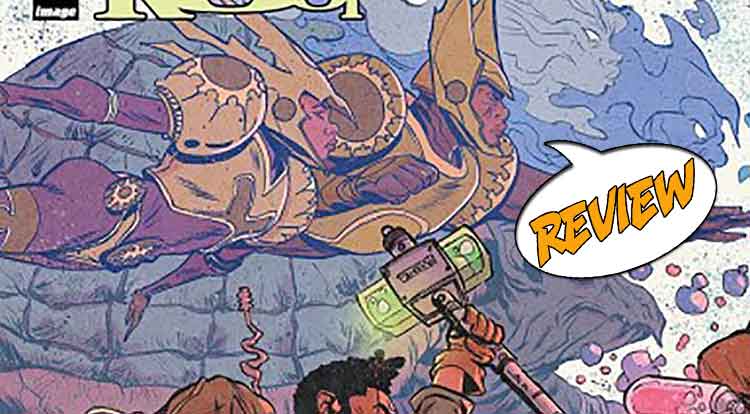 The Sangerye family settles uneasily into the new normal. What unexpected perils lie ahead for them? Find out in Bitter Root #11 from Image Comics!

Previously in Bitter Root: The Sangerye family have fought for generations against the Jinoo, people transformed into monsters by hate. Their root work can free people of the infection, but the latest invasion of Jinoo has revealed another kind of monster, the Inzondo, born out of grief and trauma. The chaos caused by both of them was like food to the evil deity Adro. The Sangeryes fought with all their weapons and skills, but could not defeat her. But finally Dr. Sylvester, Adro’s former ally, sacrificed himself to drag Adro back to Barzakh.

BACK AND BIGGER THAN EVER

Bitter Root #11 opens with a brief recap of what happened in the last story arc. A lot happened there, so I found this welcome. It is not very long, and it merges seamlessly into this new arc. Besides, it makes this book completely accessible to new readers. By the time the action starts, we are oriented and ready to go with it. We catch up to Dr. Sylvester, who dragged Adro back to Barzakh and finds that the demon has shed its skin and slipped away. In Barzakh, we transition to Charlie Sangerye. Cullen and Nora left him for dead and departed for Earth. But Charlie is not dead. And he has drawn the attention of someone else who claims they can defeat Adro.

We jump ahead several months to the new normal in Harlem. Many people have become Jinoo or Inzondo. Some live in fear; others have learned to adapt. The serum from the roots helps, especially when mixed with alcohol and music. Berg is here; he has become an Inzondo, a monster formed when sadness turns first to anger and then to hate. But while he has learned to control his inner monster, his outward appearance remains changed.

Ma Etta remains busy with her root work, and she has found someone new to train – Elijah, the young policeman. He has a natural gift for working with plants, something he never expected. Etta has been fighting Jinoo since before Lincoln freed the slaves. But it is now 1925, and a man in Germany has written a book that is full of hate. She is starting to wonder if they have ever really cured anyone. It’s quite a thoughtful moment.

Blink has been reunited with Nora, the mother she believed was dead for so many years. They have both changed, as Blink realizes in church one Sunday. Blink no longer believes in what religion offers. Her mother still does. Despite their differences, they do still love each other.

Enoch meets with his counterparts from other cultural backgrounds to try to figure out how to close the gateways. This is where Charlie comes back into the picture. He is Enoch’s brother, and the two of them have long seen the world differently even though they have the same goals.

Cullen, rather than face his father whom he left for dead in Barzakh, has decided to travel with Ford. Johnnie-Ray Knox saved Ford’s life at the cost of his own, and Ford carries the news to his people. Cullen stays outside as Ford talks with the family. Johnnie-Ray’s father never thought much of the young man. But Ford was there as he turned his life around and really made it matter. Then the young man’s father tries to ask whether his death has anything to do with all the strange happenings and the stories of the Devil coming down to earth.

Cullen, who has grown up in the family tradition and resented it, gets more impatient, until a couple of the strange creatures that can sense monsters get his attention and he decides to see what has riled them up…

Bitter Root #11 continues with its striking use of color palettes. As scenes and characters change, so do the colors, and I really like how they are used. In the night club for example, the main colors are red and magenta with some violet. It makes it feel like the music is hot and that people are able to let go and enjoy themselves. In contrast, Ma Etta’s scene is in earthy tones of brown and green which feel appropriate for doing work with plants. The warmth of the colors make the scene feel close and cozy.

The inking is strong and rich with texture. The detail in character features is amazing. I particularly love Ma Etta. She looks as though she has seen a lot of years, and she looks like she has done a lot of hard work. But she is patient enough to be a healer and a teacher, and thoughtful enough to wonder about whether she had made a difference over all these years. She comes across as strong enough to be the matriarch of a family who are all headed in different directions.

Bitter Root #11 is a terrific jumping on point if you have not been reading this award-winning (and well-deservedly so book. The use of history to provide a basis for the fantasy horror give the book a depth that is difficult to rival.

Adro is gone but not defeated, and Inzondo have become part of life.