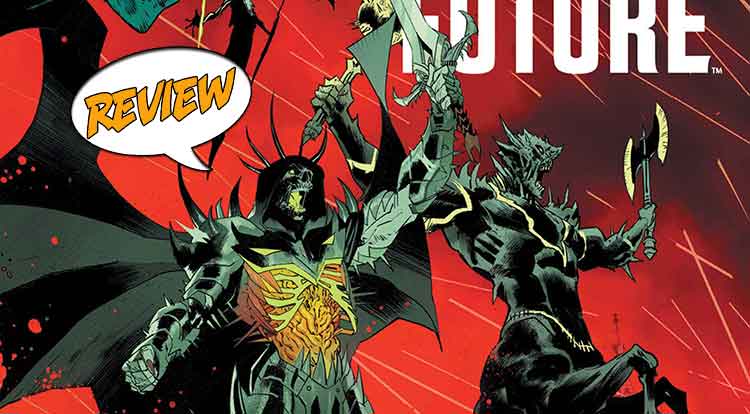 Once and Future #17 Review

Duncan inches closer to the Grail again as Merlin and Elaine try to outflank him. Who will get to it first? Find out in Once & Future #17 from BOOM! Studios.

Previously in Once & Future: Arthur is still impatient to rise again. In the Otherworld, Duncan and Bridgette find Lancelot, who in turn is looking for Elaine, and they find themselves facing a dragon. In Rose’s flat, Hempleworth accuses her of causing too much trouble as his men search for Elaine, who escapes back to the Otherworld through boiling water. Her screams distract Lancelot for the moment. A portal opens in Rose’s flat. Hempleworth orders his men to secrecy and orders Rose to stay behind and keep low as he goes through the portal.

AN INTERSECTION OF STORIES

Once # Future #17 opens with Galahad, who is now a monstrous centaur, telling Nimue (also his mother, Elaine) that he was sent to protect her. Hempleworth’s men open fire, and she quickly announces to Lancelot that Galahad is his son. Lancelot deflects their attack, the dragon awakens, and after a few moments of chaos, Bridgette comes face to face with Hempleworth. She wants to know who he is and why he’s here. He is understatedly cross with her; she is unabashedly tart with him.

Rose goes to the apartment across the street where she was supposed to keep safe. Instead, she finds a rifle, heads back to her own place, and goes through the portal. Who doesn’t love a tough historian?

Back in the Otherworld, Hempleworth is brought up to speed in the current events. His one surviving soldier, the one who seemed to be spying on him, is understandably confused. Bridgette advises him not to ask questions but, as he says, one of his cohorts was eaten by a dragon. Bridgette tries to figure out what story is going on based on the variety of characters currently in play. Basically, it all comes back down to the Grail.

Whatever is going on, Merlin seems to be behind it. After Galahad pulls Elaine/Nimue out of the castle, she tries to talk to him. He does not recognize her. She calls out to Merlin. He responds (using the maggots that crawl upon Galahad – so delightfully creepy) that they need the Grail. She sends Galahad back for the Grail and talks further with Merlin. He admits to having figured out Nimue’s plans. He has manipulated everyone to be here.

Hempleworth and Bridgette keep up the verbal sparring as they move through the castle toward the Grail. But they’re too late – Galahad is there before them. Duncan is set to attack him and advises the soldier (James) to grab a sword. There is a little amusement at his expense as he admits he hasn’t been trained to use a sword. Then Rose arrives and Galahad demands to know whose side she is on. She forgets about who’s who in this story and says “Duncan,” and I can identify. It is a little challenging to keep track of everyone’s roles. They straighten this out and Galahad gallops off. And then Rose notices the dragon.

SO MANY PLAYERS IN THE PLOT

Once & Future #11 is full of action and plotting, and the tensions run high. We see this in everyone’s expressions, which read clearly. We can almost see Elaine calculating on the fly, first when she manipulates Lancelot to protect Galahad and then later, when she manipulates Galahad to go after the Grail. Her anger and frustration are reserved for Merlin, who has been manipulating her with just as much ease. And then there are Hempleworth and his men, wide-eyed as they see unbelievable things, although the Minister plainly has some idea of what to expect.

The dragon is enormous and inexorable. Living in the Otherworld, it has accents in brilliant colors and its breath is a bilious yellow-green. I do like the coloring so much in this book. It plays with so many interesting combinations of colors, often complementary, and it has become a way to bring a lot of flavor to the Otherworld which, otherwise, could be a dreary and dead-looking kind of place.

BOTTOM LINE: THINKING ON THE RUN

It is admittedly challenging to keep track of the potential storylines and who has stepped into which character’s role at this point. However, even if it is beyond your knowledge of Arthurian legend, Once & Future #17 delivers and exciting chapter full of intrigue and action.

Grail, Grail, who’s got the Grail?