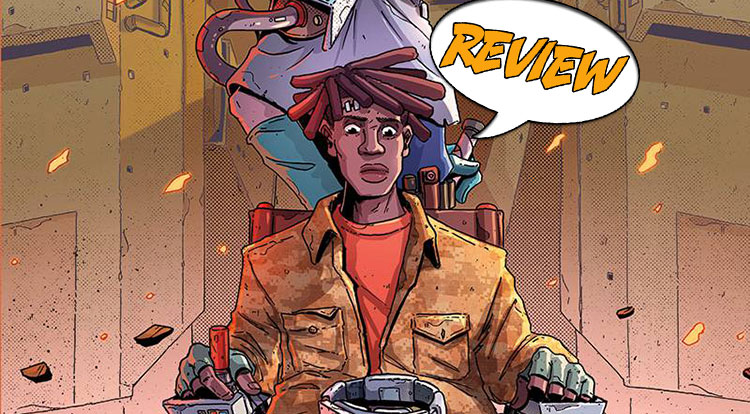 Evan is coerced into helping the Order’s police force. The Order is all powerful – so who is upsetting their comfortable world? Find out in Giga #2 from Vault Comics!

Previously in Giga: Evan lives in the world of the Giga, enormous mechs that once fought over the world, then became a habitat for humanity, then became the subject of their religion. Evan was once a religious novice, but after a terrorist attack kills the Monsignor, and it appears that his friend Aiko was involved and was also killed, his life has taken a dramatic turn. Years later he tries to make a living collecting scrap, a difficult life for a double amputee. A good friend of his, Mason, works in the Order as a sort of policeman, and he wants information from Evan about nomad Giga behaving erratically. We also learn that Evan has built a robot (Laurel) which is illegal here. She is malfunctioning and needs repairs. He takes her into the woods, up into a Giga where he runs into a group of Outlaws known as Dusters.

Giga #2 opens with an incident from Evan’s and Aiko’s past when they are both young initiates. She surprises him with a pair of prosthetic legs she has made because she wants him to be able to come with her someplace. He would rather make his own way, and we learn that he has been studying neurocybernetics, although to actually do it is heresy. In a little throw away line that becomes a theme through this issue, Aiko says that there is no heresy among the initiated.

In the present, the well-armed band of Dusters questions Evan, wanting to know why he’s there and whether he’s alone. He came with Laurel; she is hiding among the machinery. As he admits that he’s alone, a group of police come in and take everyone into custody. Evan now finds himself being interrogated by them, at least until his former friend Mason comes in. He tracked Evan, and has pulled him out, but he really wants to know why the Dusters were there. He also wants to know about Evan’s robot. He uses this knowledge as leverage to get Evan to rebuild the Giga’s interface so they can learn how it died. I like this take on the expert coerced into an investigation.

Mason goes to see Father Crowquill who has been taking apart and reassembling a mechanism on one of their sacred books. Mason recognizes this is a crime, but Crowquill understands his own power and explains that flirting with “a little damnation” is essentially his prerogative. He makes another interesting comment that speaks to the history and religion of this unusual world. The Giga known as the Red King was a vessel of evil, and when it finally rusts and decays, the evil it holds will be unleashed on the world. Is there a grain of truth behind this belief?

Evan is under time pressure to fix the interface and cannot work on Laurel, who continues to deteriorate. Meanwhile, in the Duster camp, we learn they did not recover the device they were looking for. They were searching for this for a woman, not just any woman, but Aiko. Her group is providing weapons in turn for the Dusters’ protection.

Evan finishes his work and goes with Mason and his men back to the Giga. It is not until they get there that he learns he will not be the one using the interface; that job has been given to Brother Saber. Interfacing with a Giga is dangerous – he has only a minute or so before his brain will be fried. This time it is one of Mason’s men who points out the heresy. Brother Saber survives his minute and claims that it was Dusters who killed the Giga. Still on the ground below them, Evan finds the remains of another interface device…

The art of Giga #2 is solid. There is a lot of tech on this world, both the equipment that the Order and the Dusters are using currently and all the old stuff lying about in the Giga. We don’t know exactly what everything is, but it is all so interesting. I also like the way Laurel can fold herself up when she is hiding. She is almost creepy with the way she can sneak into buildings, hiding in the ductwork as she keeps an eye on Evan as best she can.

The enmeshment of religion and law enforcement is a fascinating warning tale. I like the juxtaposition of the outside of the police HQ, apparently in a Giga, imposing and impassive, draped with red banners with a symbol on one end, against what goes on inside. This is not a police force built on modern scientific methods; this is a police force that operates on intimidation and brutality. A veneer of order covers and hides the rottenness within.

Giga #2 is a solid read. This is an intricate world with a history we’ve barely begun to understand. But the underlying dynamics reach deep into humanity, dredging up the places where things can head off into unpleasant directions.

Evan just wants to live his life, but finds himself inexorably drawn into a crime of mythic proportions!