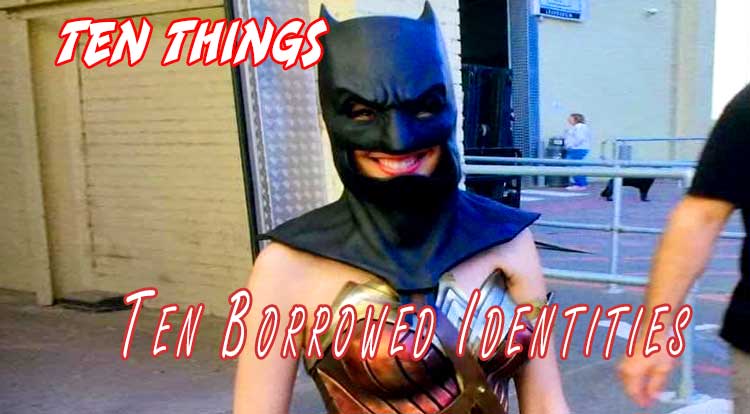 Superman has Clark Kent, Moon Knight has a crowd of guys, but some of our favorite supers had to get creative.  Welcome to Ten Things: Ten Borrowed Identities! Created by The Jackal as a perfect clone of Peter Parker (or perhaps vice-versa, even the creators have gone back and forth on this point), Ben Reilly was left for dead, but escaped to wander the United States for several years.  When he returned, he initially became The Scarlet Spider, hero in a hoodie, before taking over the “his” old secret identity when Peter Parker moved away to take care of Mary Jane and maybe an unborn child (again, accounts vary.)  Ben was a borrowed Spider-Man for a few months before succumbing to a clone degradation thingy and reverting to ash before Peter Parker’s eyes. After being brutally murdered as Robin, Jason Todd returned to life due to #TimeTravelShenanigans, eventually moving to New York City and taking on Nightwing’s name and costume.  He also got some strange shape-shifting powers, clashing with the real Nightwing multiple times before fleeing New York and leaving the black-and-blue tights to “big brother” Dick.  it’s not the last of his borrowed identities either, as Jason has also used the Red Hood alias created by the man who murdered him, which is more disturbing than turning into a snake and trying to eat his sorta-brother. As part of an alliance with Rita Repulsa designed to wipe out their respective color-coded nemeses, Oroku Saki, usually known as The Shredder, used the Dragon Coin to transform himself into a grid-powered version of his usual spiky ninja self.  Though head led an army of putties and Foot Clan ninjas, the combined forces of the Teenage Mutant Ninja Turtles and the Mighty Morphin’ Power Rangers thwarted his evil plans, sending him home without a morpher. A palace guard for the royal family of Czarnia, Lobo claimed to be the REAL Main Man, with the chunky, filthy bearded version we’ve all come to know and love just trading on his name.  Indeed, upon arriving on Earth, he killed the “other” Lobo and set out to make his own mark in the universe.  After a few adventures, he dropped off the face of the Earth, and was last seen in captivity, in the clutches of Brainiac 2.0.  The original Lobo returned, thanks to #TimeTravelShenanigans, and the character known to fandom as “Faux-bo” (and not affectionately, either) will likely never be spoken of again. One of the Horsemen of Apocalypse, Death’s big moment came when he murdered Wolverine in cold blood, leaving the immortal X-Man as a corpse in his wake.  When Death was unmasked, though, he was discovered to be Wolverine himself, with Logan having been replaced by a Skrull behind-the-scenes.  This double case of borrowed identities ended with with a team of X-Men led by the telepathic Psylocke finally freeing him from the mental dominion of Apocalypse.  It’s one of the more outlandish stories of a particularly turbulent time in Logan’s life. When Matt Murdock’s identity was revealed to the world at large, Danny Rand (better known as the incumbent Iron Fist) took it upon himself to try and convince the public that DD and MM were not the same man.  Strangely, Danny joined the rebel side of the superhero Civil War under Captain America still using Matt’s identity, which seems mighty presumptuous to me, though Danny-Devil did end up imprisoned in the Negative Zone for his troubles. After being cloned into a younger, more vital body with working legs, Charles Xavier spent some time in outer space with the Starjammers.  During one mission, he took on the powers and aspect of Phoenix (who was at the time dead, and was also a female student of his, which made the whole thing awkward on multiple levels) for a little cosmic action.  He was later injured again, returning to his wheelchair after his brief time in beautiful tights.  It’s proof at least that Cockrum’s designs are perfect, as the costume even looks great on Xavier. After being stranded in the Mongolia after his family was killed by raiders, Richard Grey Jr, was taken in by a family of animals, much like Tarzan, even learning their ways as Tarzan did.  The fact that Richard was adopted by condors and learned how to fly from them is a bit ludicrous, but even sillier is the fact that when he arrived in the United States, he met his exact facial twin.  Worse still, his twin, Senator Thomas Wright, was killed, with The Condor fraudulently taking on his identity and his seat in Congress, punching crime on the side.

The 40s were, as Rick James would say, one hell of a drug. One of the more tragic bits of comic history came when DC editorial chose to write a story where Superman had to find someone to fill in as Clark Kent when all his usual associates who would put on a rubber mask were not available.  He chose to ask the one man that any American could trust, circa 1963, the Commander-In-Chief, who gladly agreed to help.  Sadly, this story was in the works when President John F. Kennedy was assassinated, only appearing after the President’s death with the agreement of the White House, making for a historically interesting moment that’s one of the saddest of the Silver Age. Worrying that his bow-and-arrow weren’t up to the task of being an Avenger, Clint Barton borrowed not only Hank Pym’s identity, but his size-shifting namesake particles.  He took over as the heavy-hitter of his squad for a while, but was lost in space during the Kree/Skrull War, returning to Earth as Hawkeye and maintaining that identity for most of his remaining career.  He did resume the Goliath role during the Kree/Shi’Ar war some years later, in an attempt to once again become a power player, but only briefly before taking up the bow once more.

Thanks to Faithful Spoilerite James Humphries (@Valdreag17) for this week’s topic.  Feel free to follow along @MightyKingCobra for more Ten Things madness on Twitter or check out the full Twitter archive here!  As with any set of like items, these aren’t meant to be hard and fast or absolutely complete, if only because swapping identities is now a whole sub-genre of comics.  Either way, the comments section is Below for just such an emergency, but, as always: Please, no wagering!