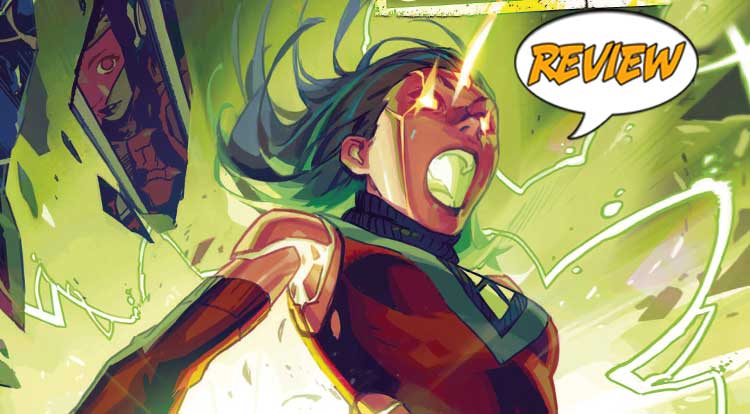 Who can you trust when your very identity is against the law?  Your Major Spoilers review of Champions #3 from Marvel Comics awaits!

Previously in Champions:  The Champions are on the run!  Ms. Marvel, Spider-Man, Nova and Ironheart race to stay one step ahead of C.R.A.D.L.E., but someone keeps leaking their location, and they’re running out of places to hide.  With a spy in their midst and their allies locked up in a disturbing correctional school, they’ll turn to the one adult they know they can still trust…

DON’T CALL IT A PRISON (EVEN IF IT IS)

We begin with a truly horrifying testimonial from teenage superhero Bombshell, who tearfully thanks the government and C.R.A.D.L.E. for saving her from her destructive life of teenage superheroing.  The other incarcerated Champions (Snowguard, Starling, Locus and The Wasp) can’t figure out why she’s acting the way she is, and honestly, she does seem brainwashed.  The kids start an insurrection of their own, as Bombshell calls in their overseers (read: guards) and the whole thing turns into a full-on riot.  Elsewhere, Viv Vision has made a trip to Kansas in the hope of figuring out her life, having once seen a movie about a girl and her dog who went on a transformative journey.  She meets a kind woman who lives in a shotgun shack in a cornfield (as all Kansans do, we have a cornfield shack each, we’ve had it up to here with bloody cornfield shacks) and restores her electricity.  The woman thanks her with a meal and a place to sleep, imparting a little wisdom to the android as well.  Somewhere else, founding Champions Ms. Marvel, Nova and Spider-Man, along with Ironheart are on the run from C.R.A.D.L.E., which always seems to be a step ahead.  The end up crashing in the treehouse of a random child supporter, only to awaken to bullhorns ordering them to surrender…

…and a very familiar voice.

“By order of the sovereign nation of Krakoa,” intones Cyclops, the lost Champion, “I grant asylum to these individuals.”  On the one hand, hooray, the kids don’t have to be on the run, but on the other… This is now an international incident.  I’m of two minds about this story, in that I like the drama and the chance to really dig in to the psyches of our heroes, but I also feel like it’s a very much a rehash of Civil War’s superhuman registration act.  The presence of Justice and Speedball on the side of the authorities really bothers me here, and it feels like a lot of adult superheroes mighty have some input on this mess other than just Cyclops.  Even with those concerns (which are honestly pretty common with big event stories), I enjoyed this issue quite a bit, and I felt real fear for the Champions on the run, pride when The Locust stood up for her beliefs and a big ol’ “Hell YEAH!” moment at the arrival of Cyclops and Dust to assist their friends.  This issue’s art is also quite good, dealing with the difficult issue of showing who is who without familiar costumes or coloring in the prison sequences, and showing off how exhausted the young heroes are.  The final page is truly gorgeous, and Cyclops has seldom looked better.

BOTTOM LINE: BUT THAT LAST PAGE REVEAL IS KILLER

In conclusion, your honors, Champions #3 is a good comic book that ties into an event I’m not sure about, successfully smoothing over my worries with strong characterization and story, some solid emotional beats and effective art, earning 4 out of 5 stars overall.  If only they’d explain why the former New Warriors are on the wrong side, I might even get on-board with the entire ‘Outlawed!’ storyline, but either way, this one is worth your $3.99.

This all feels like we've seen it before, but Civil War was never this visceral or personal, and the final page reveal gave me literal goosebumps. Nicely done.