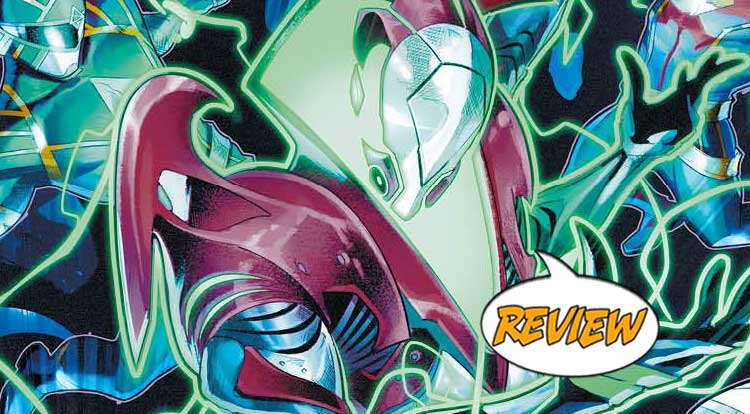 New threats and old, and all the Rangers on the firing line.  Your Major Spoilers review of Mighty Morphin’ Power Rangers #54 from BOOM! Studios awaits! Previously in Mighty Morphin’ Power Rangers:  While the Mighty Morphin Power Rangers battle Lord Zedd’s Dark Rangers, the Omega Rangers come face to face with an all new enemy, one that threatens to destroy all life in the galaxy… and already has a head start!

Last issue ended with the reveal that planet Gorvinos 3 is entirely destroyed, with the Omega Rangers confronting a strange being on the surface, a creature that calls itself The Empyrean.  It claims to have judged the people of Gorvinos wanting, causing the Omega Rangers to confront it.  They are quickly out-matched one-on-one, and call up their Omega Zords, only to find that they are likewise overmatched.  With a little help from their robot friend Captain XI, they manage to strike it hard enough to cause some damage, only to find the creature gone in the wake of their blast.  Jason sets a course for Earth after finding no record of the creature in any databank, intending to check in with Zordon for any information he might have, carrying the few devastated survivors of Gorvinos with them.

Much like the beat-down the Mighty Morphin’ team got from the Dark Rangers, this issue’s showing by the Omega Rangers isn’t promising, reminding us that there’s always a new problem for the Rangers.  Hidalgo’s art is good throughout the issue, but there are a few moments where the Zords, and even the Rangers’ bodies, feel oddly proportioned.  The battle sequence also has a moment where it’s not visually clear what’s happening until it’s over, and then it takes the narration from XI to tell us what just happened, but there are also the incredibly touching moments on the ship between the Rangers and the refugees.  There’s no appearance of the titular team this issue, but that’s not really as much of an issue as it might be, given the successful raising of the stakes with this story.

This series has been consistently good for so long that an issue that just pretty okay feels a little bit like they’re off their game, but Mighty Morphin’ Power Rangers #54 makes for a well-crafted read, with strong art and story that succeed more often than not, earning 3.5 out of 5 stars overall.  It’s also an issue that signals a possible huge new threat on the horizon, which I hope leads to more awesome Power Ranger adventures to come.