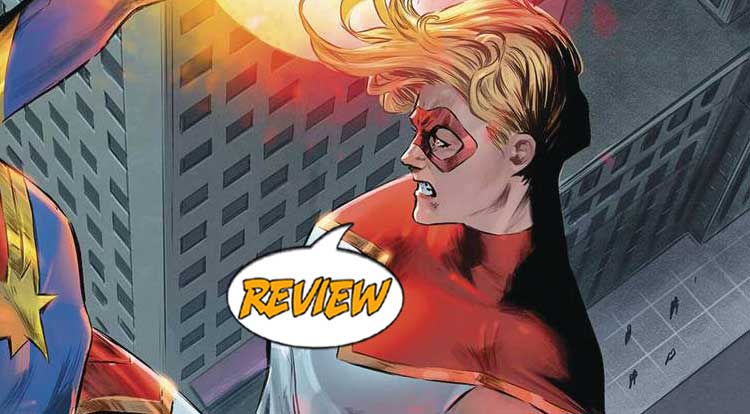 Star faces down Captain Marvel, the woman who killed her!  This may get messy…  Your Major Spoilers review of Star #4 from Marvel Comics awaits! Previously in Star:  Star’s been on a journey of self-discovery, and with the help of some unexpected teachers, she has managed to learn more about both herself and the powers of the Reality Stone now bonded to her.  She’s also still on the run from some of the most dangerous villains in the universe, who will not stop until they wield the Reality Stone themselves.  But it’s Star’s second confrontation with Captain Marvel, the woman who killed her, that will cut the deepest.  When the dust settles, what will be left of… anything?

We open in mid-fight, as Star tries to defend herself against Captain Marvel with a makeshift energy armor that looks almost exactly like X-Men Armor’s powers.  The two heroes battle back and forth for a while, with Star getting more and more desperate against her much more experienced opponent, leading to the flashback that explains why, retelling her awakening in the morgue after their first battle.  Star manages to save herself, but both heroes are suddenly waylaid by The Black Order, Thanos’s alien guard.  Though they hold their own, it quickly becomes clear that they’re out-gunned and out-manned, leading Star to offer the strange device that Black Swan gave her last issue to Captain Marvel, who activates it…

On the one hand, I really wanted to like Star, even though her name is very generic and her costume is weirdly unbalance, but this issue has some overall issues in pacing and balance.  At the end of last issue, Star was spared by The Black Order for reasons unknown, only to suddenly have them arrive and unleash aitch-ee-double-hockeysticks this time, with Black Swan once gain playing the role of provocateur for overly mysterious reasons.  The flashback actually sets up the conflict between Star and Captain Marvel pretty well, but it’s hard to accept that Marvel is the villain of the story with her established bona fides as an Avenger and her history of heroism.  There’s also a real mismatch between art styles in the present-day portion of the book versus the flashback.  Both are okay (though the flashback feels grittier and features scratchier inking), but they don’t mesh at all, making the visuals feel inconsistent in the back-and-forth transitions.

BOTTOM LINE: OKAY, BUT ONLY OKAY

In short, Star #4 is very much an average comic, with some issues in storytelling and pacing that the creators don’t quite overcome, but enough parts that do work to make it balance out, earning 2.5 out of 5 stars overall.  I’m still not sure what the long-term plan for Star is, assuming there is one, but I’m not sure that she is meant to be an ongoing part of the Marvel Universe.  I’m just hoping that we don’t have a ‘Freedom Ring’ situation on our hands.

It's an okay issue, but the use of both Captain Marvel as antagonist and the weird, esoteric Black Order as villains makes it all feel very disconnected.