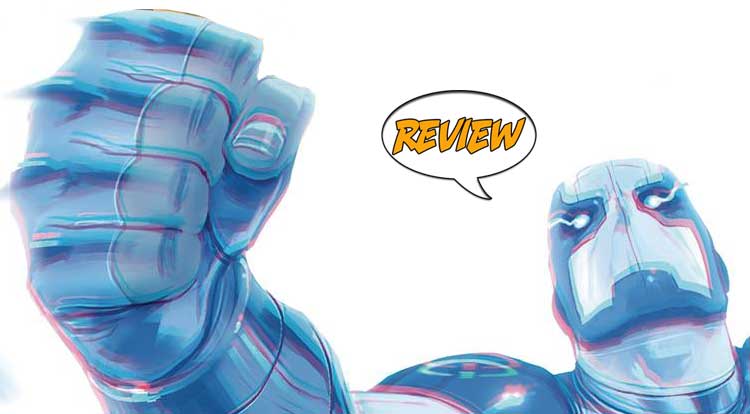 Previously in Quantum & Woody:  Home Alone, the boys are left to defend their lair against would-be bandits!  What is Woody’s dark secret?  The truth is finally revealed!

As this issue opens, Eric “Quantum” Henderson achieves a whole new state of being, thanks to his jealousy of Woody’s new power to see the future.  He turns himself into an energy ghost and flits through the city, even discovering that he can possess living creatures with his essence.  Unfortunately, he left his power band behind, and when he returns to their secret lair, not only have Q&W been discovered, but a fanboy has put on his band!  Woody, for his part, is freaked out by Eric’s absence, mostly because his molecular structure is starting to destabilize.  Oh, and super-villains are attacking, because he’s been posting on social media without masking his location information.  A fight ensues, during which Oliver successfully uses Quantum’s powers, but as they’re about to dissolve into atoms, Quantum manages to reform inside his power band, leading to the climcactic “CLANG.”

As a casual fan of the original Quantum & Woody books, this issue is fun, but never quite manages to capture the inspired idiocy of the original.  Woody is nearly unlikeable throughout, and while I appreciate the humor, it’s a little too slapsticky for my tastes, as well as a bit mean to Woody.  Yes, he’s an idiot, but I always thought there was more too him.  Divorced from expectations of measuring up to Christopher Priest’s work, though, it’s an okay issue.  I’m not wild about Browne’s unrestrained art, with bodies that always seem wildly contorted and strangely proportioned.  The art gives us a lot of emotion, but it also feels a bit cartoonish and over-the-top, which combines with a sense of silliness in the story to make this issue feel a little bit disappointing to me.  Still, there are some strong moments to be had, and the climactic return-and-bracelet-crash is well-plotted.  Also, with the villains at large, there’s still a chance for this story to get closure later on down the line.

Judged entirely on its own merits, free of the shadow of the original, Quantum & Woody #4 is a pleasant, breezy reading experience with art that isn’t really to my tastes, but does a good enough job of telling the visual part of the story, leaving us with a better-than-average 3 out of 5 stars overall.  I’m not feeling the need to rush out an pick up the previous issues of this volume, but it’s more than strong enough for me to be interested in another volume by these creators.