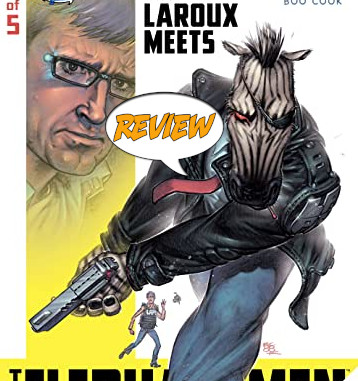 Richard Starkings returns to Elephantmen and brings us a new story! How are these elephantmen integrated into society? Are they still feared? Find out in ELEPHANTMEN #1 (OF 5) by comiXology!

Previously in Elephantmen: Elephantmen has been a successful title in 2006 that features a group of anthropomorphic people set in the 23rd century. This arc follows British documentarian Theo Laroux as he tries to learn more about the elephantmen in 2261 Los Angeles. He seeks to interview LAPD Lieutenant Trench, a zebra hybrid.

The story starts off with Theo running alongside Lieutenant Trench who is chasing a crocodile hybrid. As Trench shoots off a tranquilizer and arrests the man, the comic flashbacks to how Theo got there. Theo is headed to LAPD headquarters with cab driver Miki to interview Lieutenant Trench. He begins to ask him questions about his genetic modification and how human he really is but doesn’t get very far. To try and earn his trust, he asks if he can come along on patrol.

Theo begins to learn more about Trench and how he views the world. He continues to try to decipher how humanlike Trench is. He has a healthy sense of justice and willingness to do what he must to get the job done. However, he is triggered by a man holding an ivory necklace and Theo must try to calm him down. As the situation diffuses, Trench begins to chase a crocodile hybrid.

I know that this must have been in the works months prior to the events that have occurred in the United States recently. A book that features a hated racial species and an aggressive cop is a brave move. Despite this, I know that the point of the book is to be a reference to a “monster within” trope. This leads us to the main character, Theo, who seems to have a good head on his shoulders. Perhaps his fault is that he is too analytical but that comes with the territory. What could be his monster? Does he have something primal waiting to come out? This is, to me, the most interesting part of the story.

The book itself was well presented and brought you into the world. There are references to older issues of the story that I greatly appreciated. I think it grips you into the story but the hook relied heavily on anamorphic animals as your “wow” factor. The storyline thus far is actually quite common and overused but then you also get a zebra hybrid chasing the crocodile hybrid. I think this is a good first issue but there needs to be more depth to keep me hooked for the long run. The art was pretty amazing as well and I appreciate the interpretation of these animal-humans and how it jumps off the page. The image that stood out for me was a Rhino-hybrid holding a gun over a dead man. Cool stuff!

I enjoy the concept but I want the next issue to bring a little more depth of the characters and the tropes. If the storyline becomes too predictable, I’m afraid I won’t be in for the long run. However, this issue has a lot of strength and has my recommendation to be introduced to this world. 4 out of 5 stars for Elephantmen #1 by comiXology.

80%
80%
Cool but Predictable
A story about a reporter in an anthropomorphic world. What troubles will Theo and Trench get in?
axel medellin Boo Cook comixology Elephantmen Elephantmen 2261 Richard Starkings
Share. Facebook Twitter Pinterest LinkedIn Tumblr Email
Previous ArticleQuantum & Woody #4 (of 4) Review
Next Article The Death of Nancy Drew #2 Review