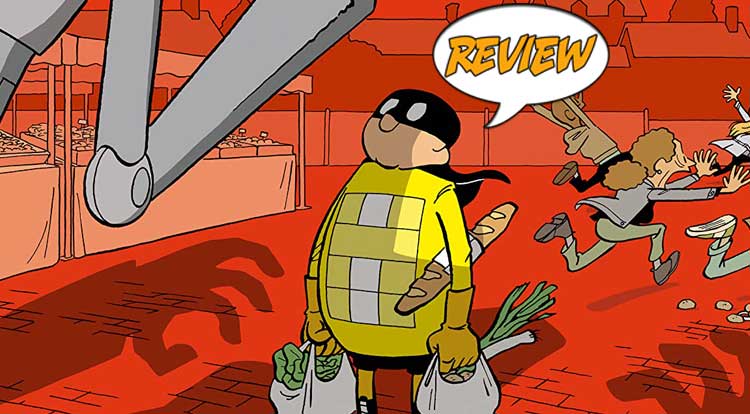 He may not look like much, but he’s the most powerful being in the world!  Your Major Spoilers review of Mister Invincible #1 from Magnetic Press awaits!

Previously in Mister Invincible:  He may be an average looking, unassuming guy in wrestling tights and a mask, but he manages to frequently save the day through his amazing (and sometimes unexplainable) ability to bend the laws of space and time…

In the small hamlet of Grandview, lives the hero called Mister Invincible!  Many heroes come from comic books, but his powers ARE comic books, as seen in his first adventure, wherein he saves the day from a pair of gun-toting thugs by seeing them in the panel beneath and leaping down to help innocents, only to grab their weapons from the next panel down…  it’s hard to explain, but trust me, it’s wonderful to see in action.  With the ability to travel outside the panels of his reality, Mister Invincible can defeat a recurring unnamed Mad Scientist (by aiming the lasers of his killer robot into the next panel to destroy it), stopping threats to his hometown and even training up his sidekick, the 2-D Boy, who treats each panel as though it’s reality were flat, grabbing objects in the distance as though they were tiny (because they are, because they’re drawn that way.)  It’s not as though he doesn’t face any threats, though,as Grandpa Jack can manipulate word balloons as though they are solid, while The Jester can travel through walls/pages as though they weren’t even there!

THE MAGIC OF COMICS

This comic is one of those reading experiences that cannot be explained, it has to be read, because the jokes and the action are predicated on a visual medium.  When The Jester travels through from the previous page to kidnap the mayor’s son or to steal valuables, it’s inspired, but the delivery of the dialogue makes it even more so.  Mister Invincible knows his powers back and forth, because he’s the only one who knows that his world is a comic strip, which gives him not only confidence, but a truly impressive degree of abilities, saving the day from before it even needed saving.  Best of all, the book is really fun, with an absurd sense of humor driving the plot on every page.  The designs are likewise truly amazing, with cartoon influences (especially those of Herge and other European designers of the Silver Age) showing in every panel.  By the time I got to the third strip in this issue, I knew that it was going to be a favorite of mine, and I truly hope that there’s more to come.

If you love comics, not just adventure stories or Batman or the idea of punching things so hard they expode, but REALLY love comics as a medium, I cannot recommend this book enough.  Mister Invincible #1 is a truly inspired bit of comics work, with art and words working in perfect synthesis, breaking the rules of sequential images and art in ways that are so clever, so entertaining and so much fun that I could not live with myself if I gave this issue less than 5 out of 5 stars overall.  I want everyone to experience the joy of this comic firsthand, as it constitutes a very rare perfect single issue read.