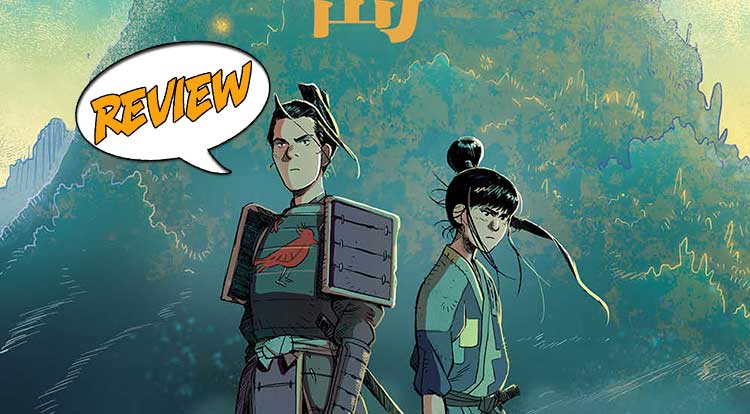 A couple escapees try to return to the Shogun, but can Hana and Kenichi head them off in time? Find out in Ronin Island #11 from BOOM! Studios. Previously in Ronin Island: Hana gets into her first skirmish and must deal with the psychological aftermath of killing people. Seeing some survivors, she wants to spare them. Before she can get to them, the Shogun sends in his Byōnin. Elder Jin arrives with a small force on horseback. Hana warns her as the monster prepares to shoot spores, and Jin sacrifices the horses to get all the people out. When they return to the village, they find people fearful, distrustful of the few soldiers who were captured.

Ronin Island #11 opens after three of the Shogun’s men flee the Island, stealing a boat. Hana wants to chase after them. They took the big boat, and they won’t be enough to crew it. Kenichi, who thinks they should stay behind and prepare for an attack, reluctantly goes along. He shoots an arrow, striking the man who is trying to manage the sail. The little rowboat can catch up to them, but they have bows also. Hana and Kenichi flip their boat for cover, but the Shogun’s men shoot a cannonball at them.

They manage to get on board the ship, but the Shogun has sent reinforcements out as well, led by the leader of the bandits. Kenichi strikes down two of the soldiers, and Hana kills the third almost by accident. Upon seeing the other men approaching, she spills out gunpowder and ignites it, burning the ship.

The two young people return to the Island just before the remaining Shogun’s men are about to be killed. Hana is appalled. But these men tried to run away, Boonsri tells her. And Elder Jin gave the order. One of the men claims they ran because they were scared.

Hana apologizes to the soldiers for telling them that the Island was for everyone. This brings on a tirade from Kenichi’s mother who blames Hana for their troubles, accuses her people of leeching off the Islanders, and calls the refugees trash. Kenichi stands up for them, for Hana, and for the Island’s ideas. Hana is loyal to the Island, but she hates its hypocrisy, and that her only choice now is to stand up for it. Jin spares the prisoners.

Back on the mainland, the bandit chief has brought the badly damaged boat back. He’s not sure that they can use it and fight for the Island. But the vengeful Shogun has changed his plans. He wants to send the Byōnin to the Island and he knows just how to do it. Sato is dying, and with his last breath maybe he can distract them long enough for the Shogun to attack!

I really love the character work in this book. The Shogun is a liar, and possibly crazy, but in a twisted way he is also very, very clever. Sato is honorable to a point but is also acutely aware of his own weaknesses. Hana and Kenichi have grown so much, and still they balance each other very well.

As the Shogun’s forces draw ever closer in Ronin Island #11, the fact that the stakes are so high is etched into the faces of every character. The desperation is almost tangible. Of the three Shogun’s men who escape at the start, the one struck by Kenichi’s arrow looks apprehensive, as though he has grasped that the Islanders may not be so easy a fight. I like that the three of them, bit characters as they are, are not simply cookie cutters.

The short but bloody fight on the ship is colored in reds and oranges, a stark contrast from the nighttime blues and purples. I like how this sets off Hana’s momentary horror at having to kill yet again, and how some panels also look almost like lacquerware. It’s also a nifty foreshadowing of setting the ship ablaze, and it’s cool to see how the artwork can be used in such a way.

BOTTOM LINE: SETTING UP FOR THE BIG FINISH

Ronin Island #11 has grown beyond the story of Hana and Kenichi growing up to a complicated tale of people react when their ideals bump up against a harsh reality.

The Island’s hidden weaknesses are exposed as the Shogun prepares to attack!