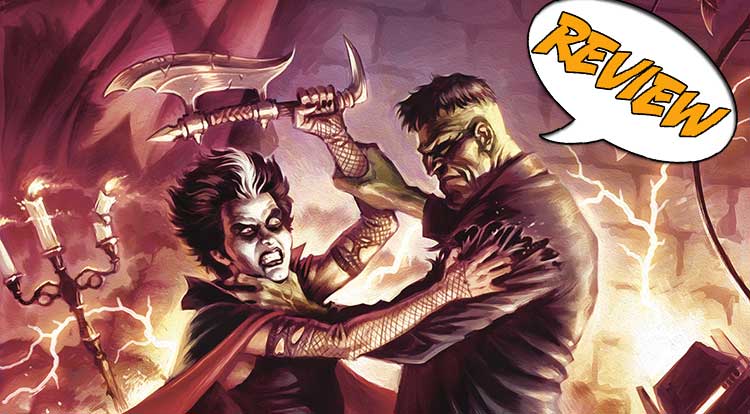 Jerri Hunter is fighting demons, literal and at the bottom of a bottle, in Count Crowley: Reluctant Midnight Monster Hunter #4 from Dark Horse Comics.  Struggling s to come to terms with the assault that undid her career, Jerri also has to deal with the fact that monsters exist.  Can she survive?  Find out in our Major Spoilers review! Previously in Count Crowley: Reluctant Midnight Monster Hunter: When Jerri Hunter is forced to abandon her aspirations to be a television news reader and is instead forced to host the nightly Creature Feature on her local television station, she thinks things can’t get any worse.  But when she discovers her predecessor, Count Crowley, fought actual monsters, and that she is now expected to take up the mantle, things go from bad to worse…

Jerri Hunter had it all as newsreader for her local station, until her pig of a co-host moved on her.  Approaches to the all male management to sort the problem out back fired, and suddenly Jerri was busted down to hosting the nightly Creature Feature.  From there, things went from bad to worse, as she struggled to cope by taking to the bottle.  Then she discovered monsters are real.

Count Crowley: Reluctant Midnight Monster Hunter #4 is a really interesting read, a blend of supernatural action thriller with real world concerns that touch on the treatment of women in society.  Jerri’s sexual assault is treated with respect and conviction, and her descent into alcoholism is depicted as being punctuated with seem very poor choices, sending her into a spiral.  This all helps to underpin the more fantastical elements of the story, which enable Jerri to find herself once again and commit to a better way of life.  It’s not all serious social issues though, as Jerri also has to deal with an assortment of oddball characters, and the terrifying prospect that the man she recently encountered was in fact a werewolf.

So credit then to writer David Dastmalchian for his mature handling of some very difficult material. It feels real without becoming bogged down, and cleverly, allows him to link Jerri’s plight with the monstrous goings on in her town.  Because aside from her personal demons, Jerri has to embrace the fact that not only do monsters exist, but a conspiracy around them threatens to undermine the leadership of the country.  Dastmalchian hints at this conspiracy in a well handled sequence, ensuring that the keen reader will have many more monsters to encounter, and for Jerri to display her skills in dealing with.  But before we get there, hats off to his excellent world building and scene setting.

Artist Lukas Ketner brings his A-game, not only to the interior art, but to the supreme cover he has drawn, which brings to vivid life the encounter depicted in Count Crowley: Reluctant Midnight Monster Hunter #4.  In the issue itself, Ketner takes a realistic approach.  The city Jerri lives in is your usual, run of the mill place, worn and lived in, as are the people she encounters at the AA meeting.  Ketner is very good at individualising his characters, and giving them real moments of human warmth, often with a look or a gesture.  There are two really poignant scenes in this issue, when Jerri’s attacker calls her at home – Ketner depicts the shock of the call by a series of ever closer close ups as the voice on the telephone insinuates itself into Jerri’s head.  This then triggers a montage of images as Jerri’s drinking spirals out of control.  The second scene, where Jerri flashes back to the meeting reporting her co-hosts attack on her to management, is depicted in a sinister close up of a bunch of smug, self-satisfied men determined to look after their own.  It’s devastating.

Aside from that, the action sequence near the end of the book is handled with verve and pace.  Ketner breaks up the page with a series of jagged edged panels as Jerri flips and flops through the air, avoiding the monster before hacking it to pieces with a series of flourishes.  It’s a fun, exciting end to an entertaining issue.

BOTTOM LINE:   WORTH IT

Count Crowley: Reluctant Midnight Monster Hunter #4 is a fun, thought at times, harrowing read.  The 80s setting goes a long way to giving the issue plenty of atmosphere.  David Dastmalchian brings some real life issues along, blending them effectively.  The real life issues are handled in a straight manner, ad Jerri is never depicted as anything but a victim of circumstances – but not beyond her control.  After a struggle, Jerri takes her situation into her own hands, and begins to own her rehabilitation.

Imagine an older, drunker, more disbelieving version of Buffy the Vampire Slayer, and you’ve got Count Crowley: Reluctant Midnight Monster Hunter #4. Entertaining, sobering and a fun read, this is a really interesting book everyone should check out.