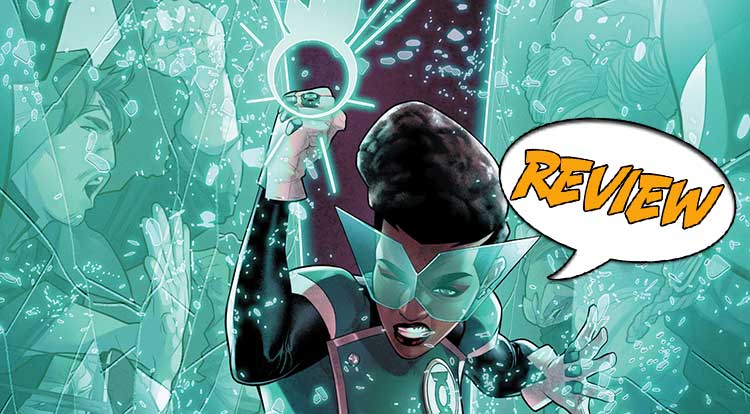 Tensions are higher than ever before on The City Enduring, and they keep rising.  It may already be too far gone for one Green Lantern to actually help. Your Major Spoilers review of Far Sector #3 from DC Comics, awaits! Previously in Far Sector: Green Lantern Sojourner “Jo” Mullein has been assigned to The City Enduring, a planet sized city that houses three different races.  To keep everyone in check, the city uses something called The Emotion Exploit, which eliminates harsh emotions. But a few murders have caused tension in the city and furthermore a group using a drug like substance called Switchoff to feel emotions again, have become more vocal.  Jo set out to investigate the murders which led her to the home of a powerful politician named Marth, who she discovers is using Switchoff.

Far Sector #3 opens up still in Councilman Marth’s house.  He suggests that he and Jo play a game that looks a bit like chess.  She reluctantly agrees and manages to get another history lesson about The City Enduring while she plays.  It’s also revealed that the powerful members of The City Enduring can be above the law.  Jo leaves and heads home. As she tries to sleep she thinks about lone lawmen from old westerns. Her sleep is interrupted by a distress call from the city’s peace keepers.  She rushes out to see what’s up and discovers that a massive protest and counterprotest has broken out.  She’s informed by the peacekeepers that if the situation isn’t diffused, they have orders to kill everyone. Jo leaps into action and breaks up the two groups using her ring. It turns out one group is using Switchoff and is protesting for the right to have emotions, while the other is claiming that the emotions are too dangerous and those who use them are criminals, citing historical events as a reason. Jo manages to talk them down, but before they can disperse the peacekeepers prepare to open fire.

The series so far hasn’t been apolitical but it’s been very subdued.  Far Sector #3 on the other hand puts it all out there specifically with the topic of police brutality and the concept of law and order.  There’s a real effort here to show how groups of people are victimized and oppressed in the name of Law and Order. In this issue here are clear images of the Manzanar Relocation Center, a Richard Nixon campaign button with the words “Law and Order” on top and a depiction of the famous “Bring Back The Death Penalty” advertisement that Donald Trump put in the NY Times, replaceing Death Penalty with “Law and Order”.  On top of that, this issue touches on issues like scapegoating and social hierarchies. What impressed me though is that while these issues aren’t tiptoed around, they are also not presented as obtrusive to the story.  This doesn’t feel so much as a statement, but as a story that unfortunately is too relevant to our current world, like a good sci-fi story should be.

One thing that this series has been lacking has been good depictions of the Green Lantern ring’s powers. That thankfully has changed with Far Sector #3 but in an unexpected way.  In particular, when Jo separates the two groups of protesters, she does so with big walls of green.  Which at first doesn’t seem very interesting, but as the groups start settling down, the walls start to become adorned with peace symbols, flowers, and olive branches. It’s a small touch but it gives Jo’s constructs a bit of personality and in turn help inform the readers about her.

The Bottom Line: A Powerful Issue That Doesn’t Pull Its Punches

I think it was only a matter of time before this series began to touch more on current issues facing the world and The US in particular.  What’s nice is that Far Sector #3 manages to do this in a powerful way, but in a way that doesn’t detract from the story or feels out of place.  This issue is firing on all cylinders and manages to be not only accomplish both big plot storytelling and smaller personal storytelling, but the art is on point as well.  This has been the best issue of an already great series so far. 5 out of 5 stars.

Far Sector #3 is a powerfully written issue that succeeds at being a social commentary, sci-fi story, and visually impressive. This issue should make any reader excited for what’s coming with this series.