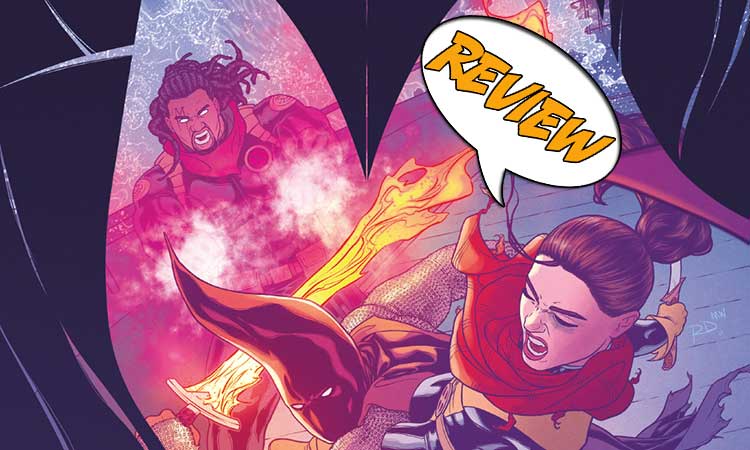 The battle of Madripoor rages on, as Kate Pryde and her Marauders take on hateful enemies from their past.  Your Major Spoilers review of Marauders #6 from Marvel Comics awaits. Previously in Marauders: Shinobi Shaw’s ship, the Upstart has come under fire from an organization that wants to end mutantkind called Homines Verendi. Captain Kate Pryde and her crew have sailed to Madripoor to save Shinobi and the refugees he’s taking care of, but were intercepted by Hate-Monger and X-Cutioner.

Marauders #6 kicks off with Pyro taking on both Hate-Monger and X-Cutioner by himself, with Iceman out of commission.  Finally Kate arrives on the scene and is able to help turn the tides of the fight, but not before Pyro gets pierced by X-Cutioner’s weapon.  Unbeknownst to any of the mutants, the strike has injected a microscopic submarine, helmed by someone calling themselves Yellowjacket, into Pyro’s bloodstream.  Kate then, literally, jumps ship onto the vessel carrying Donald Pierce and Chen Zhao, government reps from Madripoor, who have been observing the fray.  After some strong words and the arrival of Storm, the mutants leave the pair beaten, as Bishop takes care of Hate-Monger and X-Cutioner.  After the fight the Marauders go their separate ways for a while, leaving Kate alone, until Sebastian Shaw arrives.  He reveals that his plans have come to fruition and that means trapping Kate on a sinking ship.

One of the best parts of Marauders, has been the various power plays between Shaw, Emma Frost, and Kate Pryde.  Through the whole series they’ve been trying to establish power over each other while appearing to be on the same side with a common goal.  Marauders #6 kicks that up a notch and moves that maneuvering right into attempted murderville. Unfortunately, this escalation is revealed in a very over the top villain monologue style. Not to mention that Shaw’s scheme is pretty convoluted and relies on “Kate Pryde’s pride”. For a series that has been really good at hiding a white collar drama inside a swashbuckling adventure, this issue fails at that. The one thing this issue does do well is that it capitalizes on the whole “Why can’t Kate use the Krakoan gates” situation that was brought up back in issue #1 and manages to make a possible death feel tense in a world where death literally doesn’t exist for mutants.

The Bottom Line: First Disappointment of The Series

I’ve mentioned this a few times, on a few different platforms, but Marauders is my favorite of the new X-Men books spinning out of Powers of X/House of X.  It has a unique premise and so far has been engaging not only as a high seas adventure book, but also a high-stakes corporate drama.  Marauders #6 falls short on both of those fronts. The fight scene in the beginning isn’t very interesting and is over rather quickly and the big reveal at the end of the issue is convoluted and honestly, a bit ridiculous.  On the plus side, Kate’s personal story and character arc continues to be fun and engaging and has capitalized on foreshadowing in previous issues effectively. 3 out of 5

Marauders #6 is a lackluster issue in an otherwise good series. It ultimately fails to live up to the standard set by the previous issues and wastes what could be a shocking moment by turning it into a cliche mustache-twirling villain monologue.