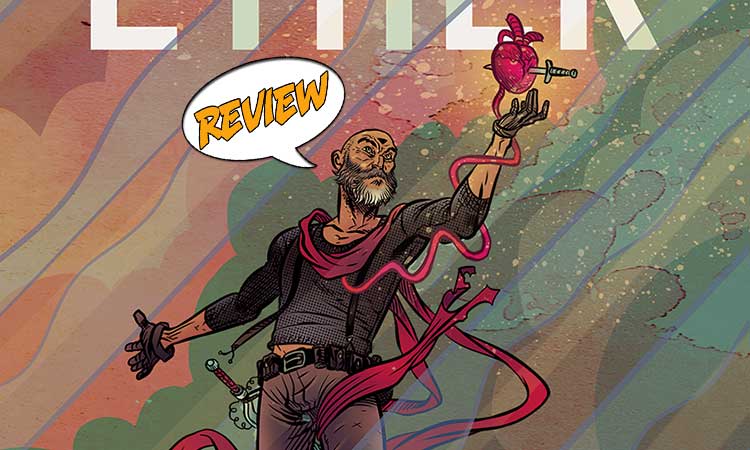 Boone Dias is the ultimate adventurer in Ether, but has he got what it takes to overcome Lord Ubel and his nefarious plans? Find out in Ether: The Disappearance of Violet Bell #5 from Dark Horse Comics! ETHER: THE DISAPPEARANCE OF VIOLET BELL #5

Previously in Ether: The Disappearance of Violet Bell: Lord Ubel has been manipulating a takeover of Ether including kidnapping Violet Bell. Boone and Glum fight a nearly indestructible Battle Sarcophagus, which gets trampled by giant bird creatures. It tells Boone its story and how it has pledged its loyalty to Lord Ubel, who is trying to sever all the connections between Earth and Ether – including Boone! The Battle Sarcophagus retreats into its shell but Grandor shakes it out again, and it confesses that Violet Bell was supposed to be the bait to get Boone. But as it turns out, she escaped, and she got Grandor to find Boone first.

A PATH PAVED BY DECISIONS MADE

All along there has been the hint of a love story between the ill-tempered Violet Bell and the thoughtless Boone Dias. As Ether: The Disappearance of Violet Bell #5 opens, they’re talking and catching up. She escaped the assassin and was determined to find out who sent it. Boone always wondered where she was. She thought he had gone home to Earth. He confesses there is nothing there for him anymore. He can stay in Ether now; he now can grow food to survive, and all his ties to Earth, including his family, are long dead. He has lost everything, and for once he realizes that his losses are all his fault. This is a big moment for someone who has spent issues trampling all over everyone else’s needs and feelings. And finally there is nothing to keep him apart from Violet Bell.

Meanwhile, they, along with Glum and Grandor, continue their journey to find Lord Ubel. He seems to be holed up in the ruins of an old city, which is strangely and suspiciously quiet, so much so that Grandor is disappointed that he doesn’t have anything to fight. By the time Violet recognizes that it’s a trap, Boone has taken off climbing up the walls to the highest point. Lord Ubel is there, of course, waiting for him so he can end him at the Falls of Allahgorey, where anything that falls into them disappears forever.

There’s a brilliant bit of dialogue just before their fight. Lord Ubel asks what it is that he says, “Violence is simply a failure to communicate?” To which Boone replies, “Enough talk. Let’s fail to communicate!” And as they do so, Boone thinks about what he’s learned over time. He has long been the only one who could stand the mental strain of going to Ether repeatedly. He could do it because he was prepared to let go of everything to get here. Now he has only one trick up his sleeve that Lord Ubel will not expect, and he is now prepared to let go of everything to save Ether.

He plunges and takes Ubel with him, leaving his three friends behind to see, to be shocked, to grieve. And then there’s nothing left but an epilogue. Violet Bell’s father grows old and dies, and she takes his crown and the throne. And she is pregnant.

Oh, man. It’s quite the redemption arc for Boone Dias who has been so much the stereotypical know-it-all action hero, blithely rushing in and damning the consequences. As wild as life in Ether was, it was always sad to see his family on Earth, tied to him, loving him and hating him, but still trying help him. At least he finally did learn something by the end. And I love that Violet Bell continues to be strong and in control. It’s a nice touch that she keeps Glum and Grandor at her side.

The world of Ether: The Disappearance of Violet Bell #5 is so richly huge. We’ve seen such a variety of imaginative, even crazy things. The art here does something really special. It balances out the intimacy between Violet Bell and Boon Dias while, at the same time, giving us a montage of Ether. The images may have nothing to do with the conversation, but they have everything to do with understanding Boone – these are the things he thought he could not give up. The trip is long, it’s dangerous, it has its goofy moments. The details in the art are rewarding in so many little ways.

The final confrontation with Lord Ubel is beautiful and moving. The setting is wonderful and the action is as full-on as anything we’ve seen in Ether before. Boone looks older and wiser than he has, and we see some memories of his past life, his life on Earth, what he sacrificed to be here. Those panels contrast with his realizations in the moment, and the emotion builds until the final fall which is glorious.

I thought Ether: The Disappearance of Violet Bell #5 was a terrific conclusion. Boone’s epiphany came dramatically late in the story, which makes his ending more poignant. He’d been a jerk so long it was hard to anticipate that he would grow, but it is satisfying to see that he did.

Ether: The Disappearance of Violet Bell #5

Boone Dias has to overcome himself in order to challenge Lord Ubel.