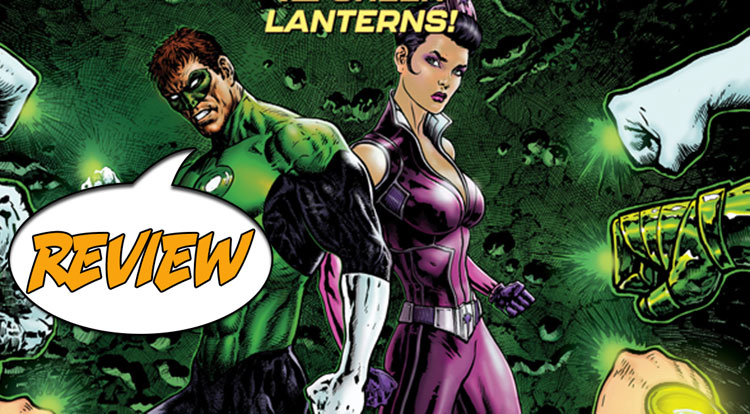 Hal Jordan’s quest for the cosmic grail comes to an end here. But, can he and the other Green Lanterns of The Multiverse survive the journey? And is what they search for truly what they hope it to be. Your Major Spoilers review awaits! Previously in The Green Lantern: What originally started as a little bit of a vacation for Hal, has transformed into a full blown, life or death situation for the multiverse. With the threat of The Qwa-Man still out there and evidence of Blackstar meddling, Hal has teamed up with other Green Lanterns from across the Multiverse to find something called The Cosmic Grail. Their quest has taken them to the forbidden Earth-15 and face to face with The Golden Lantern. Elsewhere, The Superwatch is fighting for its life against an anti-matter being that has already taken out a good number of their roster.

The Green Lantern #11 starts out with a group from the Green Lantern Corps investigating a destroyed planet. While there they come face to face with none other than Sinestro himself and he comes with a dire message for the GLs.  Back on Earth-15, Hal and Bat-Lantern struggle to sustain their fallen comrade.  Once they manage to do that, they demand answers from The Golden Lantern. He goes on to explain that he belonged to a race that had come to the planet long ago, but during their excursion he was left behind, alone. He managed to come across an old Controller ship and began to use the technology to reach out and snatch Green Lanterns from across the multiverse in order to form an army to embark on a crusade.  He then snatches up all the green lanterns present, save for Hal Jordan, who is rescued at the last second by Star Sapphire. The two have a little heart to heart and it’s revealed she’s actually a Carol Ferris from a different universe. We then jump over to Universe-0 where the remnants of Superwatch is joined by members of the GLC.  The anti-matter being reveals itself and speaks, claiming to be “border patrol” and in search of The Qwa-Man and Sinestro. On Earth-15 Hal and Carol confront The Golden Lantern.  With the rest of the Green Lanterns, brainwashed, coming for them the duo spring their plan. Using The Living Lantern’s staff, Carol conjures up the spirit of The Golden Lantern’s lost love. It’s then revealed that he is a mad, quixotic, and confused man, prone to delusions of grandeur.  The Golden Lantern is then arrested and everyone takes a moment to recite their respective oath and celebrate.  Elsewhere though, Sinestro and the other GLs are in a losing fight with The Qwa-Man.

FINALLY, WHAT I WAS WAITING FOR

When I first heard that Grant Morrison was taking over on Green Lantern I was cautiously excited for what he was going to bring to the title. I was expecting deep cuts, wackiness, mind-bending narratives, and convolution.  But, for the most part, this series has been relatively subdued, feeling more like a procedural rather than the interconnected story that I expected. That is, up until this last story arc. It’s as if someone finally looked away and Grant was able to be as crazy as he wanted to be. This issue has everything: Obscure references, call-backs to other Grand Morrison series (that very few people have read), and characters plucked from the darkest depths of days gone by. Unfortunately, it doesn’t feel especially well done. None of the various pieces in this issue feel necessary. It comes across more as if there was a basic story that wanted to be told and Grant just slotted in various pieces to complete that with the only qualification being that he remembered who these characters were. Now, the core story is actually pretty interesting.  The reveal at the end of the big bad being a cosmic Don Quixote felt well done and original. Also, the way all the Green Lanterns have interacted with each other has been a treat, especially Hal and Bat-Lantern. Another nice touch is in her universe this issue’s Carol acts more like Hal, so when the two meet there interaction is really fun.

I’ve always felt that Liam Sharp is one of those “love him or hate him” artists. I typically am a fan of his work and I think he’s in fine form here.  Liam seems much more interested in conveying a feeling rather than adhering to any sense of realistic body proportions or facial limitations. For example: The Golden Lantern comes off as imposing and stately at the beginning of the issue, with hard, stern, facial expressions that look like they’re carved. Yet, by the end of the issue when the truth about him is revealed, his body seems to droop and almost drip off his skeleton.  Steve Oliff’s colors really add to this issue by being vibrant and other-worldly without seeming garish. Just a quick note, I was surprised by how little the color green is actually in this book, good or bad, it just seemed noteworthy.

There’s a lot of stuff happening in this issue, both in the writing and visually and at times it becomes a little overwhelming. I had to read this issue a few times through.  There’s no wasted space or plot. It’s a dialogue heavy book that covers a lot of ground, and everything that isn’t covered by dialogue is done with art. A few times I thought that things didn’t make sense or came out of nowhere, but when I gave it another look I would see that it is established either with a short line of dialogue or an almost hidden detail in the panel.  With this being the penultimate issue of the series, it also pulls double duty of being a conclusion of the current story arc while being the bridge between all previous issues and the finale and it does an admirable job at both. 4 out of 5 stars.

The Green Lantern #11 is a book that is trying to do a lot of things all at the same time and for the most part manages to do it effectively. It’s also the first time we’re seeing just what creators like Grant Morrison and Liam Sharp can do with Green Lantern, a property that has been in a bit of a creative rut for awhile.