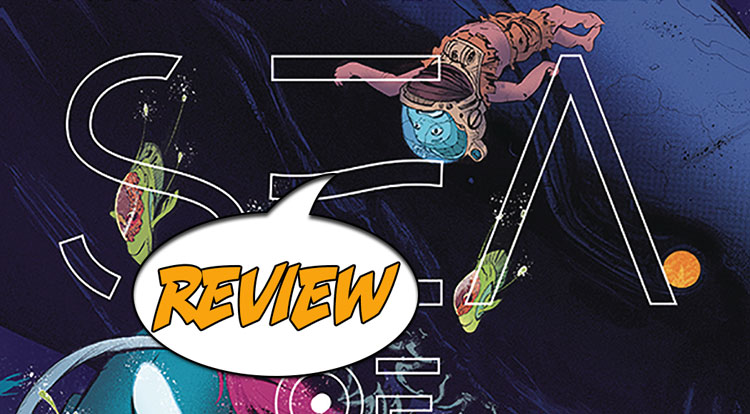 Kadyn and his dad Gill have both survived in space…so far. But what is the extent of Kadyn’s magical powers, and who is the mysterious alien who follows him? Find out in Sea of Stars #3! Previously in Sea of Stars: After the space leviathan destroys Gil’s ship, it swallows him whole. He manages to get himself thrown up and blows up the creature before engaging his emergency life support and trying to locate Kadyn. As luck would have it, there is a spacecraft nearby, and he has enough fuel in his suit to get there. The ship’s life support kicks in, and he plugs in his pack to recharge before getting attacked by a giant plant and a small guard drone. Meanwhile, Kadyn is having the time of his life swimming around in space accompanied by two scavengers.

Whatever happened to Kadyn is truly remarkable, as we see immediately in Sea of Stars #3 where he’s having the time of his life in space doing whatever he wants. The scavengers (a monkey-like creature and a whale-like creature) have mixed feelings about this. He’s doing amazing things, impossible things, things that should kill him. But it’s also rather creepy and he doesn’t seem to know the extent of his own power. Kadyn is still a young kid. We’re innately sympathetic to his plight, but he can be kind of brat as well, with the self-centeredness that the very young have at moments.

Kadyn quickly gets bored and decides he wants to see a Quarkshark. The monkey and whale try to dissuade him, but he calls out for one, demonstrating yet another impossible power. And sure enough, a Quarkshark arrives. They have a rather terrifying game of tag. Or hide and seek. Or “giant predator goes after tiny prey.” It turns out Kadyn is resistant to Quarkshark bites as well, which is impressive and even more dangerous. Do you really want god-like powers in the hands of a six-year-old?

Then it’s back to poor Gil, who has fired up the ship’s hyperdrive and is hurtling through space. Eventually he crash-lands on a planet where the guard-drone (now named Kyle) claims it’s now authorized to use extreme force on him. Meanwhile, his suit warns him that the atmosphere is toxic, and he needs to find oxygen. As luck would have it, the giant plant grabs him. Instinctively biting it, he finds out it is full of oxygen.

The alien from the end of last issue catches up with Kadyn. The scavengers recognize him as being a Zzaztek, who is someone to be feared. But he claims not only that he means no harm, but that he knows what’s going on with Kadyn. The young human is the protector of the Zzaztek people and is the mightiest god in all the heavens.

Gil gets his suit patched up and affixes a plant to it. He pulls Kyle free, who promptly tasers him. He sets out onto the planet only to have an arrow shot at him. Kyle identifies it as a Zzaztek arrow – an interesting coincidence.

Sea of Stars #3 embraces the alienness of this part of the galaxy. Even though many of the things we see have some inspiration from Earth, the art picks out some strange and wonderful creatures that seem somehow appropriate in space. I particularly like the opening panel with jellyfish-like beings. They seem plausible as space creatures. The different planets or planetoids that Kadyn visits have their own color palettes, and often have strong shadows. It’s a terrific look.

Gil’s scenes are equally amazing. From the battered tech of the ship he crashes and his own beat up suit, to the wild growth of the giant plant, to the exterior shots of the Zzaztek planet, it is all a treat to the eyes. In particular, the planet has a stunning color palette with a teal sky and raspberry red water.

I’d also like to recognize the fine lettering work. The use of multiple fonts is quite clever, and it helps keep things clear such as on the crashed ship where there are different speakers – Gil, Kyle, and life support – talking at the same time but not conversing with each other. The scavengers have a subtly different font, as does the Zzaztek. And I love the use of another font and white on black to designate Gil’s thoughts. His thoughts run rather dark, and the reverse coloring echoes that.

Sea of Stars #3 has an interesting take on the idea of being lost in space with half the story being one of survival in adversity and half being utter fantasy. This lets the story have a serious backbone but gives us moments of sheer joy or even craziness to relieve the tension.  I think it adds an interesting twist to the trope of searching for the lost child when the child is suddenly quite self-sufficient.

Has young Kadyn actually become a god? And will Gil ever be able to catch up with him?