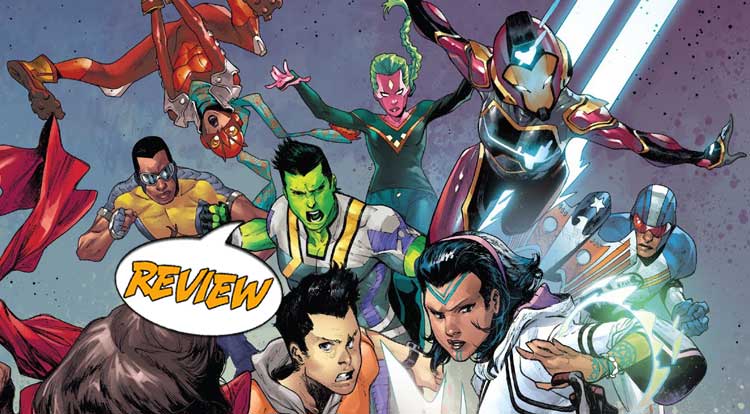 The Champions are going global!  Your Major Spoilers review of Champions #1 awaits! Previously in Champions: The Champions have gone global! The team has seen explosive growth under Ms. Marvel’s leadership, with super-powered members ready to answer the call in a dozen different countries. They’re saving people and improving lives across the planet while they inspire the next generation… but something sinister lurks beneath the surface of their expanded mission. It’s a dark secret that could destroy the team and everything they stand for!

We open with Ms. Marvel’s first mission as full-time Champions team leader…  or rather, her first missions.  One team (consisting of Snowguard, Locust, Bombshell, The Falcon and Pinpoint a teleporter) take on human traffickers in Mexico, while another (Ironheart, Power Man, The Patriot and The Wasp) deal with a tsunami in Japan as the third team (Viv Vision, Spider-Man, Brawn and Ms. Marvel herself) deal with Zzaxx, a real heavy-hitter.  All three teams are successful in their superheroing, but once they reconvene to debrief, things start coming apart.  Sam Alexander, the former Nova and current team pilot, is still unhappy about losing his powers, Ironheart is uncomfortable after Viv kissed her last issue, Ms. Marvel is too focused on her logistics to notice her friends fighting.  As for Miles Morales, he’s distant and angry throughout the entire mission until we discover on the last page why, as he is visited by… Mephisto?

I *LOVE* A BIG TEAM ROSTER

As a fan of teenage super-teams like The New Warriors and the Legion of Super-Heroes, I’m 100% onboard with the expanded roster, especially since it’s using characters like the new Falcon, the new Patriot and Power Man, who have been discarded by the creators who introduced them in their regular books.  Add in The Locust, whom I wholeheartedly love for ‘El Chavo del Ocho’ reasons, and Champions #1 is entirely my jam.  I was a little disappointed in the decision to focus mostly on the original Champions (though the double-page spread of them leaping into action together is stunning), but I also realize that with a team of fifteen and more members explicitly mentioned as being in reserve, that Zub has to keep a lot of plates spinning, so continuing the threads of the previous book seems smart.  The awkwardness and confusion of adolescence is well-done in these pages, including Ms. Marvel’s assessments of her new teammates, but frankly, the hardest part is going to be keeping the naming conventions right, as Wasp, Spider-Man and Falcon share their names with their older counterparts.

Steven Cummings’ art is one of the big draws in this relaunch, delivering really strong emotions in facial expressions, making the action sequences work and even doing a great job with Riri Williams’ armor and hair, something that previous artists have had some issues with.  In short, Champions #1 has a ton of moving parts and story elements that stay mostly balanced, with expressive and attractive art and coloring, making for an impressive 4 out of 5 stars overall.  If these creators can keep the size and scope of this team in focus and balance all the various personalities, I’d be happy to see this comic run as long as New Warriors did.

Big dreams, a bigger roster and a lot of interpersonal drama make for a fun read, but one that feels almost too short.