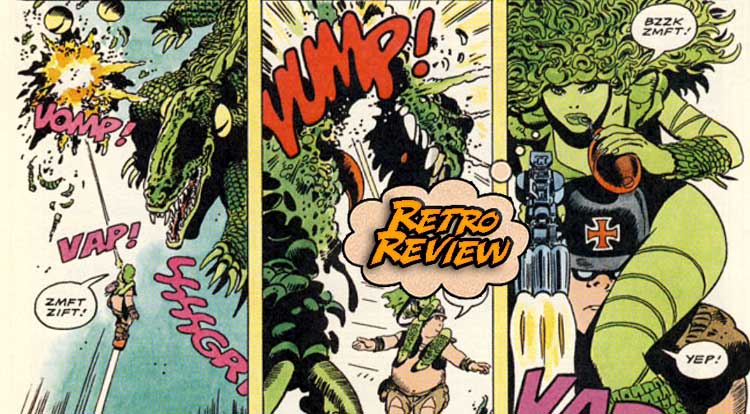 Previously in Ribit!:  Breaking into comics in 1948, Frank Thorne quickly made a name for himself in the romance comic field.  He worked for years at Dell Comics on dozens of licensed properties as well as syndicated comic strips before ending up at Marvel Comics as the primary penciler of Red Sonja, a spinoff of Conan the Barbarian.  After that, he seemingly found his niche, creating his own lady warrior, Ghita of Alizzar and working mostly in the field of swords and sorcery, with a strong underpinning of erotica.

We open with a man (?) called Thog, roaring across the desert in his conveyence, seemingly a mechanical dragon beast called the Hooter, rushing home to meet his beloved.  In just a couple of pages we are introduced to his whole world, a place where sorcerers are grudgingly giving up ground to the new magic, a strange practice called “science”.  Once he’s home, he greets his lizard-pet-friend Ribit and delivers news to his sorceress mistress about her enemy.  Having completed his duties, Thog climbs down into his hidden lair to greet his beloved.  But first, he has to put her tape in the VCR and press ‘Play.’ At the stroke of midnight, Thog and Ribit return to sorceress Sahtee’s lair, where her cauldron is already full and bubbling with some sort of mystical madness, and I have to say: These few pages were enough to hook me on this book.  Thorne’s layouts are worth the price of admission almost by themeselves, even when $1.95 would buy three big corporate Marvel or DC books, and each page is full to the brim with details both silly and ingenious.  Sahtee requests that Thog choose the form of the warrior they will create, the one that will doom her rival once and for all, and he knows exactly what the destroyer should look like.

But first, he has to fetch the videotape… With his best friend and companion transformed into the woman of his dreams, Thog is thrilled when Sahtee agrees to let her stay as she is, even summoning her familiars to clothe the little green bantam woman.  (Any resemblance to Red Sonja is almost certainly intentional, and kind of cute to boot.)  Before they can complete the spell again, though, Sahtee’s rival, Vomick, begins an assault!  Fortunately, Ribit is confident that her accident is more than just cruel fate. Thog and Ribit take to the fields on his skateboard (because 1989, natch) and she proves herself more than capable of handling combat, using grenade and automatic rifle to take out the first wave of attacking horrors all by herself (with a tiny assist from her barbarian pal.) As the issue ends (a bit abruptly, to be honest), Ribit grabs one of Vomick’s mechanical hell-hounds and vows to ride it back to it’s controller and take out her enemy once and for all.  as Thog shouts for her to return.  Ribit! #1 is the first of a four-part story as presented (I suspect it was created as one big album, especially given how abrupt this one ends) and it remains as impressive a work now as it did when I discovered it in college, with phenomenal art and a cute story that does a lot of things right, earning 4.5 out of 5 stars overall.  If you’re a fan of ‘Heavy Metal’ or Thorne’s art on ‘Red Sonja’, I’d recommend fishing it out of the next back-issue bin in which you encounter it.

A beautifully drawn comic book brimming with enthusiasm and ideas, with just enough whimsy to keep it balanced and a perfect balance of science fiction to fantasy.