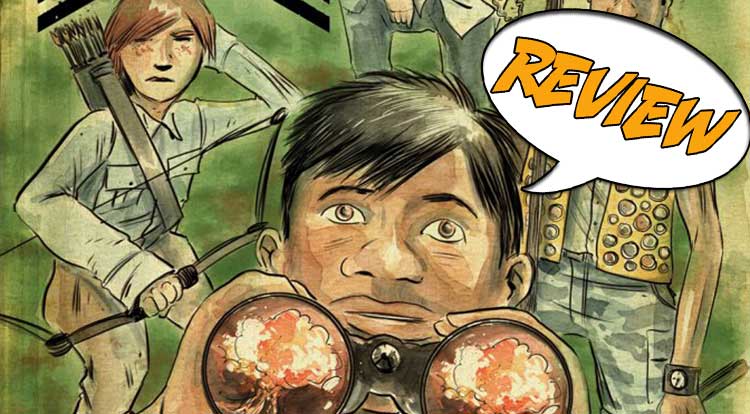 When Willy learns that there is one more Scout merit badge to earn, the mysterious Black Badge, he joins other Scouts Kenny, Cliff and Mitz on a trip to South Korea in hopes of earning it.  Join them as they venture rather further north than Willy ever dared imagine in Black Badge #1. Previously in Black Badge: No one likes the Scouts.  They dress funny, have no luck with the ladies, and are obsessed with earning badges at the expense of fun life skills.  So when the new guy, and the only Scout to earn every badge in existence, Willy, joins a trio of scouts on a trip to South Korea, he learns the truth about what it takes to earn the Black Badge.

21 Jump Street for the 21st Century

Your reviewer isn’t sure how it works in the States, but here in Australia, you have to join Cubs before you graduate to the Scouts.  Back in 1980, I spent a year as a Cub, dibbing and dobbing to my heart’s content with a group of friends in my local group.  The wildest thing we did was stay overnight in the next town over, going for a night walk and telling ghost stories around a bonfire while toasting marshmallows.  Yes, it was that clichéd.  But it was a great deal of fun.

Against the events in Black Badge #1, my little hike in the outback pales into insignificance.  The issue opens idyllically on a riverbank in South Korea, with cherry blossoms blooming and boats punting across the water.  A diverse group of four Scouts are introduced – Kenny, Cliff, Mitz and Willy, who are treated with some derision by the leader of the school group they have attached themselves too.  Cliff, the apparent leader, ignores the niggling, and soon enough the scouts grab a canoe and are rowing down the river.  As the sun begins to set, new boy Willy comments that they have rowed quite a distance north.

Which wouldn’t ordinarily be a problem, but when your starting point is South Korea, going far enough north is guaranteed to cause trouble.  And as surely as night follows day, the group cut through a fence and have bedded down for the night, with Willy obsessing over the likelihood they are on the verge of being captured and facing execution for trespassing.

Writer and co-creator of Black Badge #1 Matt Kindt, crafts a clever tale of misdirection.  While it soon becomes apparent exactly what’s going on, the way the plot unravels as Willy begins to recognize his predicament is entertaining, and the payoff is very satisfying.  Kindt gives the old hands – Cliff, Mitz and Kenny a world-weariness beyond their years that contrasts nicely with Willy’s increasing panic and then fatalism as the reality of what he has signed on for, with his father’s approval, sinks in.  When a drone drops the missile on an isolated North Korean camp, Willy’s, and our illusions are shattered.

Willy is our viewpoint character, a dedicated Scout and someone keen to do the right thing in the service of the right cause.  Kindt crafts a chilling flashback scene that demonstrates Willy’s grit and belief in those giving the orders, as he swims through a series of underwater tunnels to earn his scuba diving badge.  Even at the moment of maximum peril, his faith in the Scout leaders sees him through to the end.

The artwork in Black Badge #1 by Tyler Jenkins isn’t hyper-realistic.  It’s loose enough that it verges on caricature, but not to the point where the characters are unrecognizable.  It is distinctive and brings with it a certain amount of power.  Compositions are expertly rendered, and panel layout briskly moves the story along.  There is some excellent use of light and shade in the camping scene and colorist Hilary Jenkins brings a subdued palette that matches the tone of the story.

Story-wise, there’s little in the way of fireworks here.  Willy’s more experienced comrades shoulder a world-weary burden, having lost a comrade and waiting for Willy to prove himself.  While the twist to the story isn’t original, it’s still an intriguing premise that is only really hinted at in this opening issue.  Mission accomplished, for now, but further intrigue and revelations await in future issues.