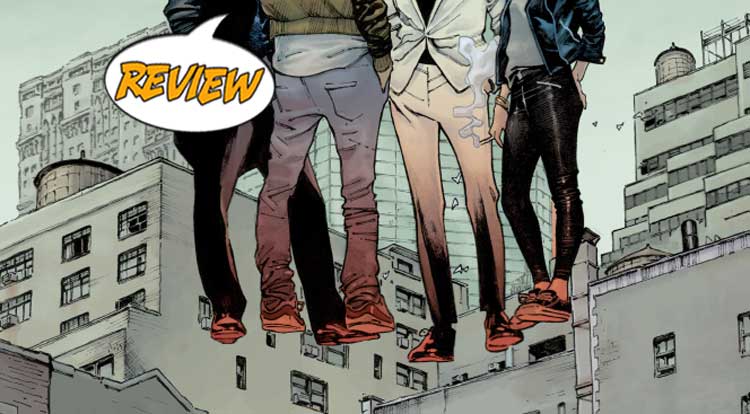 There is a secret fraternity, consisting of magic-users whose job it is to make sure that nothing goes bump in their night.  But now, they are the ones being targeted…  Your Major Spoilers review of The Magic Order #1 awaits! Previously in The Magic Order:  If you’ve never seen a monster up-close, The Magic Order is the reason why.  Tasked with protecting reality from things beyond the pale, they are the thin glowing line between reality and chaos.  Now, someone has begun targeting that last five families of The Order, forcing the magic-users to defend not only our sanity, but themselves.  How can you hold off the darkness when the very darkness is out to get you?

WHICH MARK MILLAR WILL WE GET?

This issue opens with one of the most disturbing sequences in recent memory, as a pair of sorcerers floating in the night pull off an assassination by possessing a small child to take a huge carving knife and murder his parents.  It’s a shocking open (and one that almost persuaded me not to read the comic after it was the entirety of the preview pages), throwing us right into a world of magic without so much as a chocolate frog joke.  The story then takes us on a series of vignettes introducing us to the Moonstone family: Cordelia, the irresponsible young woman who just got arrested at a kid’s birthday party; Leonard, the old-school stage magician and patriarch; Regan, who runs his nightclub and works as his father’s right-hand man; and Gabriel, who has entirely given up magic.  At the funeral, we discover that the murdered dad was part of their Magic Order and that his assassin is suspected to by one Madame Albany, a former member of the Magic Order with big plans…

This is one beautiful comic, my friends.  Every page is full of shadows and mist and atmosphere, and Coipel’s pencils even make Cordelia being handcuffed in the back of a police car seem somehow unearthly and intriguing.  I love the use of color in these pages, too, with a blue-gray haze at the funeral, bright reds for the opening death scene, and muted earth-tones for Gabriel’s mundane life without magic.  Even the fact that Gabriel’s motivation for leaving the Order is the loss of a child (a plot-point that can be an issue for me, if mishandled) doesn’t throw me out of the story, and the final sequence of another sorcerer getting killed with a horrific thunderbolt of a final page guarantees the book ends on a high note.  I’m always a little leery of Mark Millar comics as a reader, because so much of his work draws you in with compelling characters and bits of dramatic business, then crosses the center line with over-the-top violence, caricatured villains and heads a’sploding, but The Magic Order #1 shows appropriate restraint.  The moments of violence are motivated by the story and even the opening murder serves to underline the severity of the threat that the Moonstones are about to face…

Long story short?  Picking up this comic book will likely lead to an engaging read for you, as The Magic Order #1 combines a story that makes new things out of some familiar tropes (there are echoes of J.K. Rowling here, as well as other pop culture references, like the very name “Moonstone”) with some really wonderful art, earning 4 out of 5 stars overall.  I’m definitely coming back next issue, and look forward to seeing this whole story play out…