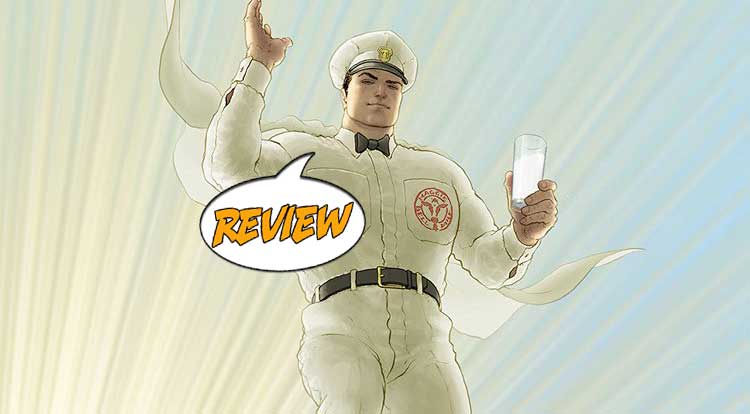 Previously in Justice League Of America/Doom Patrol Special: “’MILK WARS’ part one! Welcome to the un-event of the year!  Kicking off a line-wide adventure, DC’s Young Animal collides with the DC Universe to bring you a different kind of crossover.”

MANGA KHAN IS BACK!

The opening sequence of this issue makes me very happy, as we see the button-down psychos of Retconn meeting with their newest client, a creature who seems to have a little too much joy in their nefarious plan… Lord Manga Khan!  (If you don’t know who Manga Khan is, just know that he battled the JLI back in the day and leave me to my giggling.)  Their plan unfolds in Happy Harbor, where Milkman Man (who bears a strong resemblance to a certain Kryptonian) is making his daily horrible rounds…  It’s bad, you guys.  But, it also leads to the arrival of Casey Brinke and The Doom Patrol, who do not fit into the newly retconned boring fifties utopia that Happy Harbor has become.  It quickly becomes clear, though, that Superman/Milkman Man isn’t the only one who has been altered, as the entire Justice League Of America is present, from Neighborhood Watch honcho Karl Kobo to the nice housewives that used to be Black Canary, Vixen and Killer Frost.  The entire JLA has been transformed into the Community League Of Rhode Island, and they’re ready to thrown down with the interlopers…

It’s a weirdly meta take, especially when we find that Milkman Man isn’t actually our Superman, but a duplicate, as Superman himself is seemingly immune to the manipulations of Retconn due to his proximity to his “symbolic lineage” of the God of Superheroes, but the story takes an even more existential turn when Crazy Jane channels the comics of our universe to scare the JLA back to themselves.  (I even appreciate the fact that the stories being reference have almost all themselves been retconned away, with the sole exception being the first appearance of Killer Frost in the New 52.)  Most amazingly, the writing team manages to keep everyone in character with their own books, which is the hardest part of this kind of crossover.  There’s something wonderful about reading the monologue of Killer Frost and feeling like it’s clearly the same character from Orlando’s JLA while Crazy Jane feels like the same character seen in Doom Patrol.

In short (or not for long), this is a really fun first salvo, featuring a lot of great stuff and making me excited for the rest of the big Young Animal/DCU crossover and what other delights might be in store for us.  Just the concept of the Milk Wars hits a sweet spot for me, but Justice League Of America/Doom Patrol Special #1 is an excellent comic in terms of art, story and celebration of wild weirdness, earning 4.5 out of 5 stars overall.  There’s even a backup story featuring the origin of the Formless Girl, who is almost certain to be important in coming issues…