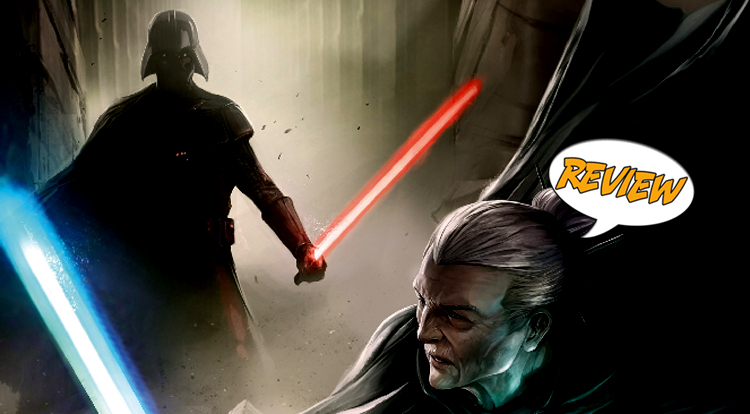 It’s ‘Revenge Of The Prequels’ as Darth Vader faces the most terrifying force in the universe: An angry librarian!  Your Major Spoilers review of Darth Vader #10 awaits! Previously in Darth Vader: “Vader’s showdown with Jocasta Nu comes to a startling conclusion!  What secret information has the Jedi librarian risked her life to protect?  And can she stop Vader from getting it?”

DON’T BE AFRAID OF THE PREQUELS

This issue takes place soon after the implementation of Order 66, in a universe where the newly crowned Emperor Palpatine is solidifying his command.  I was a little leery of this fact until I realized who the creative team was, and this issue made my faith justified.  We open in mid-combat, as Jedi archivist Jocasta Nu (the “if the planet isn’t in my archive, it doesn’t exist” lady from ‘Attack Of The Clones’) is confronted by Vader himself after successfully making her way into the archive on Coruscant.  Master Nu holds off the scariest cyborg alive with secret Force weaponry, even taunting him with her knowledge of his true identity as “little boy” Anakin Skywalker, a moment that is almost as much fun as seeing Yoda open up the can of whoop-ass on Count Dooku,  Amazingly, when all seems lost, Vader extinguishes his lightsaber and tells her that she will not be harmed, but Jocasta isn’t buying.  Jumping out a window (!!) into a squad of Troopers and igniting her own saber…

I have to say, I love this issue to death.  There’s an intensity to these events that pushes it far past just another story that takes place in between two movies we’ve already seen.  Jedi Master Nu is frighteningly skilled and powerful, and seeing a young Vader in action is interesting.  Best of all, Soule manages to convey that Vader is conflicted without betraying the idea that he’s an implacable force behind a shiny black mask, giving us a look into his mind without blunting his menace.  This is true, terrible Darth Vader that echoes his terrifying murder-spree from the end of ‘Rogue One’ but still ties into the conflicted young man of the prequels and presages his eventual redemption arc at the end of ‘Return Of The Jedi.’  Camuncoli and Orlandini give the proceedings a strong visual presence and the action sequences are stunning, making for an engaging issue…

The difficulty of a comic book starring Darth Vader is that the iconic presence of Darth Vader as glowing cyborg monster making breathing noises in the dark can be undermined by having him as the central figure.  Half the fun is in not knowing what’s going on behind those shiny black eye-shields, making Darth Vader #10 even more impressive, delivering a reading experience that’s continuity-driven but not convoluted, visually stunning and overall impressive, earning 4.5 out of 5 stars overall.  I kinda want to read more of Jedi Master Jocasta Nu now…