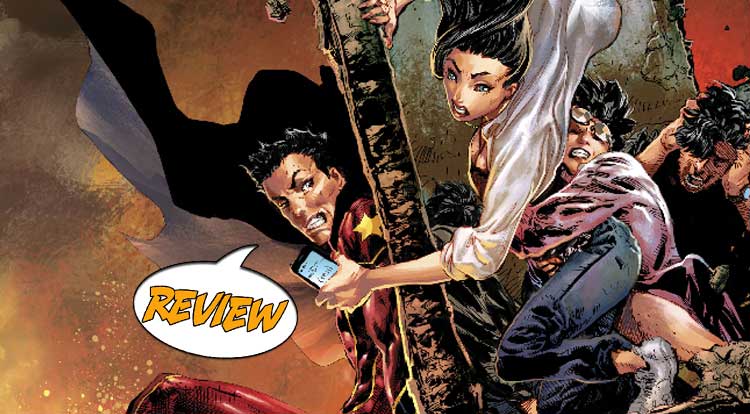 As the Justice League of China prepares for a new era next issue, Laney Lan takes the stage as she weighs the consequences of journalism on our hero…  and herself.  Your Major Spoilers review of New Super-Man #19 awaits! Previously in New Super-Man: “‘A Day in the Life!’  The New Super-Man and Justice League of China changed the metahuman landscape of China forever, and Laney Lan has reported on their heroics since day one.  But there’s more to Shanghai’s ace reporter than meets the eye, and when faced with turmoil in her own family,  Laney’s commitment to reporting the truth will be tested like never before.”

A CHANGE OF PERSPECTIVE

We open this issue a few weeks into the New Super-Man’s superhero career (I have to admit I’m not clear if that means it’s taking place in the story’s relative past or not) as Laney Lan tries to get to the bottom of the Super-Man’s secrets while dealing with the insistence of her boss that she focus on silly lifestyle puff-pieces.  An interaction with Super-Man and Bat-Man leads to them taking lunch with her, during which our inexperienced young Super-Man tells her things he really shouldn’t and Laney argues whether or not to tell him the truth about his mother.  There’s a couple of small sequences of action throughout this issue, but the bulk of the issue is about Laney and her own father and his hidden secrets.  With the title change to “New Super-Man and The Justice League of China” in #20, this serves as a lovely breather issue full of character and nuance, preparing for what could be a major change in status quo to come…

Seeing such depth and real emotion attached to the character of Laney Lan, who has popped up here and there as a seemingly flat hip, young reporter type is amazing, and I’m happy to say that the different creative team doesn’t mean that this issue is missing any of the usual great New Super-Man stuff.  As one of DC’s most quietly brilliant titles, I was worried that not having Yang would mean that this issue felt wrong, but it’s really lovely, delving into Laney and Kenan’s secrets without feeling like filler or marching in place.  The art is likewise very good, with Batman eating noodles while trying to shush his partner being just as exciting as their battle with a giant robot, an exceptional achievement.

All in all, this is a great comic book and this issue reminds me that you should be reading it, as it delves into part of the DC Universe that no one else ever has, and does so with creativity, heart and a tone of fascinating character.  New Super-Man #19 is a book in the vein of the ‘Hawkeye writes home’ episodes of M*A*S*H, hearkening back to a time when whole issues would be devoted to the X-Men playing softball, and it works on both visual and story leveled, earning 4 out of 5 stars overall.  There’s one thing I want you to remember, Faithful Spoilerites: You should be reading this comic book…

Laney Lan isn't Lois Lane, but she's just as fascinating, and this issue makes that clear. It's a winner.