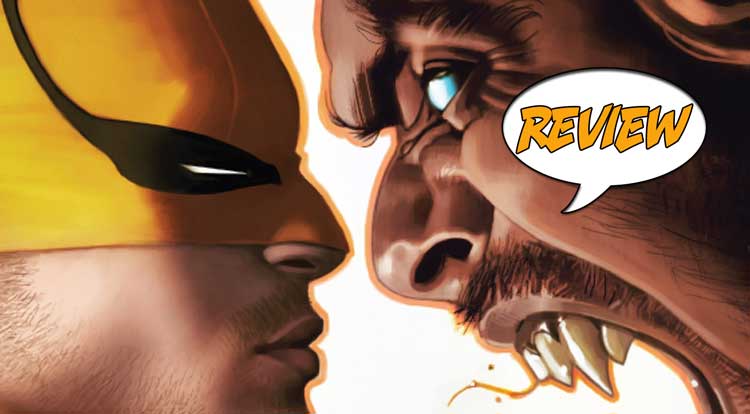 So, did I pick this book solely because of the novelty of finally reviewing a book with a number above 50 on the cover?  Maybe, maybe not.  But either way, Sabretooth is back to help out his first superhero foe…  Your Major Spoilers review of Iron Fist #73 awaits! Previously in Iron Fist: “Recently, Danny Rand was brought to Lui-Shi to fight the island’s seven masters in a kung fu tournament.  Though a man named Choshin was using the contest as a way to defeat Iron Fist and take over L’un-Lun, Danny emerged victorious.  Now, after a long, perilous journey, Danny is on his way back to New York City…

We open in the hidden underground prison on the island of Lui-Shi, where Choshin is being held after his loss to Iron Fist, just in time for his friends to bust him out.  Of course, Choshin being the guy that he is, he immediately murders one of his saviors (the entertainingly named Long-Armed Bull) in order to…  Actually, I’m not sure why, the story isn’t 100% clear on the whys, just that Choshin absorbs his chi to power his own, leaving the Bull for dead.  He sets off to find Iron Fist, who has arrived home to his New York apartment, where he is keeping Shou-Lao The Undying (the immortal dragon from whom he got his distinct burn/scar/tattoo thingy) encased in glass, a move that is written off as clever but is clearly (from a reader’s perspective) really dumb.  Discovering that his home has been broken into, Iron Fist suddenly takes off to find Sabretooth, causing a running fight that destroys the bar they’re in, with Iron Fist trying to get Sabretooth to look at an image from the security film.  Once they’ve burned out their macho instincts, Sabretooth finally looks, and is stunned to see that the footage shows a man he knows to be dead: The Constrictor!

My biggest problem with this reveal is that The Constrictor is not particularly frightening, and certainly shouldn’t carry enough weight to terrify the Living Weapon and the Ersatz Wolverine this much.  That aside, though, this issue’s running battle reminds me of X-Men #183, where Juggernaut and Colossus fight it out in a bar as punishment from Wolverine; sadly, this issue fails that precedent on a number of levels.  The storytelling in the art is really hard to follow throughout the issue, so the battle doesn’t feel kinetic or exciting, with Sabretooth’s new pseudo-good guy status, there’s little reason for them to beat one another up like this (other than “because it looks pretty cool”, which would be a stronger argument with stronger art), and most of all, Danny Rand comes off as a feckless doofus throughout the issue.  Aside from the issues with understanding what’s going on in the art (Choshin’s initial strike at Long-Armed Bull isn’t actually clearly a strike, for instance), the characters all have the same bland, menacing tone and dialogue, and even when Iron Fist is trying to heroically limit damage to innocents and/or the bar, focusing on smacking Sabretooth seems to be a higher priority…

THE BOTTOM LINE: I ALWAYS HATE IT WHEN THE TRY TO MAKE SABRETOOTH HAPPEN

All in all, I’m dissatisfied with this book on a number of levels, as I had to read a couple of times to make sense of the art, and even then, I’ve had to make some assumptions about what the creators seem to be conveying.  Iron Fist #73 isn’t an overtly bad comic book, but it’s got some fundamental problems that are hard to ignore, earning a slightly below average 2 out of 5 stars overall.  The three-page backup story/advertisement for The Defenders (featuring Mark Bagley’s art) amplifies the weaknesses of the issue even more, which is something of a shame.  Next issue is actually going to deliver the team-up this one promised, it will be worth seeing if that brings things up a notch…