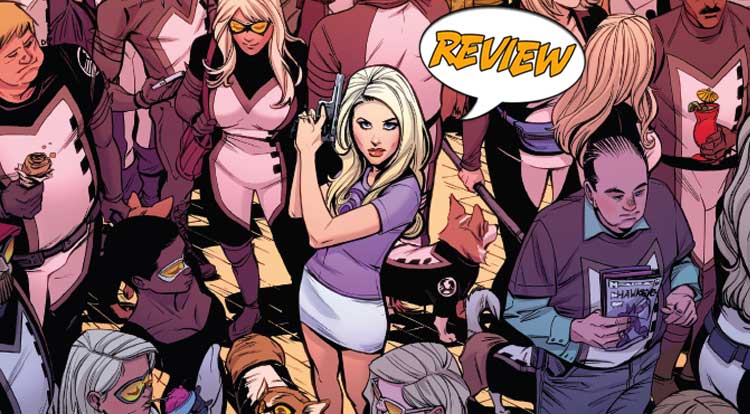 Bobbi Morse takes to the high seas on a relaxing cruise…

Previously in Mockingbird #6: After a grueling adventure involving zombies and telekinetic powers, Bobbi Morse might have wished for a break.  She didn’t get it, as her former husband, Hawkeye, killed Bruce Banner (admittedly at the latter’s request) and threw the entire superhero community into disarray.  That’s when the cruise tickets arrived…

This issue, like the previous ones, is a little bit more than just your straightforward comic book tale.  Beginning from the title page, we are given a very metatextual look into Bobbi Morse’s life and mind, one which reminds me quite a bit of my beloved Fraction/Aja ‘Hawkeye’ run not so long ago.  In order to take her mind of her ex-husband’s murder trial, Bobbi has agreed to take a “Nerd Cruise” through the Bermuda Triangle, and from the very first page, this issue manages to be referential and funny at the same time.  Bobbi’s contact and mysterious benefactor is a man in a horse-head mask (one of dozens on the ship) who wants to giver her some important information about Clint’s trial, but hasn’t quite mastered the ways of spycraft.  The cruise is complicated by role-playing games, a disgusting public pool and the presence of an old spy comrade, Lance Hunter…

THE SYNERGY OF HUNTER

Though part of me is cynical about the addition of Mockingbird’s TV boyfriend to her comic, it makes sense to have him as part of her book, and his appearance this issue is a big part of the fun.  The underlying sexual tension makes for a couple of great jokes and at least one perfect visual gag, and his cover as a Corgi enthusiast means that there’s a cute little dog in the midst of all the sneakery.  Niemczyk’s art is beautiful throughout the issue, and I particularly enjoy Mockingbird’s wardrobe changes to stay undercover, including a ball gown to play some D&D.  Add in Cain’s wry version of Bobbi, with wonderfully witty dialogue, and you’ve got a recipe for something truly above and beyond.  Indeed, the worst part of this book is the realization that, like Fraction’s Hawkeye, DeConnick’s Captain Marvel or Snyder’s Batman, you’re reading a take that you want to be the character forever, but is inextricably tied to this creative team and will probably disappear when they move on…

All in all, there are worse problems to have than liking a book’s take too much, and this issue makes it worth any worries that it can’t last in sheer quality, leaving Mockingbird #6 with a close-to-perfect 4.5 out of 5 stars overall.  If you haven’t checked this book out yet, I highly recommend it, especially if you’re a fan of spy stuff, clever superheroes and/or wonderfully rendered (in terms of both art and story) female heroes.

Complex storytelling, lovely art and a charismatic hero. What's not to like?