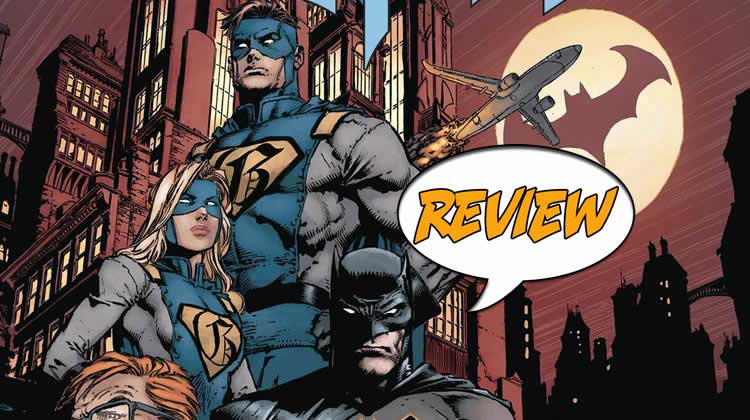 As I was reading this comic, it dawned on me that if it had come from Marvel, it would have been called the “All-New, All-Different Batman #1!” However, since it was from DC, it was more succinctly called Batman #1.

The new team launches the monthly title. They have huge shoes to fill, so how did they do?

Previously in BATMAN: REBIRTH: “I AM GOTHAM” chapter one. No one has ever stopped the Caped Crusader. Not The Joker. Not Two-Face. Not even the entire Justice League. But how does Batman confront a new hero who wants to save the city from the Dark Knight? CAN’T MISS: Superstar artist David Finch returns to Batman alongside writer Tom King for this five-part storyline.

A MERE MORTAL AMONG SUPERHEROES

It was good to see Batman back in familiar territory, protecting Gotham, meeting Commissioner Gordon on the rooftop, working with Alfred, etc. He even has a cool Batmobile to drive, and it resembles the original Batmobile from Batman: The Animated Series. I really liked that!

Most of the issue is spent with the Dark Knight trying to save the city from an airplane that’s going to crash in a populated area. Batman scrambles to reach the plane before it hits the ground, and he uses two jet engines to help boost it higher when it becomes obvious that the rest of the Justice League is away and unable to help.

It comes down to Batman having to remain on the plane to make sure everyone is saved – except him! Of course, the Dark Knight is willing to sacrifice himself to save others, so he tells Alfred to let the rest of the Bat-family know of his respect for them, and even asks his butler if his parents would have been proud of him. “Is this a good death?” he asks, harkening to the Frank Miller Dark Knight Returns.

Of course, Batman survives to make it to issue #2, and in the process he meets two apparently new characters, both superpowered since they can clearly fly. The guy is named Gotham, and his female partner is called Gotham Girl. “This is our city. We are here to save it,” they tell him.

There are fun Easter Eggs, including a Robinson Bridge and a Finger Tower. I always enjoy those kinds of things!

It’s a good start, but I have to say that the biggest weakness was that it didn’t feel like Batman to me. After all, Bruce has always survived by thinking ahead, and I felt he gave up trying way too easily. For instance, they refer to the falling aircraft as a “new” Batplane, but what happened to the older versions? Instead of using two jet engines, he could have remote-controlled a Batjet to fly under the plane and save the day. Putting himself at serious risk like this just didn’t feel like the hero I’ve come to admire.

I also think that this can’t have been the first time a disaster like this has come to his attention. Batman has always hated relying on people with powers, so he must have considered that this could happen in his city and figured a way to certainly resolve this without them.

What I think this five-parter will be about is Batman’s role in a universe with superheroes. How can a man with just his brains and human brawn stand up to or work with metahumans? It’s a good question, but I would have loved to see him use those famous wits to take care of this horrible situation without help.

This isn’t the first time David Finch has drawn Batman, and his art is very strong. It’s very dramatic when the missile heads for the plane as Batman and Gordon talk. Facial expressions are all great, and the action, including the Dark Knight riding the aircraft is visually stunning.

The new costume as developed by Greg Capullo is on display as well, and Finch utilizes full-page illustrations to great effect. Well done!

BOTTOM LINE: The Man More than the Batman

In this debut issue, the focus is on the “man” part of the hero instead of the “bat.” We see just how mortal Batman is while protecting his city, and while it’s an interesting concept, it doesn’t match the hero I’ve admired for decades. I hope to get to talk with Mr. King for my podcast and ask him why he made these choices. Maybe it’s me who is way off base here!

It’s great that they get to introduce new characters into the Batman Universe, which is always quite an achievement. Will they be around for a long time? Are they other super-beings we’ve met in the past? These questions will be answered in the months ahead!

Batman once developed ways to defeat the entire Justice League, if necessary. That was quite an accomplishment, but that’s what makes him the formidable hero he is – his ability to plan ahead. That he was unable to stop a plane crash-landing without risking his life was something of a disappointment to me, but we’ll see what the team has in mind going forward.

Can a man interact with metahumans? That seems to be the question posed by this storyline.