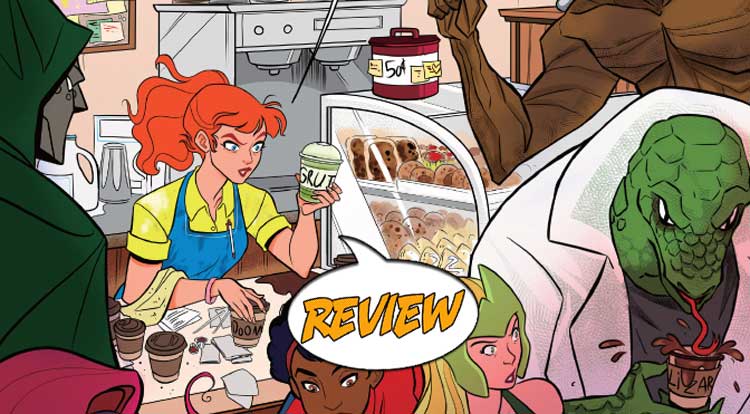 She’s got a new home, a new jobs, some new/old friends and… Previously in Patsy Walker aka Hellcat: A former Avenger and Defender, Patsy Walker hasn’t really been high on the hero charts for some time.  (Cut her some slack, she was dead for a while, that really cuts into your time.)  Now, having returned to New York, she’s trying to create a superhero temp agency, figure out her life, and also deal with some unusual changes in her always-unpredictable abilities as Hellcat.  What could possibly go wrong?

A BIT OF ROMANCE…

While dealing with the threat of an old foe from her Defenders days, Patsy made some new friends, and moved into a new building with her telekinetic pal, Ian Soo.  Of course, their first night in their cool pad is interrupted by her mystic senses and the repeated bits of… BEDBUGS!  Ewww!  Patsy immediately confronts their weird, cantankerous old landlord, only to find that the old man isn’t to be reasoned with, forcing her to take refuge in the home of an old friend…

…Doctor Strange!  I have to say, having Patsy show up and refer to him as her “old Defenders buddy” is wonderful for me, especially when the Sorcerer Supreme uses her powers to give Patsy’s senses a little boost.  She returns home, gets in a super-fight with the real villain (secretly the landlord’s super-sexy son, given powers in a strange prison experiment gone wrong) and ends with another successful client in her super-temp agency.  Job well done for Hellcat!

A BIT OF ACTION…

There’s also a cliffhanger moment where her old friend Hedy calls with some bad news, but we won’t get to that until next issue.  With the Marvel Universe of the last ten years full of darkness and angsty drama, it’s lovely to have another book that fits into a quieter, more humorous mold.  (See also: Squirrel Girl, Howard The Duck, and maybe Ms. Marvel.)  Kate Leth’s script is well-done this time around, and her dialogue is sharp, making for some of the best parts of the issue.  (“He summons bedbugs, Tom.  I’ve got standards…”)  Brittney L. Williams art is likewise wonderful, a simple-but-beautiful style that really underlines the action and fun of the script, while allowing even Doctor Strange to look arcane and powerful, without short-changing the depictions of Patsy’s apartment-dwelling normal life.

If any hero fits perfectly into the mold of “normal girl having abnormal adventures and being witty about it,” it’s Patsy Walker, known for Spider-Man style quips and meta humor all the way back to the 1970s, and featuring one of the weirdest and longest histories of anyone in Marvel Comics (one version of the character, an Archie Andrews style teen humor heroine, debuted in 1944.)  Patsy Walker aka Hellcat #3 works well as a story, makes me remember how much I like the character, and also gives her new and interesting things and people to interact with, earning a very impressive 4 out of 5 stars overall.  Even if you haven’t ever read a Patsy Walker story, this one will make you want to track them all down…

Patsy's adventures are entertaining and fun, and her positive attitude is infectious. (Big bonus points for not ignoring her decades-long backstory!)