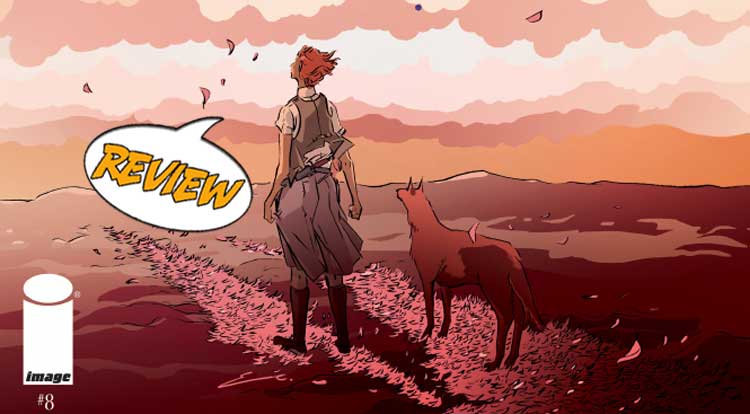 Previously in Pretty Deadly: “The Ballad was a history.  With Death’s daughter Ginny at her side, Sissy, the child of blood and violence raised on love, defeated Old Death in his own domain and took his place in the long fallow World Garden.  There, her work has only just begun.  Having assumed the mantle of Death herself, Sissy must bring the Garden back to life…  and seek out the errant Reapers, long left scattered and return them to the fold.  In the mortal realm, Sarah Fields, mother to many and the woman who pulled Sissy from the river of blood that bore her, is dying.  When wily old Fox is sent for Sarah, her children make a plea: Give them until the next full moon to find their little brother Cyrus so that he may see his mother one last time.  Far away, in the trenches of France, Cyrus is stalked by a Reaper who means to make him his own.  As the war rages around them, Ginny and Big Alice arrive to see Cyrus confronting his unrelenting pursuer… the Reaper of War.”

HOW TO MAKE SENSE OF WAR

I’m always at something of a loss for words when it comes to reviewing some books, as I don’t feel like I’m entirely able to describe for you the reading experience.  This issue, this TITLE, is one of those situations.  Our story opens with Bones Bunny and Butterfly watching a bear attack a beehive.  Butterfly believes he is after the honey, but Bones explains that it’s actually the larvae that he’s after.  A conversation about balance and fairness ensues, and as the bees drive the bear away from their hive, Bones explains “Big things are often humbled by small.  That, too, is the way of things.”  Our story quickly transitions to the battlefields of France, seemingly circa World War I, as lost son Cyrus finds himself in the midst of battle, accompanied by Deathface Ginny, who has come to return him to his family.  The story moves back and forth through the battlefield, with Emma Rios’ art making for a beautiful and chaotic record of combat.  There is also an extended interaction between a native Frenchman and a young man from Brooklyn, facing their own mortality in the midst of the battle, with some truly enjoyable dialogue and interaction between them…

Of course, explaining the events of the issue is only a fraction of what’s actually within these pages, and there are metaphorical wheels within wheels turning in these pages.  As with every issue, the backmatter is as fascinating as the story itself, with Kelly Sue discussing what the death of David Bowie means to her and her creative processes, with additional insight into how the breakdown of the battle sequence was completed (since Ginny is only visible to Cyrus, what with existing as an embodiment of a universe constant and all.)  The reading experience here is an entrancing one for me, as I’ve enjoyed this series since the somewhat controversial #1 came out.  Often, reviewing comics means discussing the art and story as separate constructs, but that’s damn near impossible with ‘Pretty Deadly’, as you almost can’t separate the visuals from plot.  Suffice to say, if you like a complex story reminiscent of folk and fairy tales, with the occasional sudden hard edge to accidentally cut your metaphorical fingers, this is the book for you…

In short, it’s a very good issue, with art, color and story spun into a combined whole and a building tension that’s hard to bear, especially since (as with many creator-owned books) nearly ANYTHING can happen in these pages.  Pretty Deadly #8 is an issue full of metaphor and brutal combat, with the highest of stakes riding on a single human life, making for a complicated balance of power, earning 4.5 out of 5 stars overall.  Maybe it’s not a book for every reader, but those who are willing to take the plunge and embrace the premise and artful execution will find it vastly satisfying.

Philosophical discussion of war juxtaposed with the brutal reality, making for an engrossing bit of story...