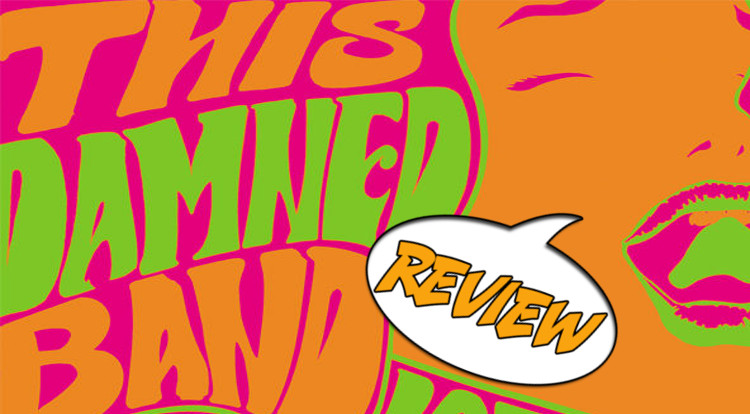 The Devil and rock and roll have been associated with each other, for bad or for worse, for a long time.  Does anyone really believe that those Satanic bands practice what they preach?  What if the devil was really in on it all?  Paul Cornell delivers This Damned Band from Dark Horse Comics, which takes a look at such a band and what happens when the Devil is their biggest fan.  Major Spoilers has your review! Previously in This Damned Band:  Man created rock and roll.  Or the devil, depending on who you ask.

Taking place in 1974, This Damned Band really captures the period and atmosphere of the rock scene during that time.  Paul Cornell drops the reader into the rock and roll lifestyle from the get-go, as we’re introduced to the members of Motherfather, a hugely popular band with some very unique characters.  The story is told in the form of a documentary being filmed about the band, in the same vein as Spinal Tap (for those old enough to remember that classic.  If not, go watch it after reading this).  Cornell allows us to see the band on camera as well as off while maintaining the film-like nature of the story.  It leads to some funny moments and is clear that the band doesn’t “practice what they preach”.  Though they may act like they’ve sold their souls, none of them believe it and are in it for the sex, women, drugs and…more drugs.  Each member is a caricature of certain types of rock stars.  There’s the slightly feminine lead vocalist (looking very much like Robert Plant), the “talent” and musical perfectionist guitarist, the free-loving spirit bassist, the married with multiple children rhythm guitarist and the “who gives a f@ck” drummer.  Each one is a hot mess in their own way and the scene where Kev’s wife comes barging into the backroom with their four children as he’s hunched over a table piled with numerous illegal substances had me dying from laughter (and a bit ashamed I’d find that funny).  Groupies are present at all times and we even get a glimpse at the band’s angry manager responsible for getting everything the band wants, including a pony.  At times it seems to be over the top but from stories I’ve heard about certain band’s backstage antics, it could be closer to the truth than we know.  Paul Cornell keeps the tone light throughout and while it’s fun to see the band’s real life persona versus their stage, the story suffers some from the constant running joke.  We know that Motherfather is attached to the occult, or practices black magic but not much information is given past the first few pages.  With the appearance of a demonic fan on the final page, I’m sure we’ll get to know more but for right now, the parody of the rock star lifestyle was enough to satisfy.

A TRIP AND A HALF

Tony Parker provides art that looks realistic enough to be believable yet with a certain styling that mixes with the humorous nature of the story.  It’s hard to put into words but the characters look incredibly detailed and lifelike but not enough that there is the “Greg Land effect”.  With the realism comes problems and many times the images are too still and faces come off looking very skewed at angles.  Coloring is great and blends with the art well and the standout scene for the artists is the drug trip near the end.  Once the band takes the “magic mushrooms”, the art changes to a morphed manga-esque style which is perfect since the band is playing in Tokyo.  Panels change shape and angles and the vibe of hallucination is captured quite well.  There isn’t much to complain about here and apart from some skewed faces and strange proportions, the art is great for this book.

BOTTOM LINE:  I WANT TO SEE HOW THIS SONG ENDS

This Damned Band #1 mixes some of my favorite things: comics, rock and roll, black humor and movies.  Paul Cornell makes the mixture work well and it reads very much like a Spinal Tap comic would I imagine.  While the rock star personas are funny, the joke wears off a bit by the end and some of the story is sacrificed for humor.  The art is great aside from a few nitpicks and is perfect for what the book is trying to do.  I’m excited for this one and can’t wait to see where the ride, or the devil, takes me next.

This Damned Band #1 is a good kickoff to a funny story with its toe slightly dipped in the pool of reality. I'm interested to see what the Devil has to say about all of this...